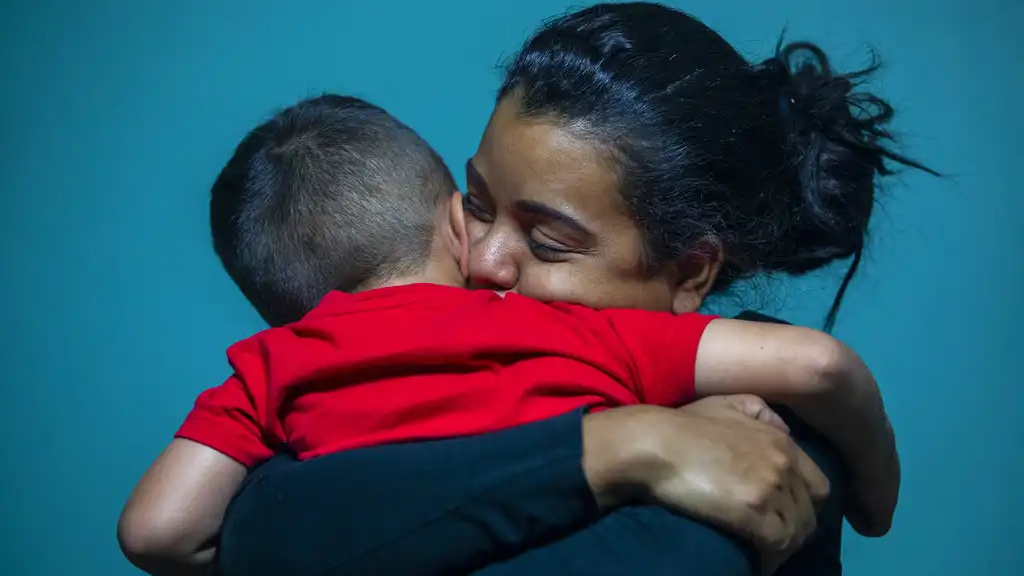 In this July 26, 2018 photo, Evelyn Zepeda cares for a four-year-old boy at her home in Austin, Texas. (AP Photo/Stephen Spillman)

The U.S. government's improvised system to reunite immigrant families it separated at the border has left hundreds of parents in limbo after they were deemed "ineligible" to get their children back.

They include a man who had his 2-year-old daughter taken because agents didn't believe he was the father, forcing him to submit DNA evidence to prove he was the parent.

Hundreds of parents were deported, including a family in Honduras losing patience each day their 11-year-old child remains in the U.S. A father in Guatemala prefers that his teenager remains in the U.S. because it's safer. A woman had her son given to her aunt and now remains in immigration detention due to a prior deportation.

The government and American Civil Liberties Union are waging a court fight over how to best reunify the families. U.S. District Judge Dana Sabraw on Friday said reunifications were solely the government's responsibility.

"The reality is that for every parent that is not located, there will be a permanently orphaned child, and that is 100 percent the responsibility of the administration," the judge said.

The Associated Press interviewed immigrants who remain separated from their children in multiple countries as well as their lawyers to capture the variety of ways the government has been unable to meet court-ordered deadlines to reunite families.

Here are their stories:

The government says it has encountered several cases where the adult coming across the border with the child was not a biological parent. They were determined to be not eligible to be reunited. At least one person was found to be wanted for murder in Guatemala, according to the government, and others accused of various crimes.

There was an apparent mistake in at least one case. Mario Perez Domingo and his 2-year-old daughter crossed into Texas on July 5. Even though the Trump administration had officially ended its policy of separating families at the border, Perez was arrested and charged with improperly entering the United States.

Agents thought Perez was the uncle and not the father, and the Texas Civil Rights Project intervened to present evidence the government was wrong.

U.S. Customs and Border Protection issued a statement that under questioning, Perez admitted that the child was actually his niece and that a smuggler had given him a false document in their native Guatemala.

But the project says Perez is from an indigenous community and has a poor command of Spanish. After the group obtained documents from the Guatemalan consulate showing he's the parent, the U.S. attorney dismissed the case against Perez on July 12.

On Wednesday, the group received word that DNA testing confirmed Perez was the girl's father. But Perez still remains in a detention facility, and his daughter is at a government shelter in Texas.

'THEY SHOULDN'T BE ALLOWED TO DO THIS'

Many parents say they signed deportation papers after being told they would get their children back in their home country, only for that promise to be broken.

The government says parents of about 400 children are outside the U.S., likely deported.

Eduardo Almendarez Meyer, 11, regularly sees other children leave the government facility where he is being held and get returned to their parents. In phone calls back to Honduras, he asks his mother if he'll see her again.

It's been more than two months since he and his father, Douglas Almendarez, were separated in Texas. Almendarez was deported to Honduras on June 13. His wife, Evelin Roxana Meyer, who stayed in their hometown to run their neighbourhood grocery store, said he was told when he signed his deportation papers that his son would be waiting for him in Honduras.

After he arrived in San Pedro Sula, Almendarez waited at the airport for days, with no information.

It took weeks for someone from the U.S. to call to say Eduardo was at a shelter in Brownsville, Texas. Eventually, they got a number where they could call him twice a week, for 10 minutes each time.

At first, Eduardo could not sleep and cried on the phone, saying he wanted to go back home, his mother said. He has since calmed down and made friends, but his anxiety is rising as he watches the friends leave the shelter one by one.

"He has been suffering, just as I have as his mother," Meyer said. "They shouldn't be allowed to do this."

The government counts 444 children as having been "discharged in other appropriate circumstances." Those circumstances included discharges to sponsors other than the parents — typically a relative — including situations where the "parent is not eligible for reunification."

It appears that the government is refusing to release some parents after their children were given to sponsors, because the parents had previously been removed from the U.S. and came back to seek asylum. The San Antonio-based Migrant Center for Human Rights identified at least two such cases.

One of the women still detained is Vivian, a 24-year-old woman from Honduras who entered the U.S. in late April and had her 3-year-old son taken and given to her aunt.

Vivian, who asked to be identified only by her first name out of fear of endangering her immigration case, was previously deported in November 2016.

Her aunt says she calls every day, crying, from the detention facility. Her aunt puts her son on the phone, so Vivian can repeat the story they've agreed to tell him: She's gone away for work but is coming back soon with an armful of toys for him.

"When he goes to sleep, he always says, 'Where's Mommy? She sleeps next to me,' and he starts to cry," his aunt said.

Sara Ramey, the migrant center's director, received a letter this week from ICE denying Vivian's request for release without further explanation. Ramey is working with another mother detained while her adopted son is with her adult daughter.

Some parents say they hoped that if they could not stay in America, their children would. The government says these immigrants "waived reunification," making them a lower priority.

Selvin Argueta Caal says he left Guatemala after his son received several death threats from gang members at his school. They wanted Selvin Jr. to sell drugs, but the 17-year-old refused.

They were detained and separated at the border on May 19th, one day after their arrival. While detained by the government, the father requested asylum and told the immigration officials that he feared for his son's life in Guatemala, but the request was denied.

He was deported to Guatemala and son was sent to a shelter for immigrant children in Houston. Caal hopes that a nephew can take in his son, but the relative apparently has been rejected by the government as a potential sponsor. When he turns 18, he will no longer be allowed in the shelter, throwing his future in doubt.

Caal says he waived reunification, but didn't know exactly what he was signing because he did not read or speak English, and nobody translated the document to him.

"I want him to at least have freedom, that he can study and work, and that he is no longer in danger," Caal said. "Although he is far away, he is safe, without the bad things happening here."

Trump willing to shut down government over border security