In Iraq’s Mosul, many survivors face future as amputees 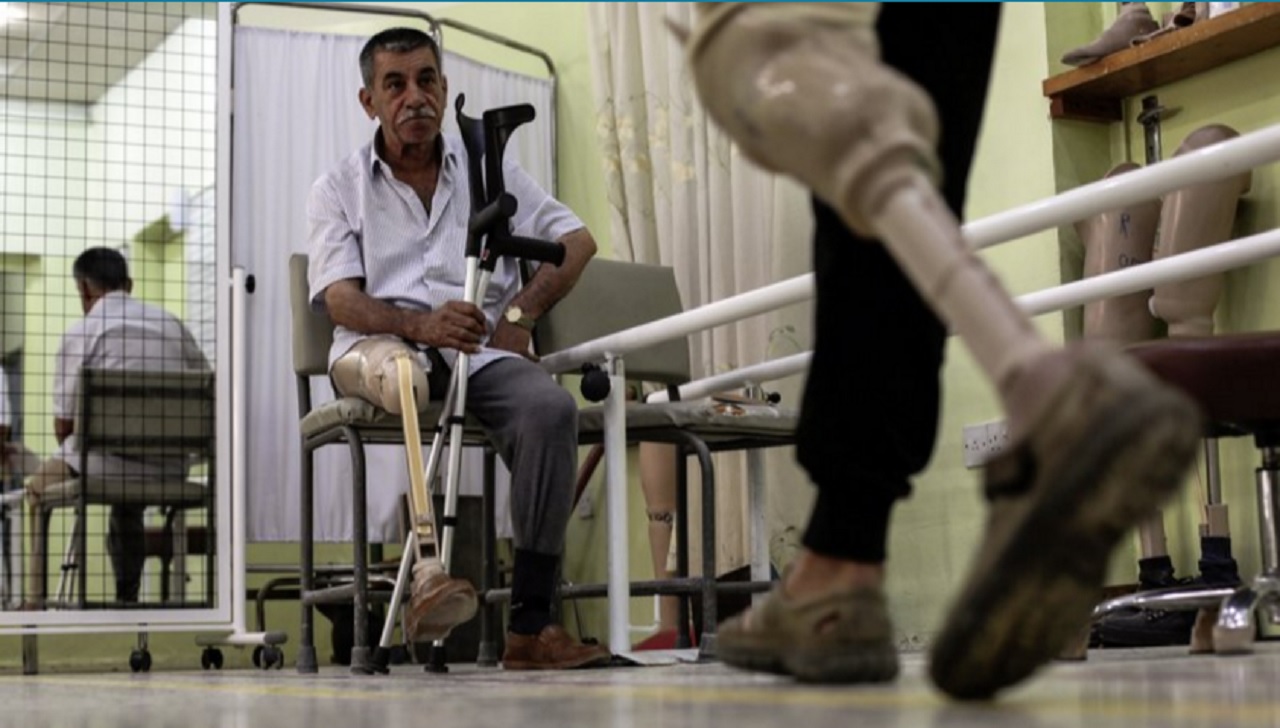 In this Wednesday, May 10, 2017 photo, a man watches another another patient practice walking on his prosthetic leg in the International Committee of the Red Cross prosthetics clinic in Irbil, Iraq. The fight to retake Mosul has left more than 12,000 civilians injured and for many that has meant the loss of a limb.

The young Iraqi woman remembers the night she lost her leg.

Wihad Ahmed and her family had hunkered down in their house in western Mosul, hoping to wait out the nearly constant shelling as fighting raged between Islamic State militants and advancing Iraqi government forces.

But after mortar shells destroyed the homes of their next-door neighbours, the 27-year-old and her relatives decided to flee.

With four other families, they left in the middle of the night on April 1. Before they reached Iraqi lines, a bomb went off, wounding Ahmed’s right leg so badly that it had to be amputated above the knee.

According to the International Committee of the Red Cross (ICRC), she is one of at least 625 people from Mosul who have lost an arm or a leg as the nearly seven-month-old battle for the city. Like others, she is struggling to come to terms with her injuries and the future she faces as an amputee.

The United Nations says more than 12,000 Mosul civilians have been wounded, a count that only includes those who have made it to hospitals outside the city to receive treatment. In the first three months of this year, a small orthopedic facility run by the ICRC has treated 148 people from Mosul who lost limbs.

At the main hospital in Qaraqosh, a town near Mosul, Ahmed balances at the edge of her bed, slowly raising and lowering her right thigh as a physical therapist watches over her. After the exercise was done, she gingerly stood up and balanced herself on her left leg — something she said got easier only after weeks of practice.

“I can say that it’s cured. In the beginning it was swollen this big,” she said, looking down on the stump of her right leg and spreading her hands wide to show the extent of the swelling.

Soon the doctors will be able to fit her with a prosthetic, and if she keeps up the exercises, in about three months, she will be able to walk without crutches, she says.

At an orthopedic facility in the city of Irbil, about 90 kilometers (56 miles) away, half a dozen amputees practice simple movements with new prosthetic legs.

Mohammed Kahlan confidently walked the length of the room in smooth strides. The Sunni tribal fighter from western Anbar province lost his left leg while fighting IS a year ago but it took him an entire year to learn how to walk again, he said.

The only properly equipped orthopedic facilities are in Baghdad and Irbil. Kahlan says he initially had to travel for treatment to the Iraqi capital, relying on military flights because civilian flights had been suspended and the roads were blocked.

“The hardest thing was having to travel to Baghdad every time by plane,” he said.

While the fighting drags on, with Iraqi forces and U.S.-led coalition officials saying it could be weeks more before all of Mosul is brought under government control, access to medical assistance remains one of the biggest challenges for residents with grave but not life-threatening injuries.

To get to a doctor, they have to pass through a myriad of military checkpoints now ringing the city, and Iraqi troops are often suspicious of the townspeople, who had lived for nearly three years under IS rule.

Several aid organizations have physical therapists visiting camps for displaced civilians on Mosul’s outskirts, showing people who have lost one or more limbs how to strengthen their muscles, to prepare them for prosthetic limbs.

Many of the amputees didn’t even realize they would not have to spend the rest of their lives in a wheelchair.

Iraqi boys’ harrowing tale of captivity, training by IS