Israel, US team up to block UN vote on Jerusalem 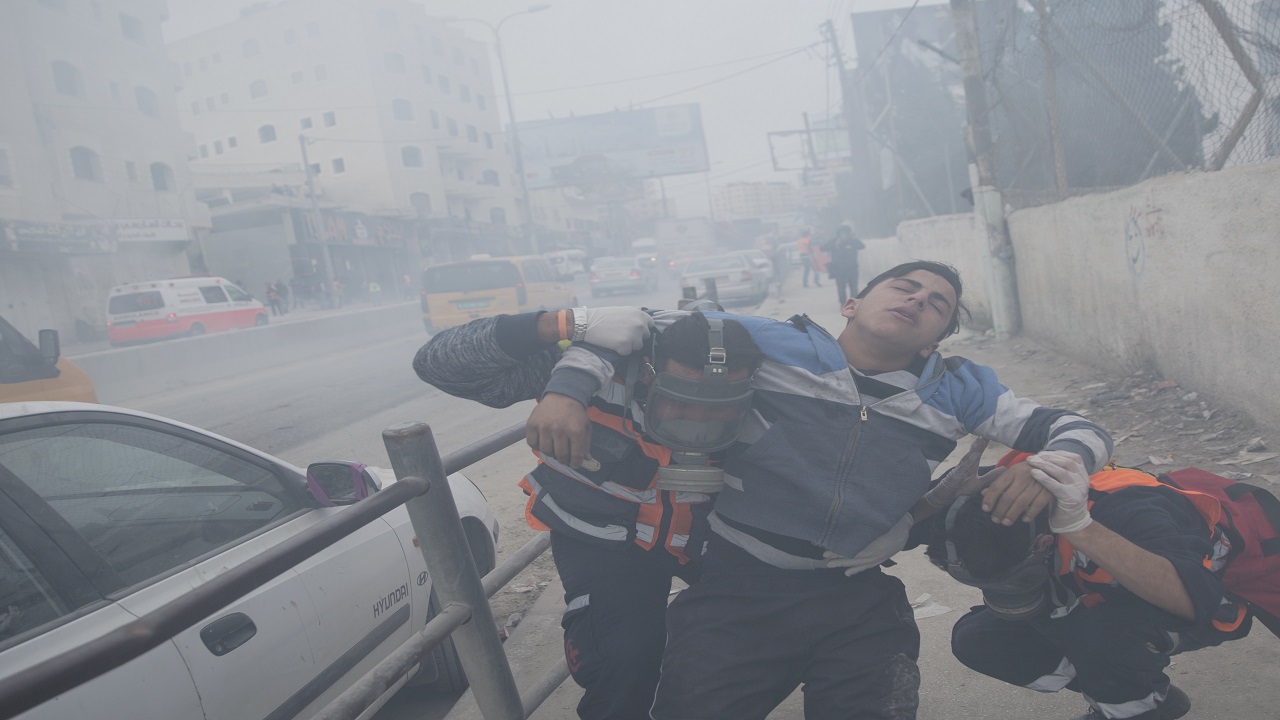 Two paramedics evacuate an injured Palestinian protester amid heavy teargas, during clashes with Israeli troops following protests against U.S. President Donald Trump's decision to recognize Jerusalem as the capital of Israel, at the outskirts of the West Bank city of Ramallah, Wednesday, Dec. 20, 2017.

Thursday's vote in the U.N. General Assembly will indicate whether Prime Minister Benjamin Netanyahu has succeeded in his efforts to drum up new pockets of support in the developing world, as well as the extent to which Israel and the U.S. are — or are not — alone on the question of Jerusalem.

The U.S. and Israel are both placing great weight on Thursday's vote. U.S. Ambassador Nikki Haley threatened U.N. member states with possible retaliation if they support the resolution, saying Trump takes the vote "personally" and the U.S. "will be taking names." Critics accused the U.S. of intimidation.

Israel's deputy foreign minister, Tzipi Hotovely, said that the U.S. and Israel were making "immense efforts" to block the resolution.

"We have a very, very simple message: Jerusalem is the capital of the Jewish people for 3,000 years and the capital of Israel for almost 70 years," she told Channel 10.

An Israeli Foreign Ministry official confirmed the government was making a "very vast" lobbying campaign to minimize the resolution's impact.

He said Israel is trying to persuade allies to abstain or even vote against it. He also said that Israel has asked Jewish organizations in certain countries to lobby their governments on Israel's behalf.

The official, speaking on condition of anonymity because he was discussing sensitive diplomatic contacts, refused to identify which countries Israel has approached or say how he expects them to vote. But he said he thinks the campaign will be "successful to a certain extent."

In some ways, the vote is a test of Netanyahu's foreign policy. In recent years, the Israeli leader has invested great efforts to look beyond Israel's traditional allies in Washington and Western Europe and cultivate ties with developing nations that have traditionally been supportive of the Palestinians.

He has portrayed these efforts as both a savvy strategy aimed at opening new markets for Israeli technology exports, as well as countering what Israel says is a deep-seated bias against it at the United Nations.

This year alone, Netanyahu has visited China and hosted India's prime minister, Narendra Modi. He also has attended two summits in Africa, meeting with a host of leaders from across the continent, and in September, became the first sitting Israeli prime minister to visit Latin America with stops in Argentina, Mexico and Colombia.

The votes cast by these countries will provide an indication about whether the diplomatic outreach is paying off.

Votes by other key allies with traditionally close ties to Israel, including Germany, Britain, Australia, Canada and smaller European countries like the Netherlands, Poland and Hungary, could also provide valuable indicators about support for the U.S.-Israeli approach.

Many of these countries either abstained or opposed a landmark 2012 vote in the General Assembly that recognized Palestine with upgraded status as a nonmember state.

The Israeli official said a single vote at the U.N. on Thursday would not determine the success of Israel's diplomatic outreach. But he said "this is certainly part of it."

A draft of the U.N. resolution obtained by The Associated Press calls for affirming that any actions that "have altered the character, status or demographic composition of the Holy City of Jerusalem" have no legal effect and must be rescinded. It also calls upon all states "to refrain from the establishment of diplomatic missions" in Jerusalem.

Palestinian Foreign Minister Riad Malki, who was in New York for the vote, called the U.S. threats "dangerous" and predicted that they would not have a major impact. "We believe that there is world consensus against the U.S. decision on Jerusalem. This was clearly reflected in the Security Council, despite the U.S. veto," he told the AP.

Trump shattered decades of U.S. neutrality on Jerusalem on Dec. 6 when he recognized the holy city as Israel's capital and said he will move the U.S. Embassy there.

Trump said the move was not meant to prejudge negotiations on the final borders of the city, and instead merely recognized reality since Jerusalem already serves as Israel's capital.

But the announcement was widely perceived as taking the side of Israel in the most sensitive issue of the Israeli-Palestinian conflict.

The Palestinians claim east Jerusalem, home to key Muslim, Jewish and Christian holy sites, and which Israel captured and annexed in 1967, as the capital of a future state. The international community has said the status of Jerusalem should be decided in negotiations between Israel and the Palestinians.

Netanyahu has repeatedly praised Trump's decision and said he expects other nations to follow suit. But so far, the announcement has triggered mostly denunciations and demonstrations around the world.

Palestinian President Mahmoud Abbas' Fatah movement and other groups have organized mass protests while its rival, the Gaza-based Islamic militant group Hamas, has called for a third violent uprising against Israel. In all, eight Palestinians have been killed, most in clashes along the Gaza border with Israel.

The unrest continued on Wednesday as dozens of Palestinians clashed with Israeli forces in the West Bank town of Bethlehem, where protesters burned a large American flag and hurled stones at the Israelis. Demonstrators also scuffled with Israeli police in east Jerusalem and along the Gaza border.

Abbas has said that the U.S. can no longer serve as the sole Mideast mediator, and he has been trying to rally support in Europe and the Arab world.

On Wednesday, Abbas was meeting with leaders of Saudi Arabia, an influential country believed to have low-level but warming ties with Israel, before heading to France.

Mideast braces for fallout from Trump's move on Jerusalem