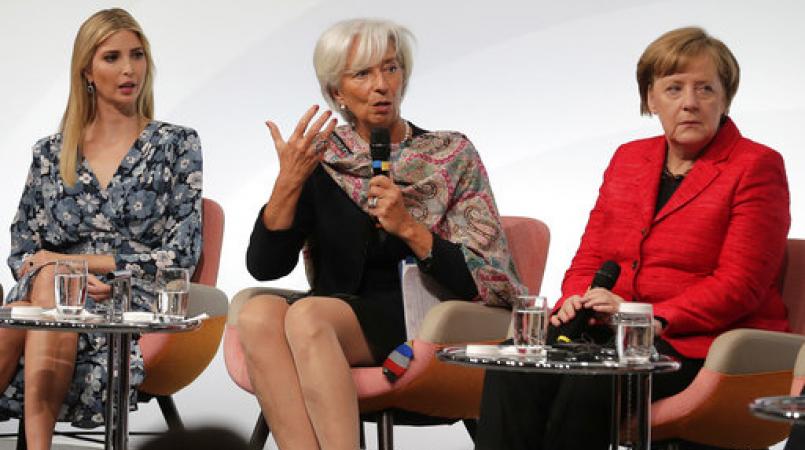 Ivanka Trump is joining Chancellor Angela Merkel and others in Berlin on Tuesday for talks on encouraging women's economic empowerment on her first international outing as a White House adviser.

The Latest on Ivanka Trump's trip to Berlin (all times local):

Ivanka Trump says she's still "rather unfamiliar" with the role of first daughter and is stressing that, as a White House adviser, she doesn't represent her business.

Trump stepped away from running her fashion brand to take the unpaid White House role. At a panel discussion in Berlin on Tuesday, the moderator asked whether she represents President Donald Trump, the American people or her business.

Ivanka Trump replied: "Certainly not the latter, and I am rather unfamiliar with this role as well, as it is quite new to me." She added that "it has been a little under 100 days but it has just been a remarkable, incredible journey."

Trump said of her relationship with the president that "we're very aligned in many, many areas and that's why he's encouraged me to fully lean into this opportunity and come into the White House."

President Donald Trump has tweeted that he's proud of his daughter's leadership on improving women's place in the economy.

Ivanka Trump, who is a White House adviser, was speaking Tuesday in Berlin at the W20 Summit, a women-focused effort within the Group of 20 countries. Ahead of the trip, she co-authored an opinion piece in the Financial Times calling for more global efforts to invest in women's economic empowerment.

President Trump tweeted that article Tuesday, adding: "Proud of @IvankaTrump for her leadership on these important issues. Looking forward to hearing her speak at the W20!"

Ivanka Trump says she is "listening and learning" to define how she can help advance women's economic empowerment in the U.S. and beyond.

Trump, the first daughter and a White House adviser, said during an appearance alongside German Chancellor Angela Merkel and others at a panel discussion in Berlin on Tuesday that she was "humbled to be here with so many formidable leaders."

Trump says she plans "to bring the advice, to bring the knowledge, back to the United States, back to both my father and the president — and hopefully that will bring about incremental, positive change. And that is my goal."

Trump is speaking at the W20 Summit, a women-focused effort within the Group of 20 countries.

Ivanka Trump is defending her father's stance toward women and calling him "a tremendous champion of supporting families."

Asked about President Donald Trump's past attitudes toward women, the White House adviser told a conference in Berlin: "I've certainly heard the criticism from the media, and that's been perpetuated."

But she added that her own personal experience and that of the women who have worked with and for Trump for decades "are a testament to his belief and solid conviction in the potential of women and their ability to do the job as well as any man."

She said her father "encouraged me and enabled me to thrive. I grew up in a house where there was no barrier to what I could accomplish beyond my own perseverance and my own tenacity."

Ivanka Trump is in Berlin on her first international outing as a White House adviser, where she will join German Chancellor Angela Merkel to discuss ways to encourage women's economic empowerment.

Trump and Merkel are on a panel discussion Tuesday as part of the W20 Summit, a women-focused effort within the Group of 20 countries, entitled "Inspiring women: Scaling up women's entrepreneurship."

Trump will also visit a technology college run by the Siemens company and go to the German capital's memorial to the 6 million Jews murdered by the Nazis.

Trump stepped away from running her fashion brand to take a role as an unpaid White House adviser in her father's administration. She has spent time talking about women's empowerment, often at White House forums and roundtables.