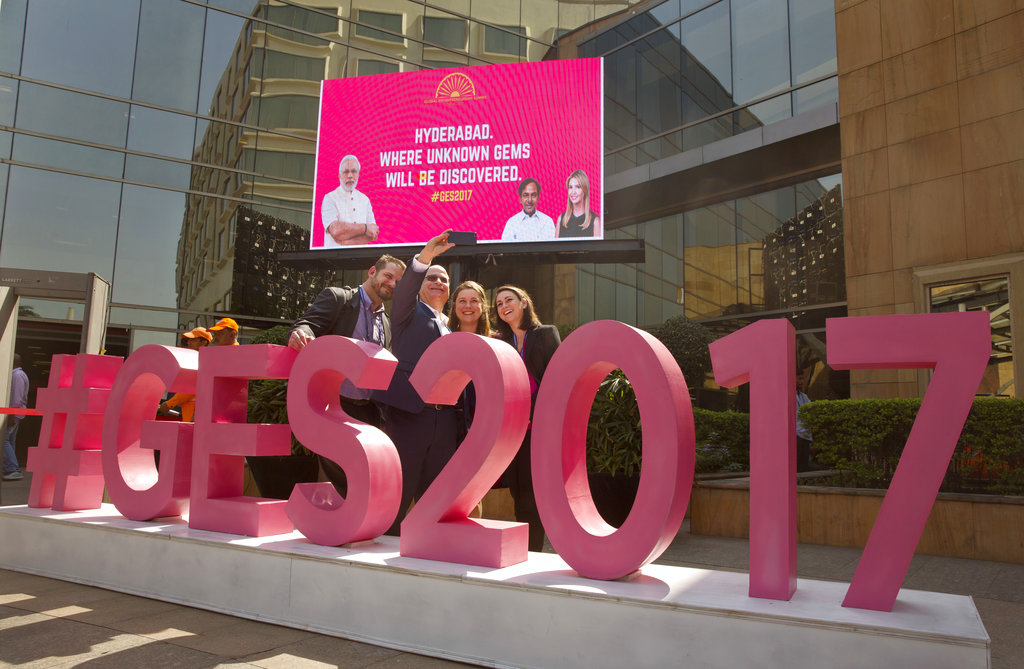 Foreign delegates take a selfie at the venue of the Global Entrepreneurship Summit in Hyderabad, India, Tuesday, Nov. 28, 2017. U.S. President Donald Trump's daughter, Ivanka Trump, is making a significant solo outing by headlining a business conference in India, but her trip highlights questions about whether her message of empowering poor women matches her actions. (AP Photo/Mahesh Kumar A.)

Ivanka Trump is making a significant solo outing by headlining a business conference in India, but her trip highlights questions about whether her message of empowering poor women matches her actions.

Trump landed Tuesday in the southern city of Hyderabad and is scheduled to make the opening address at the Global Entrepreneurship Summit later in the day.

"Thank you for the warm welcome," Trump tweeted. "I'm excited to be in Hyderabad, India for #GES2017."

The city has cleared away beggars and filled potholes ahead of the visit by Trump, the daughter of President Donald Trump and a senior presidential adviser.

Indian Prime Minister Narendra Modi will join her at the opening and will later host her for dinner at the luxurious Falaknuma Palace Hotel.

Many in India are excited about Trump appearing at the conference, which is being co-hosted by the United States and India.

"It's cool that she's coming," said Amani Bhugati, a medical student. "She's glamorous, beautiful and powerful. It's like a combination of Hollywood and politics."

Others marveled at the improvements made around Hyderabad. "All new," said Gopal, a taxi driver who gave only his first name.

But he also pointed to the potholes that remain on many smaller streets. "She's not coming here, so they didn't fix it," he said.

More than 1,200 people are expected to attend the three-day conference, although not everyone is thrilled about Trump's presence.

"It's now being called Ivanka Trump's summit. It totally overshadows all our work," said Sangeeta Agarawal, the chief executive of U.S. startup Helpsy Health. "We feel that's it become more about her."

And the conference's focus on female entrepreneurs raises questions about some of the commercial decisions made by Trump and her famous namesake brand.

Critics have faulted her for failing to use her leadership role to call out labor and human rights abuses, particularly in China, where the bulk of her U.S. merchandise ships from. And they point out that she has failed to take a public stand on alleged abuses in her brand's own supply chain.

Trump stepped back from day-to-day management of her brand before taking on an official role as White House adviser, but still retains an ownership interest.

Abigail Klem, president of the Ivanka Trump brand, has called supply chain integrity "a top priority," but the brand has not joined the growing number of companies that publicly identify their manufacturers.

A September investigation by The Associated Press showed that Trump's supply chain has become more opaque than ever since she took on her White House role, making it impossible to know who her company is doing business with around the world. The brand has said supply chains are the responsibility of its licensees.

Earlier this month, 23 rights groups signed a letter urging Trump, her brand and two licensees to publish the names and addresses of suppliers.

They also urged Trump and her brand to publicly demand that the Chinese government not prosecute three activists detained this past summer while investigating the brand's supply chain, and allow independent monitoring of factories.

In India, the cleanup of Hyderabad, a southern technology hub, began a month ahead of the conference, when the city began rounding up several hundred homeless people and beggars.

Officials said the drive against begging was launched because two international events were taking place in the city — the entrepreneurship summit and the World Telugu Conference in December. Begging is a criminal offense in India and can be punished by as much as 10 years in prison, although the law is rarely enforced.

Beggars tend to crowd around cars at traffic signals, knocking on windows and asking for food and money. They include children as young as 5, who weave through dangerous traffic and often perform small acrobatic acts.

At least one traffic overpass on the road that leads to the city from the airport has been painted in the colors of the rainbow. At night, laser beams dance across the overpass, turning a routine traffic stoplight into a psychedelic experience.

The annual entrepreneurship conference has a theme this year of "Women first, prosperity for all," and involves networking, mentoring and workshops.

Trump is expected to host at least two panel discussions, where she will be joined by Indian Defense Minister Nirmala Sitharaman, before leaving Wednesday. She is not planning to address the media during the trip.