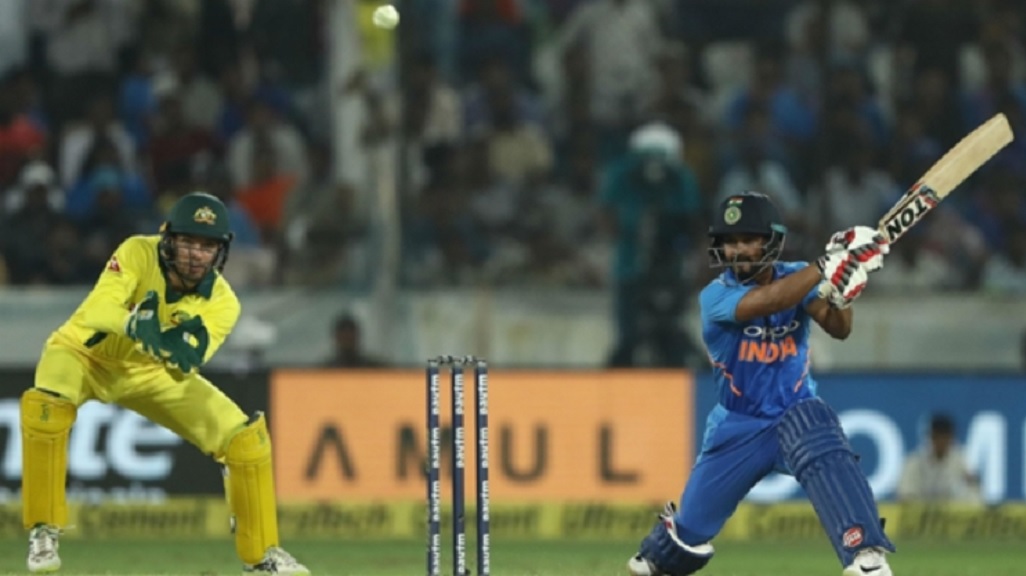 Unbeaten half-centuries from Kedar Jadhav and MS Dhoni sealed a six-wicket victory for India in the opening One-Day International (ODI) against Australia in Hyderabad.

Australia won both Twenty20 Internationals between the sides, but Virat Kohli's side came out on top in the first of five ODIs on Saturday courtesy of an unbroken stand of 141 from Jadhav and Dhoni.

The match was in the balance when Nathan Coulter-Nile and Adam Zampa reduced India to 99-4, but Jadhav and Dhoni came to the rescue with superb knocks of 81 and 59 respectively.

Aaron Finch was caught behind off Bumrah without scoring after winning the toss in his 100th ODI, but Khawaja and Marcus Stoinis prevented further early damage from being done.

The excellent Shami and Bumrah kept it tight before Khawaja launched Kuldeep's third ball for six and Stoinis looked well set before whipping Jadhav to Virat Kohli at midwicket, ending a stand of 87.

Khawaja reached his half-century from 74 balls, but was on his way when Vijay Shankar took an excellent catch for Kuldeep and Australia were 133-4 after the spinner removed Peter Handscomb.

Glenn Maxwell - promoted to number five after his Twenty20 heroics - timed the ball sweetly as he struck five boundaries before being cleaned up by Shami, who also bowled Ashton Turner.

Alex Carey (36 not out) and Nathan Coulter-Nile (28) added 62 for the seventh wicket but the India bowlers did a great job of restricting the tourists to a what appeared to be a below-par total.

Australia needed to make early inroads and Coulter-Nile removed Shikhar Dhawan, caught at point for a golden duck. However, Rohit Sharma and Kohli steadied the ship in a patient stand.

Rohit rode his luck and took a blow on the arm from Pat Cummins after the more fluent Kohli hooked the paceman for six, but Zampa dealt a big blow to India by trapping the captain leg before for 44.

Jadhav and Dhoni dug in on a tricky track, though, and the former captain slapped Coulter-Nile over his head for six to ease the tension, with Jadhav reaching his fifty off 67 balls and bringing up the hundred stand by casually guiding Cummins for four.

Dhoni needed treatment for what appeared to be cramp, yet he looked untroubled as he also passed 50 prior to striking Stoinis for back-to-back boundaries to secure victory with 10 balls to spare.

Windies to face Australia and Pakistan at 2020 T20 World Cup