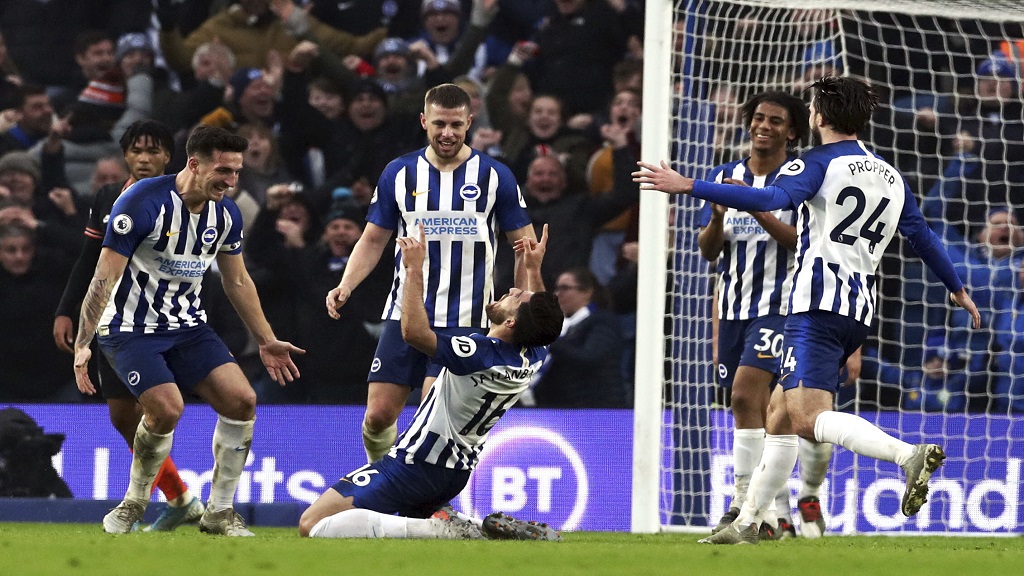 Jahanbakhsh started 2020 in style after only breaking a 20-match league goal drought in the 2-0 win over Bournemouth on Saturday.

The goal on Wednesday canceled out the tap-in from Chelsea captain Cesar Azpilicueta in the 10th minute.

Christian Pulisic will look at three wasted openings that ultimately stopped Chelsea cementing their dominance, denying the fourth-place side another away victory after Sunday's 2-1 win at Arsenal.

The American dragged a shot wide from a well-worked and promising position.

The forward had tormented Martin Montoya throughout the first half and outfoxed him twice in quick succession after the break, but he failed to find the target on both occasions.

Over at Turf Moor: Jack Grealish capped an impressive display by clinching Aston Villa's 2-1 victory at Burnley after he endured VAR frustration.

The playmaker headed in a cross in the 11th minute, only for a lengthy review to rule it out for a marginal offside after extensive analysis of the position of Wesley's heel in the buildup.

When Wesley did open the scoring in the 27th, the away fans waited for the VAR check to be complete before they celebrated, leading the Villa striker to think his goal had been disallowed. Villa had taken full advantage of hesitant defending as Grealish clipped a ball in for Wesley to control on his chest and volley between the legs of goalkeeper Nick Pope.

Grealish then netted the second in the 41st with a powerful strike into the top corner.

Burnley pulled one back through Chris Wood's header in the 80th but struggling Villa held on for a vital win after manager Dean Smith made five changes from the side that lost to Watford on Saturday and switched to a three-man defense.