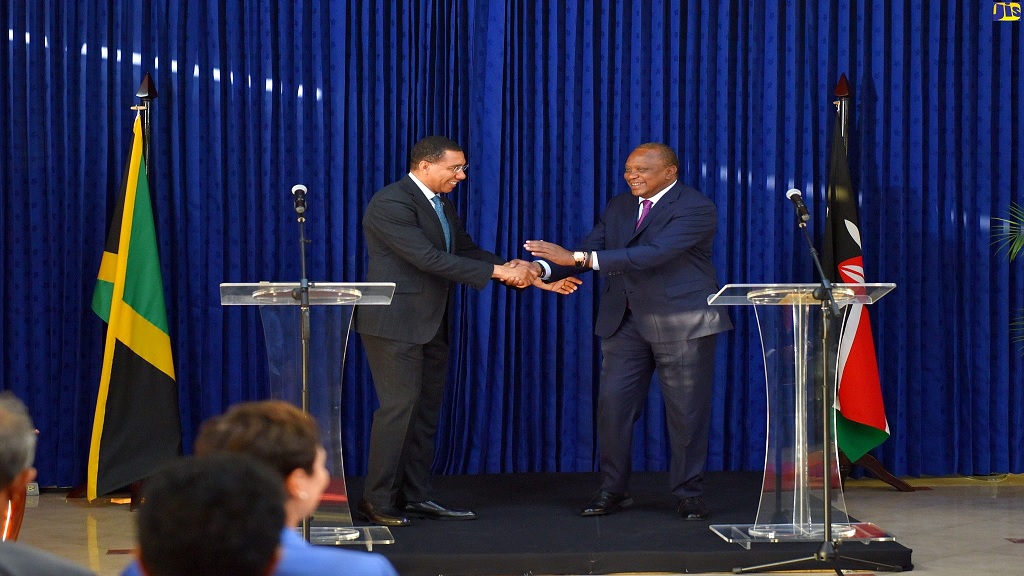 Prime Minister Andrew Holness (left), and President of the Republic of Kenya, Uhuru Kenyatta, shake hands after delivering statements at a joint press conference at the Office of the Prime Minister on Monday. (PHOTO: JIS)

Jamaica and the Republic of Kenya signed three Memoranda of Understanding and a framework agreement at Jamaica House on Monday as part of the three-day state visit by Kenyan President Uhuru Kenyatta to the island.

The MOUs and framework agreement are expected to strengthen ties between the two countries in political consultation, tourism, sports, culture and heritage.

Kenyatta and wife Margaret Gakuo Kenyatta, were invited to the island to be guest of state during the island's independence anniversary celebrations.

According to Prime Minister Andrew Holness, there is a growing relationship between both countries, indicative of Kenya recently appointing its first high commissioner to Jamaica.

He said that both countries need to create measurable economic and commercial activities as they are showing similar macroeconomic results, with Kenya being among the 10 fastest growing economies in Africa.

Meanwhile, Kenyatta said that the visit will deepen bonds of friendship between the two countries, with the intention to increase the level of bilateral relations.