Japan floods leave up to 34 dead, many at nursing homes 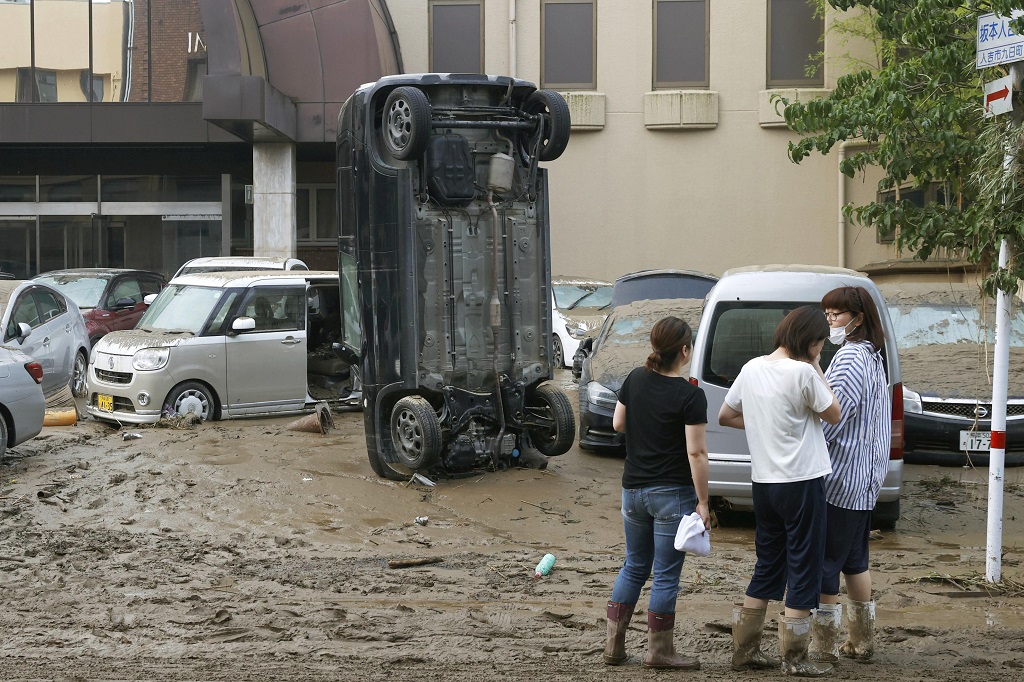 A car stands vertically on a muddy road after being washed away by flood, in Hitoyoshi, Kumamoto prefecture, southwestern Japan, Sunday, July 5, 2020. Heavy rain in the Kumamoto region triggered flooding and mudslides Saturday and left dozens still being stranded at their homes and other facilities. (Kyodo News via AP)

Deep floodwaters and the risk of more mudslides that left at least 34 people confirmed or presumed dead hampered search and rescue operations Sunday in southern Japan, including at elderly home facilities where more than a dozen died and scores were still stranded.

Helicopters and boats rescued more people from their homes in the Kumamoto region.

More than 40,000 defense troops, the coast guard and fire brigades were taking part in the operation.

Large areas along the Kuma River were swallowed by floodwaters, with many houses, buildings and vehicles submerged almost up to their roofs. Mudslides smashed into houses, sending people atop rooftops waving at rescuers.

At a flooded elderly care home in Kuma Village, where 14 residents were presumed dead after rescuers reached them on Saturday, rescue continued Sunday for the dozens of remaining residents and caregivers. These persons are also amongst the most vulnerable during this COVID-19 pandemic. Only to have their efforts of social distancing and surviving COVID-free thwarted by this natural disaster.

Sixty-five residents and about 30 caregivers were trapped at the riverside care facility Senjuen when floodwaters and mud gushed in.

All remaining 51 residents, including three who had hypothermia, had been rescued by boats and taken to hospitals for treatment by Sunday afternoon, officials said.

Shigemitsu Sakoda, a local rafting company operator who joined defense troops in the rescue effort at the nursing home, said floodwaters were still high on the first floor when they arrived at the scene on rafts. "So we smashed windows with a hammer to get in," he told Japanese broadcaster NHK. Soldiers went up to the roof to rescue survivors who were able to go upstairs while the waters rose, he said.

"Unfortunately, some of the residents could not make it to the second floor" Sakoda said.

Overall, 18 people were confirmed dead, while 16 others, including those at the nursing home, were presumed dead. Fourteen others were still missing as of Sunday afternoon. Dozens of others were still trapped in inundated areas waiting to be rescued, according to the Fire and Disaster Management Agency.

In Hitoyoshi City, the deluge poured into houses near the main train station. "The water rose to the second floor so fast and I just couldn't stop shivering," a 55-year-old woman who was visiting her relatives told the Asahi newspaper.

She and her relatives ran upstairs, swam out of a window and eventually took refuge on the roof to wait for their rescue.

As floods eased in parts of Kumamoto on Sunday, vending machines and cars lay scattered on mud-coated streets. Some people were cleaning their homes, taking out damaged furniture and rinsing off mud.

More than 200,000 residents in Kumamoto prefecture were urged to evacuate following pounding rains on Friday evening and into Saturday. But the evacuation was not mandatory and many people opted to stay home because of concerns over catching the coronavirus disease 2019 (COVID-19), even though officials say shelters are adequately equipped with partitions and other safety measures.

Flooding also cut off power and communication lines, further delaying the search and rescue. Nearly 6,000 homes in Kumamoto were still without electricity Sunday, according to the Kyushu Electric Power Co.

The rainfall that exceeded 100 millimeters (4 inches) per hour has since subsided, but the Japan Meteorological Agency kept mudslide warnings in place across Kumamoto. Prefectural officials said evacuation advisories were still in place due to more rain in the forecast.