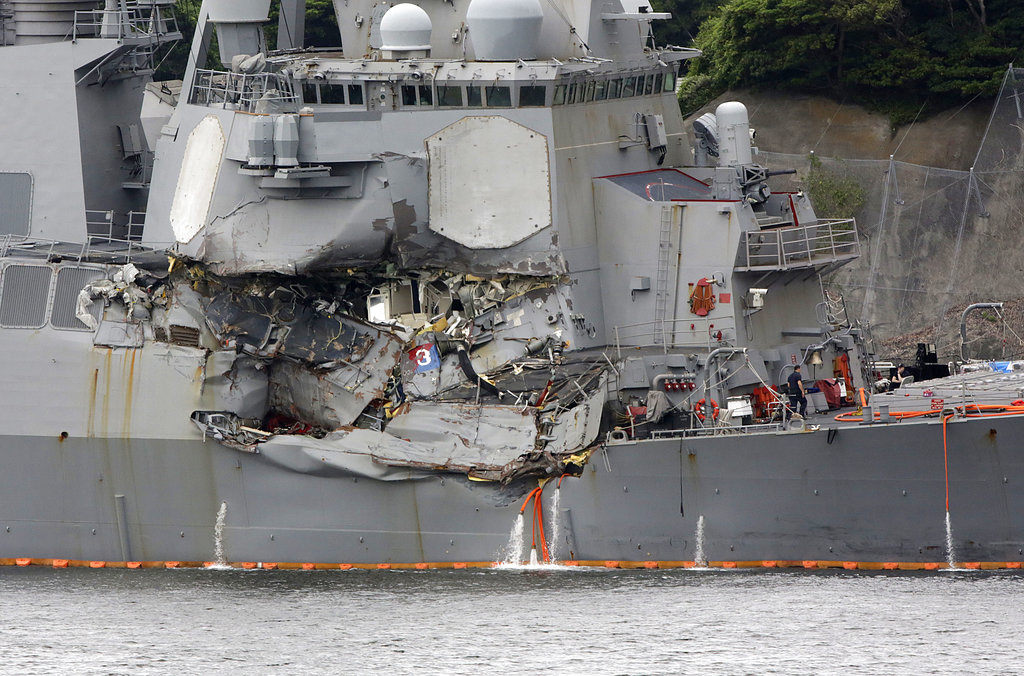 Damaged part of USS Fitzgerald is seen at the U.S. Naval base in Yokosuka, southwest of Tokyo Sunday, June 18, 2017. Navy divers found a number of sailors' bodies Sunday aboard the stricken USS Fitzgerald that collided with a container ship Saturday in the busy sea off Japan. (AP Photo/Eugene Hoshiko)

Japan's coast guard is investigating why it took nearly an hour for a deadly collision between a U.S. Navy destroyer and a container ship to be reported.

A coast guard official said Monday they are trying to find out what the crew of the Philippine-flagged ACX Crystal was doing before reporting the collision off Japan's coast to authorities 50 minutes later.

The ACX Crystal collided with the USS Fitzgerald off Japan's coast, killing seven of the destroyer's crew of nearly 300. The ships collided early Saturday morning, when the Navy said most of the 300 sailors on board would have been sleeping. Authorities have declined to speculate on a cause while the crash remains under investigation.

A track of the much-larger container ship's route by MarineTraffic, a vessel-tracking service, shows it made a sudden turn as if trying to avoid something at about 1:30 a.m., before continuing eastward. It then made a U-turn and returned around 2:30 a.m. to the area near the collision.

Coast guard official Tetsuya Tanaka said they are trying to resolve what happened during the 50 minutes.

He said officials are planning to get hold of a device with communication records to examine further details of the crash. Japan's Transport Safety Board also started an accident investigation Monday.

Nanami Meguro, a spokeswoman for NYK Line, the ship's operator, agreed with the revised timing of the collision.

Meguro said the ship was "operating as usual" until the collision at 1:30 a.m., as shown on a ship tracking service that the company uses. She said the ship reported to the coast guard at 2:25 a.m., but she could not provide details about what the ship was doing for nearly an hour.

"Because it was in an emergency, the crewmembers may not have been able to place a call," she said.

Coast guard officials are investigating the case as possible professional negligence, but no criminal charges have been pressed so far.

On Monday, the Navy's 7th Fleet identified the seven sailors who died. Navy divers recovered the bodies after the severely damaged Fitzgerald returned to the fleet's home in Yokosuka, Japan, with assistance from tug boats.

In a statement, acting Navy Secretary Sean Stackley said, "We are all deeply saddened by the tragic loss of our fellow shipmates. ... As details emerge, we can all be proud of the heroic effort by the crew to tend to the needs of those injured and save the ship from further damage while returning safely to port."

He thanked "our Japanese allies" for their swift assistance, and said the Navy will fully investigate the cause.

The mother of a Navy sailor on board the ship said her son kept diving in his flooded berth to try to save his shipmates until it began running out of air pockets, while other survivors — believing their ship was under attack — hurried to man the guns.

Mia Sykes of Raleigh, North Carolina, told The Associated Press on Sunday that her 19-year-old son, Brayden Harden, was knocked out of his bunk by the impact and water immediately began filling the berth.

Sykes said her son told her that four men in his berth died, including those sleeping on bunks above and below him, while three died in the berth above his.

She said she hopes her son, from Herrin, Illinois, can come home to be with family as he works through what happened. "You have to realize most of them are 18-, 19- and 20-year-olds living with guilt. But I told him, 'There's a reason you're still here and make that count.'"

Japan PM: NKorea may be capable of sarin-loaded missiles

US, Japan search for 7 Navy sailors, puzzle over ship crash