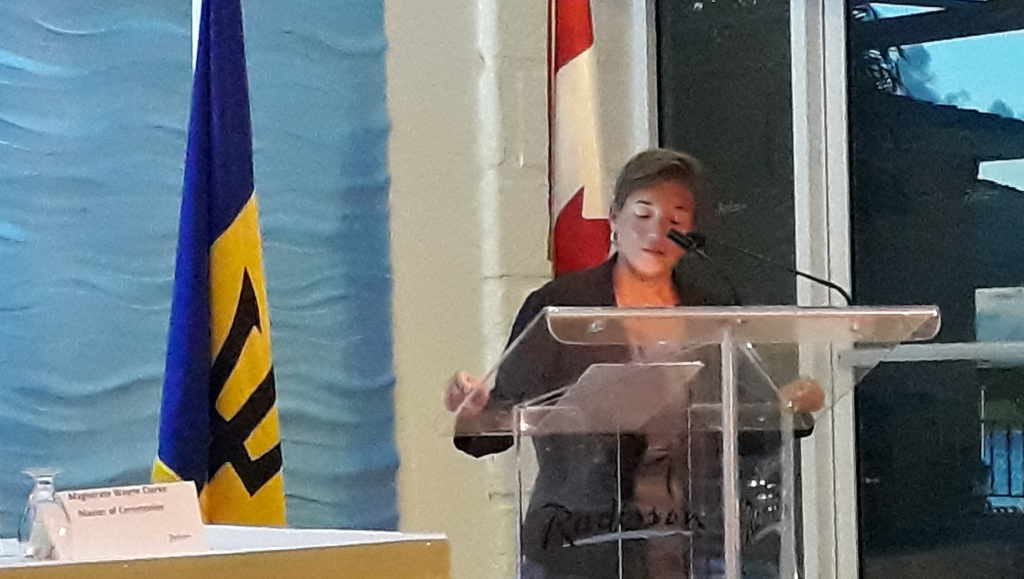 High Commissioner of Canada to Barbados and the Eastern Caribbean, Marie Legault giving remarks at the closing ceremony

Judicial officers in Barbados working with counterparts across the region are taking an introspective look at their approaches to administering justice for all without barriers of gender bias or other impediments.

“I think we are going in the right direction,” observed Acting Chief Magistrate Ian Weekes during remarks on Saturday, December 7, 2019, at the closing ceremony of the Gender Sensitive Adjudication & Training workshop. The training, held December 6-7, was organized by the Canadian-funded Judicial Reform and Institutional Strengthening (JURIST) Project in the Caribbean in partnership with the Judiciary of Barbados. It was the second of a three-part training program, with the third scheduled for early next year.

Weekes, one of the 10 magistrates, 18 judges and other participants who took part in the training held at the Radisson Aquatica Resort, described the interactive sessions as “refreshing” and beneficial to have a more open-minded approach “as to what we can achieve as judicial officers.”

Registrar of the Barbados Supreme Court Barbara Cooke-Alleyne noted the training presentations and discussions assisted in helping participants explore and address the potential personal bias that could impact the administering of the judicial system.

“We are making a difference together in the lives of the people we serve,” stated High Commissioner of Canada to Barbados and the Eastern Caribbean Marie Legault, in her remarks.

Speaking further to Loop, Legault cited the strong commitment of the Canadian Government in supporting the improvement of regional court governance and administration. She noted the JURIST Project received close to CDN$20 million in funding and was a collaborative initiative with judiciary stakeholders, including the Caribbean Court of Justice (CCJ), across the region to tackle varied areas for judicial reform and enhancements.

JURIST Project Director Gloria Richards-Johnson indicated that the ongoing training provided a forum for the exchange of information, challenges and solutions. She noted it was a key ingredient to judicial reform efforts throughout the region, along with policy formation. The aim was to provide for more equitable judiciary systems that efficiently responded to the needs of community members, including women, girls and marginalized groups.

Ramsumair-Hinds, another trainer, pointed out the appropriateness of the JURIST Project training session being held during the “16 Days of Activism Against Gender-Based Violence”, an annual international campaign initiative supported by UN Women and UN Women Caribbean that pushes for the end of violence against women and girls. She cited the importance of ensuring “equal access to justice” for those persons who might face barriers against justice.

Acting Chief Justice William J. Chandler, who attended the closing ceremony on behalf of Barbados’ Chief Justice Sir Marston Gibson, expressed gratitude to the Canadian Government for its financial support of the program, and praised the training presenters for their stellar efforts in sharing their expertise with participants.

Behaviour before magistrate gets woman sent to Psychiatric Hospital