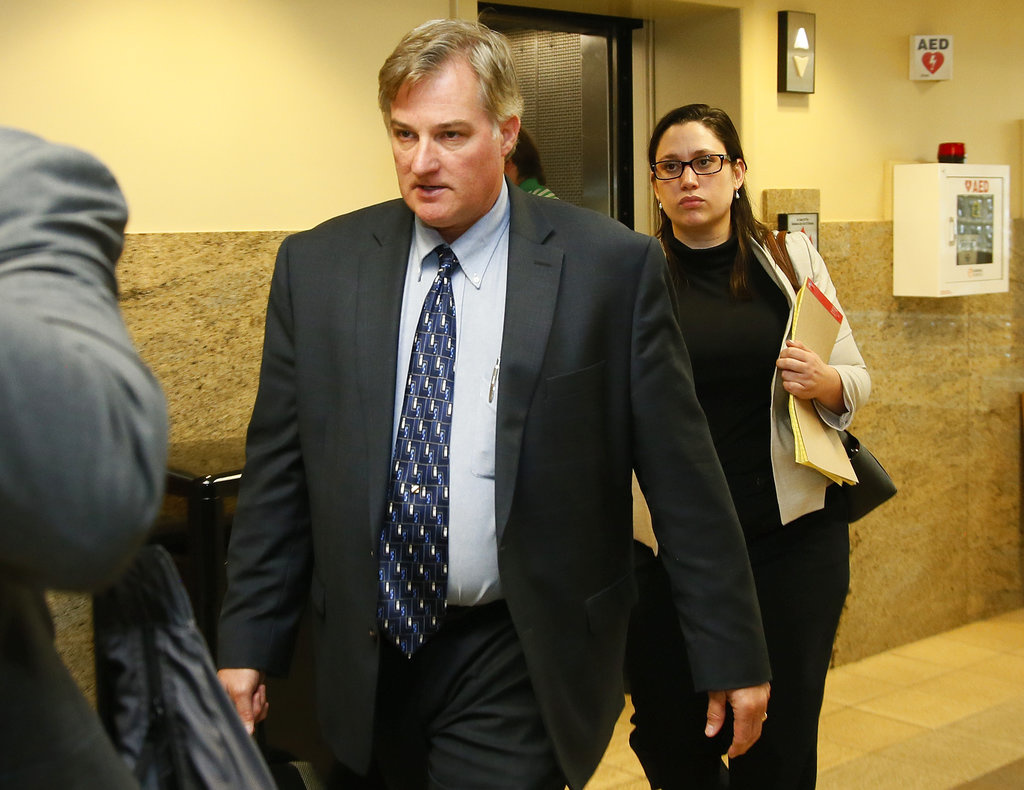 In this June 30, 2017 file photo, ex-Tulsa police officer Shannon Kepler, left, arrives with his legal team for afternoon testimony in his third trial in Tulsa, Okla. Jurors in the fourth murder trial for Kepler, a white former Oklahoma police officer, heard a 911 call Tuesday, Oct. 17, 2017 where his daughter screams to dispatchers that her father had shot her 19-year-old black boyfriend. (AP Photo/Sue Ogrocki, File)

A white former Oklahoma police officer was convicted of first-degree manslaughter in the off-duty fatal shooting of his daughter's black boyfriend after jurors in three previous trials couldn't decide whether to find him guilty of murder.

The jury recommended a sentence of 15 years in prison. A sentencing hearing is scheduled for November 20.

Lake's death occurred four days before a white police officer fatally shot an unarmed black teenager in the St. Louis suburb of Ferguson on Aug. 9, 2014. Brown's killing touched off months of protests and became a catalyst for the Black Lives Matter movement, which decries police violence against minorities and calls for greater transparency from law enforcement officials, especially in cases of officer-involved shootings.

The issue of race had also become an undercurrent in each of Kepler's previous three trials, with only one African-American being selected for each jury and accusations by civil rights activists that Kepler's attorneys were purposely trying to exclude potential black candidates.

Another racial element had been recently added to the case when Kepler argued that he couldn't be tried by state prosecutors because he's a member of an American Indian tribe. A judge determined the fourth trial in less than a year could move forward in state court. Kepler says he's 1/128th Muscogee (Creek).

Kepler's attorneys said the 24-year-police veteran was trying to protect Lisa Kepler because she had run away from home and was living in a crime-ridden neighborhood. Defense attorney Richard O'Carroll said Lisa had been in and out of a homeless shelter after her father forbade her from bringing men home into the house.

Kepler told investigators Lake was armed and that he was acting in self-defense, but police didn't find a weapon on Lake or at the scene.

"He's bringing it, I'm bringing it," Kepler said from the witness stand. "It was either him or me. I'm not going to stand there and get shot."

Kepler retired from the force after he was charged.

Prosecutors said Kepler first watched his daughter and Lake from his SUV before approaching them on the street. Lake's aunt disputed Kepler's self-defense account and has said her nephew was reaching out to shake Kepler's hand to introduce himself when Kepler fired.

Jurors in the previous three trials had deadlocked 11-1, 10-2 and 6-6, forcing the judge to declare mistrials. Although they couldn't agree on the murder charge, jurors in the first trial convicted Kepler of recklessly using his firearm.

State of Missouri lands at center of racial conflict again

White man arrested in slayings of 2 black men in Louisiana