Kamala Harris struggles to turn interest into momentum in Iowa 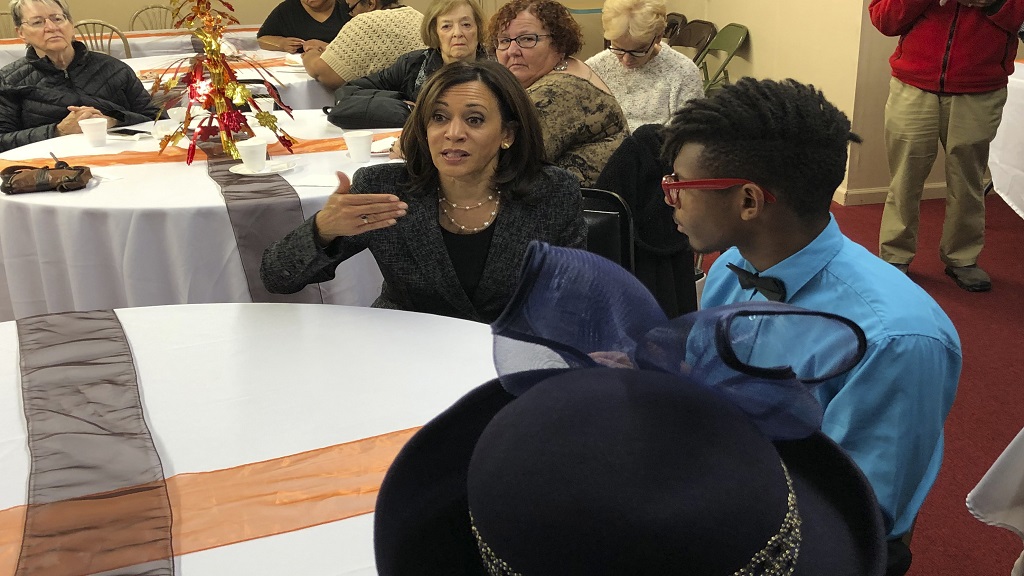 As he watched Kamala Harris speak recently at a historic hotel in northern Iowa, Jim Davis told the California senator she reminded him of Jimmy Carter, the little-known Georgia governor whose success in the 1976 caucuses helped vault him to the White House.

But he was not ready to commit. Joe Biden, Pete Buttigieg and Amy Klobuchar also have his attention.

This is Harris’ challenge as she reorients her once-promising campaign almost exclusively around Iowa, which holds the first caucuses on Feb. 3. The people who come to see her may walk away impressed, but it’s not translating into a groundswell of support.

Despite her almost singular focus on Iowa, a recent Monmouth poll said just three per cent of likely caucus-goers are backing her. That’s down from 12 per cent in August. Other polls also show her falling to the bottom of the Democratic field in Iowa and nationally over the past several months.

Her aides say a top-three finish in Iowa is necessary to keep her bid alive, and they project confidence she can again rise to the top, noting polling shows only about a third of Iowans are committed to a candidate.

“Our message is resonating in Iowa,” Harris told reporters after speaking to about 100 people in a small-town brewery last Sunday. “We’re going to continue putting our resources into signing people up and harnessing that enthusiasm.”

But initial interest in her candidacy has waned compared with the 20,000 people who showed up at her February campaign launch, albeit in California. Her once-large crowds in Iowa have dwindled to several hundred people as competitors like Buttigieg easily pull more, though local Democrats say she’s attracting a respectable amount of attention. 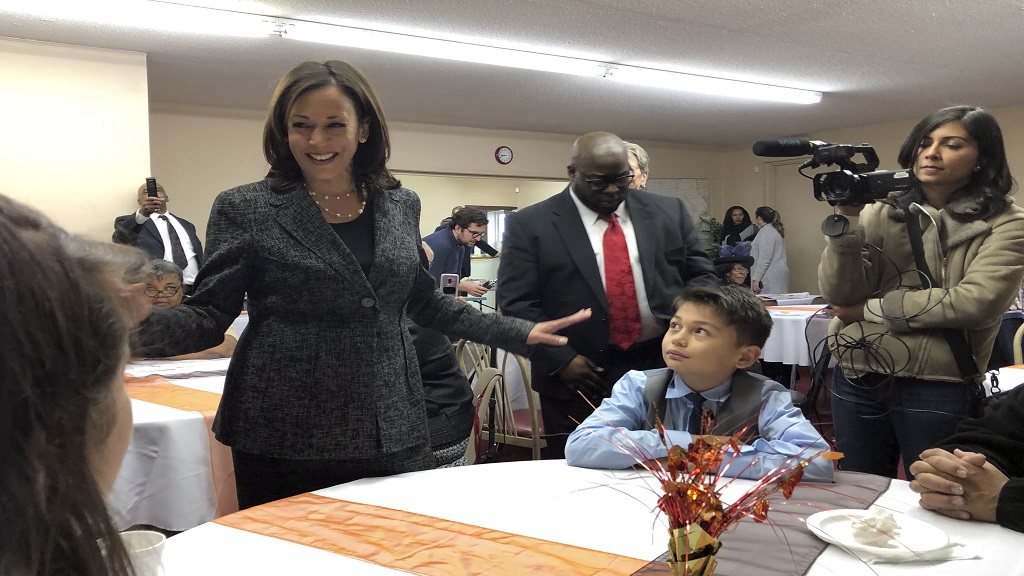 Sue Dvorsky, a former Iowa Democratic Party chairwoman and Harris backer, acknowledged Harris’s poll numbers are “not what any campaign would want them to be,” but downplayed their importance.

“There are simply too many things happening to look at the polling numbers and say you know, hands in the air, we’re done,” she said. “She is specifically not the kind of candidate who is going to crack under the pressure of the polls because she never has.”

Harris has largely abandoned talk of the "3 a.m." agenda that dominated her summer messaging in favor of the slogan that "justice is on the ballot." It's a return to the roots that Harris is most comfortable with — her background as a prosecutor — even as they’ve given pause to slices of the Democratic electorate.

Harris is also leaning into her identity as the daughter of a Jamaican father and Indian mother, saying she’s often heard she’s not “electable.”

“Iowa’s nature is to know what is possible and to make it happen,” she told the hotel crowd in Mason City, Iowa, last weekend, conjuring nostalgia for Barack Obama’s 2008 caucus victory.

Harris spent 15 days here in October, more than the past three months combined, and has multiple trips planned for November, including over Thanksgiving.

Earlier this month, her campaign announced staff at its Baltimore headquarters would be fired to save money for a $1 million-plus ad buy in Iowa in the weeks before the caucuses. The campaign also moved staff from other early voting states to Iowa.

Some of that movement has started, and the campaign expects to send about 20 more to Iowa on top of the 131 already there, spokesman Ian Sams said. 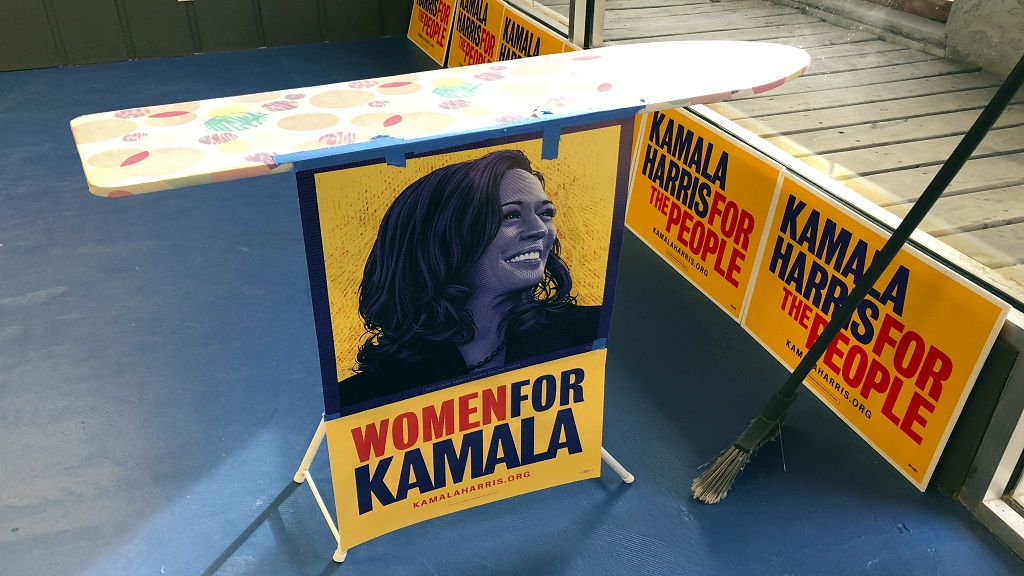 An ironing board decorates the front of a campaign office for Democratic presidential candidate Senator Kamala Harris, in Mason City, Iowa., on November 9, 2019. Harris often tells the story about setting up an ironing board outside grocery stores to meet voters during her first political campaign for San Francisco district attorney. (AP Photo/Kathleen Ronayne)

Organization is paramount to successfully compete in the Iowa caucuses. Voters will gather at 1,600 precincts on caucus night, and a candidate needs to have support from at least 15% of those who show up to earn delegates.

In the week following a major Iowa Democratic dinner this month where Harris received high marks, the campaign signed up 136 “precinct captains” who will serve as leaders on caucus night, Harris spokeswoman Miryam Lipper said. She declined to say how many captains the campaign has in total.

The campaign is focused on voters of color — a small fraction of the Iowa electorate — and “blue wave” women inspired to become active in politics following Donald Trump’s election, Lipper said. Harris gets strong applause when she mentions her questioning of Supreme Court nominee Brett Kavanaugh, a moment that went viral last year.

Her most recent visit sparked renewed interest from Amy Travis and Julie Geopfert, chairwoman of the Webster County Democrats. Both saw Harris at a teacher round table in August and were unimpressed; the room was hot, and the event started late.

Now both women say she’s now in their top tier of candidates.

“Big Wall Street doesn’t matter to Iowa,” Travis said, referencing messaging from Elizabeth Warren and Bernie Sanders. “At the end of the day, we want to know that our kids are going to be safe, and they’re going to be cared for and we’re going to have the health care and the mental health care. ... I think those talking points are going to really resonate with people.”

Harris’ struggles in Iowa underscore how long it’s been since she’s had to wage a retail-style form of campaigning. Her most recent elections in California were statewide, requiring her to rely on television for most of her outreach. She hasn’t had to hit the streets with such intensity since her 2003 run for San Francisco district attorney.

She often talks about how she approached that race, setting up an ironing board as a make-shift table outside grocery stores to meet voters. Some observers say Harris is trying to recreate that energy.

“In the biggest campaign of her life, she’s essentially relying on a lot of the same tactics that got her started in the first place,” said Brian Brokaw, who ran Harris’s 2010 campaign for attorney general.

The focus on winning support one voter at a time was in display recently at a Des Moines-area campaign office where 26-year-old Dani Marx worked the phones. On her call list was a 42-year-old trucker who had previously considered supporting Harris.

But when Marx called to check in, he shared fresh interest in Elizabeth Warren after talking with his friends about her health care plan. For nearly 10 minutes, Marx listened intently and tried to persuade him back to Harris.

He wasn’t convinced, but Marx wasn’t done. She invited him to meet for coffee, promising to bring details on Harris’s plans for teacher pay and criminal justice reform.

And she told him to bring his friends.

White House and Democrats fight over rules for impeachment