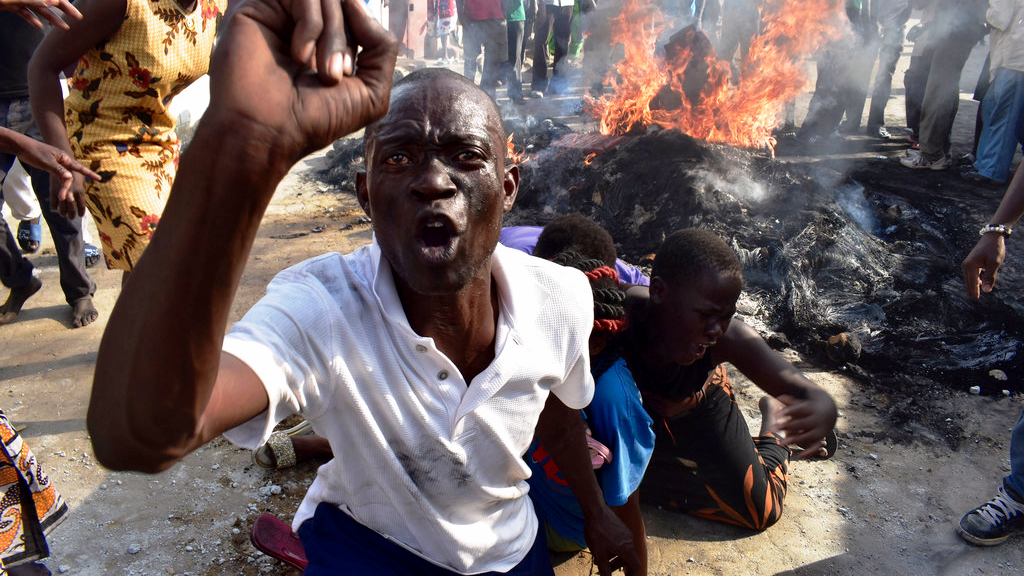 A opposition supporter reacts after burning tyres during demonstrations in Mombasa, Kenya, Thursday, Oct. 26, 2017. Kenya is holding the rerun of its disputed presidential election Thursday, despite a boycott by the main opposition party and rising political tensions in the East African country. (AP Photo)

Kenyan police on Thursday fired bullets and tear gas at stone-throwing protesters in some opposition areas during the repeat of the disputed presidential election, reflecting bitter divisions in a country whose main opposition leader urged followers to boycott the vote.

Three people were killed in protests, a police source said: one in the opposition stronghold of Kisumu County, another in Homa Bay in the west and the third in Athi River town outside the capital, Nairobi. The police source spoke on condition of anonymity because they were not authorized to speak to reporters.

Not a single ballot box was delivered to central Kisumu's 190 polling stations, said a senior election official, John Ngutai Muyekho. He sat with the uncollected boxes in a school guarded by security forces.

"If anyone comes to collect, I'm ready. But so far no one has," Muyekho said.

One Kisumu school that saw huge lines of voters in the Aug. 8 election was closed, its gates locked.

Voting proceeded in areas where President Uhuru Kenyatta has support, but fewer voters were turning out in comparison to the August election that the Supreme Court nullified because it found illegalities and irregularities in the election process.

Kenyatta said 90 percent of the country was calm and said Kenya must remove ethnic loyalties from its politics in order to succeed. The president, who was declared the winner in August with 54 percent of the vote, had said security forces would be deployed nationwide to ensure order on Thursday, and he urged Kenyans to vote while respecting the rights of those who didn't.

Voters lined up before dawn at a polling station in Kenyatta's hometown of Gatundu and electoral workers prepared ballot papers by flashlight after heavy rains knocked out power to the site.

"Our hope for the country is that whoever emerges the winner will be able to unite the country, which is already torn apart by politicians and politics of the day," said Simon Wambirio, a Gatundu resident.

Opposition leader Raila Odinga, who got nearly 45 percent of the vote in August, has said the new election won't be credible because of a lack of electoral reform and accused Kenyatta of moving a country known for relative stability and openness toward authoritarian rule.

Odinga's call for a boycott resonated strongly in Kisumu, Kenya's third-largest city. He has urged followers to stay away from polling stations because of concerns about a crackdown by security forces. Human rights groups said police killed at least 67 people during protests after the August vote; authorities confirmed a smaller number of deaths and said they had to take action against rioters.

Odinga has said the opposition coalition, National Super Alliance, will become a resistance movement. On Thursday, he said the movement will constitute a "People's Assembly to guide the country to a fresh free and fair presidential election" as part of a peaceful resistance that will include boycotting goods and services by those who have supported Kenyatta's "lawless grab of the presidency."

Odinga and Kenyatta, who seeks a second term, also faced off in a 2013 election similarly marred by opposition allegations of vote-rigging. The opposition leader also ran unsuccessfully in 2007 — ethnic-fueled animosity after that vote killed more than 1,000 people and forced 600,000 from their homes.

Many observers say Kenya's ethnic-based politics overshadow the promise of its democracy. Kenyatta is a Kikuyu, while Odinga is a Luo.

New screenings to start for all US-bound airline passengers

Woman sues after doctors unnecessarily removed her breasts and uterus