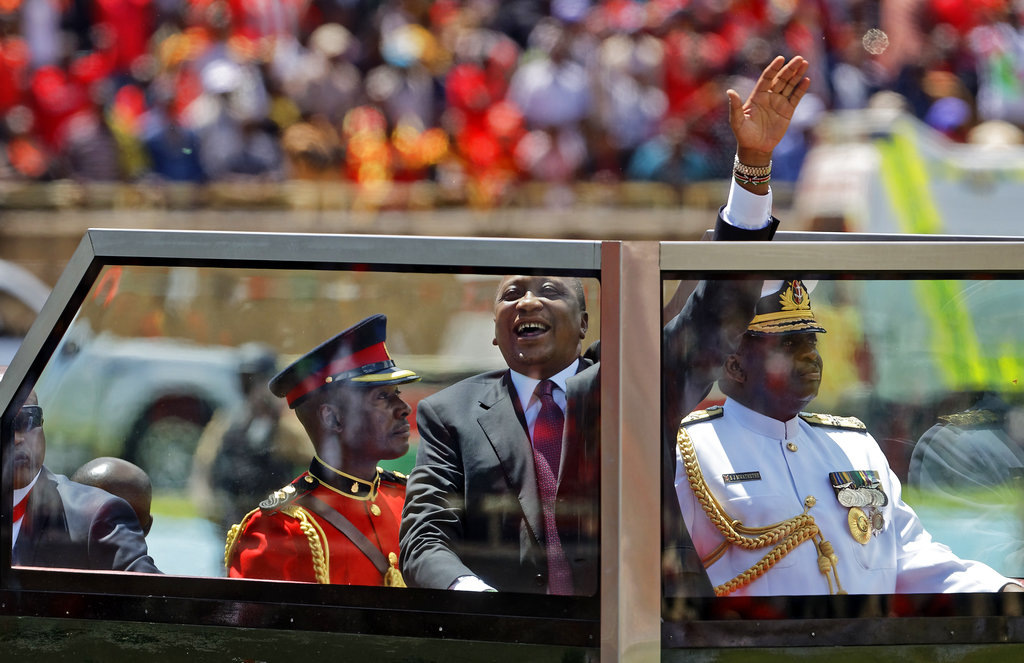 Kenyan President Uhuru Kenyatta waves from behind bulletproof glass as he arrives for his inauguration ceremony at Kasarani stadium in Nairobi, Kenya. (AP Photo/Ben Curtis)

Kenyan President Uhuru Kenyatta was sworn in for a second term Tuesday in front of tens of thousands who gathered to celebrate what they hoped would be the end of months of election turmoil, which Kenyatta said stretched the country "almost to the breaking point."

During the ceremony, police fired guns and tear gas in other parts of the capital, Nairobi, as officers tried to stop the opposition from holding peaceful demonstrations to mourn dozens killed by police and militia since August. A witness said one person was shot dead.

Kenyatta said the past few months "have been a trying time." He again criticized the Supreme Court's nullification of his August election win, saying that "despite ... being told that the processes matter more than your vote, we complied."

But he added that the court, whose justices he once called "crooks" for their ruling, acted with independence, and he said the recent events show that "our constitution is no piece of paper." Institutions should not be destroyed whenever they don't deliver the desired results, he added.

Kenya's election drama meant months of uncertainty in East Africa's economic hub. The court in nullifying the August result cited irregularities after a legal challenge by opposition leader Raila Odinga, and it ordered a new vote.

It was the first time in Africa that a court had nullified a presidential election, and Kenya's events have been closely watched cross the continent by opposition parties and leaders alike.

Odinga and his supporters boycotted the repeat election last month, saying electoral reforms had not been made. Many opposition supporters on Tuesday were heeding Odinga's call to gather and remember those killed in the months of turmoil.

Odinga has called Kenyatta's inauguration a "coronation" instead.

Kenyatta said his inauguration "marks the end, and I repeat the end, of our electoral process." He praised the resilience of Kenyans during the months of unrest.

Several regional heads of state attended the inauguration amid tight security as the country attempted to move forward, even as questions about electoral reforms lingered.

Kenyatta was sworn in using a Bible that had been used to swear in his father, founding President Jomo Kenyatta, at independence in 1963.