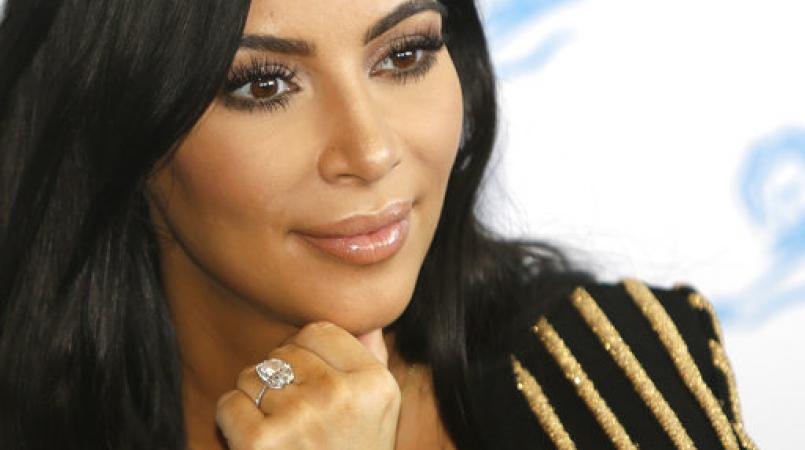 Kim Kardashian West takes her status as a role model seriously, and says part of that is owning up to her past mistakes and not letting online hatred distract her from her goals.

The reality show star spoke to The Associated Press on Tuesday before taking the stage as one of the keynote speakers at the annual Forbes Women's Summit. Her wide-ranging conversations touched on how hurtful comments affect her, her still-growing brand, how the robbery in Paris has changed her life and husband Kanye West's photographic ability, or lack thereof.

Kardashian West told the AP she is aware of her detractors, but said she has a bigger message of positivity to share.

"I obviously have made my fair share of mistakes like everyone else, but I hope to never repeat those mistakes, and just learn from what I've done," she said. "So if people, or young girls, or kids can look up to just someone that works really hard, and focuses on really what I want, and makes that happen, then you know I hope that inspires them."

Earlier in the day, Kardashian West added to that brand as she announced the launch of her beauty line KKW. Forbes just released its 2017 list ranking the world's highest-paid celebrities, and Kardashian came in at number 47 with $45.5 million.

Kardashian West has a combined 180 million followers on Instagram, Twitter, and Facebook, and has mastered each platform for maximum exposure for her overall brand, something she attributes to a simple rule.

"The most important thing is being authentic, and listening," she said.

With that many followers, Kardashian West said she knows there's going to be a certain level of negative comments, which of course bother her.

"Absolutely it affects me... there could be one or two negative comments that really do affect you, and get to you," she said. "You know I'm human just like everyone else. Like things do hurt my feelings, but I think that I do have a really thick skin."

She is more concerned that people, young and old, are victims of the same online bullying tactics.

"They have this keyboard courage that no one will see them and they will just write whatever and hurt your feelings," she said. "I know I can handle it, but I just fear for — I do see why young kids and people and teenagers, even get ... so hurt and bothered. That is what really bothers me."

In some instances, Kardashian West has turned the online hatred into fuel for her posts. She responded to backlash of her appearing on the cover of Forbes magazine last year with a self-deprecating tweet.

"We've built this brand, and I'm so proud of it," she said. "For everyone saying I have no talent, you know, I think I wrote, 'Not bad for a girl with no talent.'"

She credited her father, Robert Kardashian, with building bonds that allows her to draw strength from her family to deal with online negativity.

"We've always been a close family, but I think with everything that we go through, I think it brings us closer and closer," she said. "We're the only ones that really understand what it's like. You can report about it, you can talk about, but no one has really been through it, unless you are going through it with us. And luckily, we have each other. I don't know where most of us would be if we didn't have each other to vent to, to lean on, so I think we've been really blessed with a big family that all have the same core values."

"Keeping Up With the Kardashians" has exposed the private side of family struggles into the public forum, including her former brother-in-law Lamar Odom's addiction struggles, her brother Rob's issues with weight and depression, and sister Kourtney's tenuous relationship with Scott Disick. Then there's family tension after revelations in Caitlyn Jenner's book, where Kim came to her mother Kris Jenner's defense.

No struggle has shaken Kardashian West more than last year's Paris robbery where she was held at gunpoint. Thieves got away with more than $10 million dollars in jewelry after learning of her moves on social media. She admits that experience changed her life. Now she doesn't post pictures until she's returned from the event.

She joked with Forbes Media CEO Steve Forbes during his onstage interview that she tried to enlist West to help take photos of their recent trip to Japan to share online.

"It was such a mess," she said. "He was just not the best photographer."

Kim Kardashian is ''so excited'' to get rid of stretch marks