The overflow of sewage along Hastings Main Road in Christ Church has taken another victim, this time the Lantern's Mall.

Over the last few weeks, measures put in place by the Barbados Water Authority (BWA) had seen a drastic decrease in the overflow of sewage from the manhole immediately opposite the Mall and along the South Coast road. But as of this week, the situation has started to deteriorate once again.

The sewage overflows were so bad it forced convenience store, iMart to close their doors in the middle of the business day this Sunday.

Supervisor on duty at iMart, Adrian, explained the decision was made on Sunday to close the store around 4pm, six hours before the scheduled closing time, as the manhole in the carpark of the mall was spilling sewage. He was not able to put a figure on the financial loses the store would have incurred on that day. He said since then the BWA had done work on the manhole and the overflows in the carpark of the mall had settled. 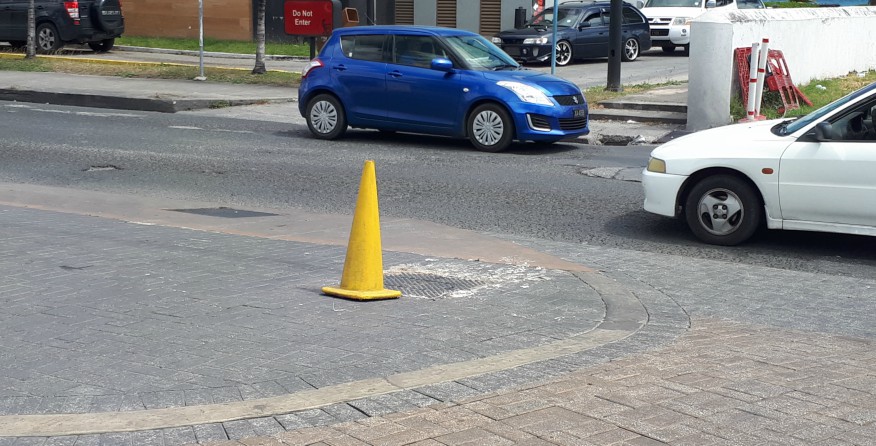 The lack of foot traffic in the mall was indicative of the growing seriousness of the sewage problem as the food court was virtually empty during the lunchtime rush hour traffic.

Employees of the BWA, were busy addressing the overflows on the other manholes along the south coast road.

During a Barbados Hotel and Tourism Association (BHTA) Quarterly Meeting earlier this month, General Manager of the BWA, Keithroy Halliday said they were in the process of rolling out short term measures to get control the sewage overflows. This included sealing the manholes along the Hasting Main road as well as using two ten-inch pumps to handle the millions of gallons of sewage coming into the system on a daily basis.