The Latest: 2 dead after van is swept away in S. Carolina 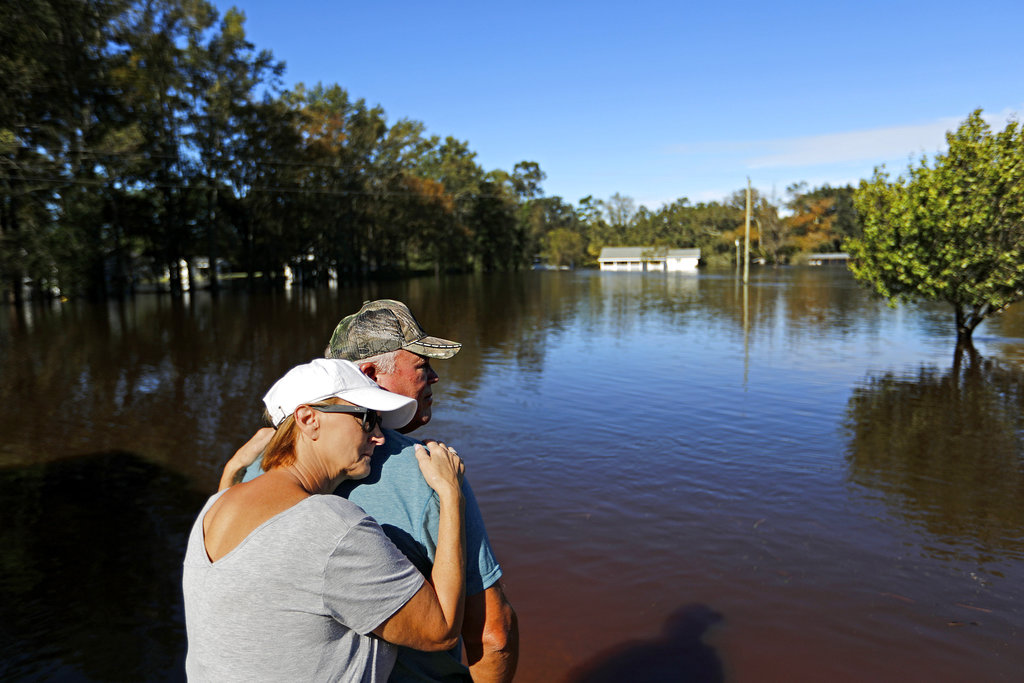 Dianna Wood, embraces her husband Lynn, as they look out over their flooded property as the Little River continues to rise in the aftermath of Hurricane Florence in Linden, N.C., Tuesday, Sept. 18, 2018. "I'm still hopeful," said Lynn about his home which currently has water up to the front step. "In another foot, I'll be heartbroken," he added. (AP Photo/David Goldman)

The Latest on Florence's lingering impact (all times local):

Authorities confirm two detainees drowned when a van was swept away in rising flood waters in South Carolina.

Horry County Sheriff's Department spokeswoman Brooke Holden says a sheriff's office van was carrying two detainees and two deputies from Conway to Darlington on Tuesday night when it was overtaken by flood waters. Officials say the van was traveling near the Little Pee Dee River, one of the bodies of water officials in South Carolina are watching closely as water continues to poor into the state from upriver in North Carolina following the heavy rains of Florence.

Marion County Coroner Jerry Richardson confirmed to AP earlier Tuesday that two women died in the incident. Their names have not been released.

Holden says the deputies tried to get the detainees out but couldn't open the doors. High-water rescue teams plucked the deputies from the top of the van.

The incident is being investigated by the State Law Enforcement Division.

Forecasters predict some rivers in the northeastern area of the state might not reach their highest levels until later this week or next week.

North Carolina's governor is pleading with thousands of Hurricane Florence evacuees to be patient and not return home just yet.

Wilmington is still mostly an island surrounded by floodwaters, and people are waiting for hours for handouts of necessities like food.

Gov. Roy Cooper told a news conference Tuesday is was hard for residents to leave home, and it's even harder for them to wait to go back. But Cooper says many roads are dangerous and new hazards are possible as floodwaters fall.

Officials say about 10,000 people are in shelters, and a new one is opening in one hard-hit county.

Aides say President Donald Trump will visit North Carolina on Wednesday to see the damage. He's already tweeted that any criticism of the government response is a "total lie."