The Latest: 5 children among 7 dead in Florida highway crash 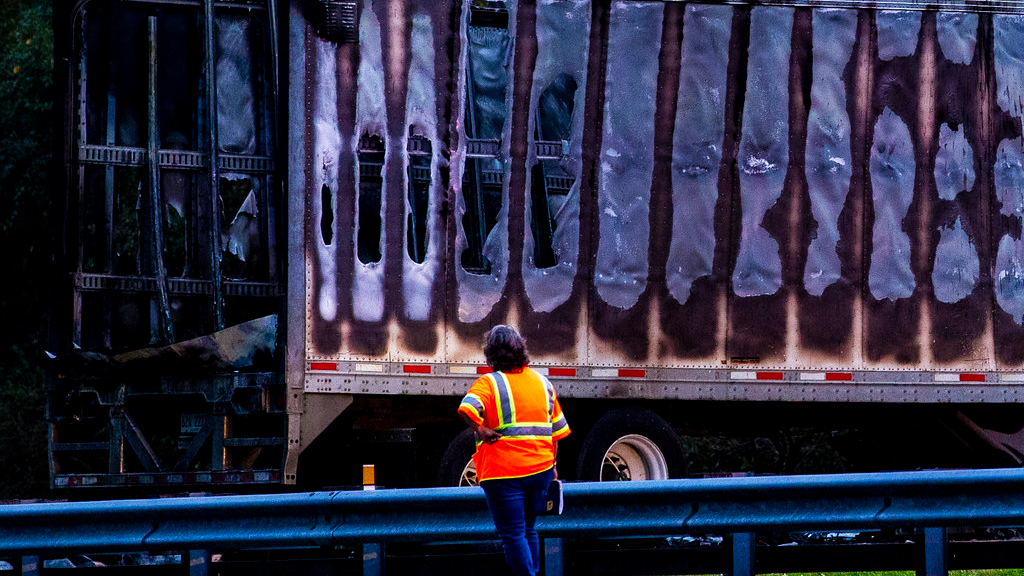 A worker looks at a charred semi-truck after a wreck with multiple fatalities on Interstate 75, south of Alachua, near Gainesville, Fa., Thursday, Jan. 3, 2019.

The Latest on a fatal highway crash in Florida (all times local):

The Florida Highway Patrol says five children from Louisiana and two tractor-trailer truck drivers died in a fiery crash on a Florida interstate.

During a news conference on Friday morning, Lt. Patrick Riordan said the church passenger van carrying the children was from the Avoyelles Parish in Louisiana. The crash happened at 3:40 p.m. Thursday just south of Gainesville in north Florida.

Riordan says a tractor-trailer and a passenger vehicle traveling north, collided and went through the guardrail into the southbound lanes. They struck the passenger van and another tractor trailer. He says when the trucks collided they caught fire.

Riordan says next of kin notifications are still underway.

The northbound lanes of the interstate reopened on Friday and one southbound lane is now open.

A traffic homicide investigation continues into what caused the crash.

The Florida Highway Patrol says all northbound lanes of Interstate 75 in Florida are open the morning after a fiery crash that killed seven people and injured at least eight others.

Motorists should expect delays on Friday as only one southbound lane is open south of Gainesville, where the crash happened Thursday afternoon.

The highway patrol has scheduled a 10 a.m. news conference to discuss the investigation into the crash.

Sgt. Steve Gaskins said the investigation is classified as a traffic homicide, which is routine in nature.

Authorities say another person has died in a fatal crash on a Florida highway, bringing the death toll to seven.

The Gainesville Sun reports several others were taken to the hospital, some with critical injuries.

Emergency crews extinguished the fire and said they were treating the crash as a homicide investigation. Authorities have not why they are treating the deaths as potential homicides.

Authorities say their top priority is identifying the victims so they can notify their relatives.

The aftermath closed part of the highway in both directions for hours, causing massive delays.

Highway officials say six people have died after a crash and diesel fuel spill sparked a massive fire on a Florida interstate.

The Florida Highway Patrol says two tractor-trailer rigs and two passenger vehicles were involved in Thursday's wreck on Interstate 75 about a mile (1.6 kilometres) south of Alachua, near Gainesville. Authorities say the fire was ignited after about 50 gallons (189 litres) of diesel spilled onto the highway.

The fire has been extinguished. Eight others have been taken to the hospital. The Gainesville Sun reports some of the injuries were critical.

A helicopter landed to search for injured people who may have been in the woods along the crash scene.