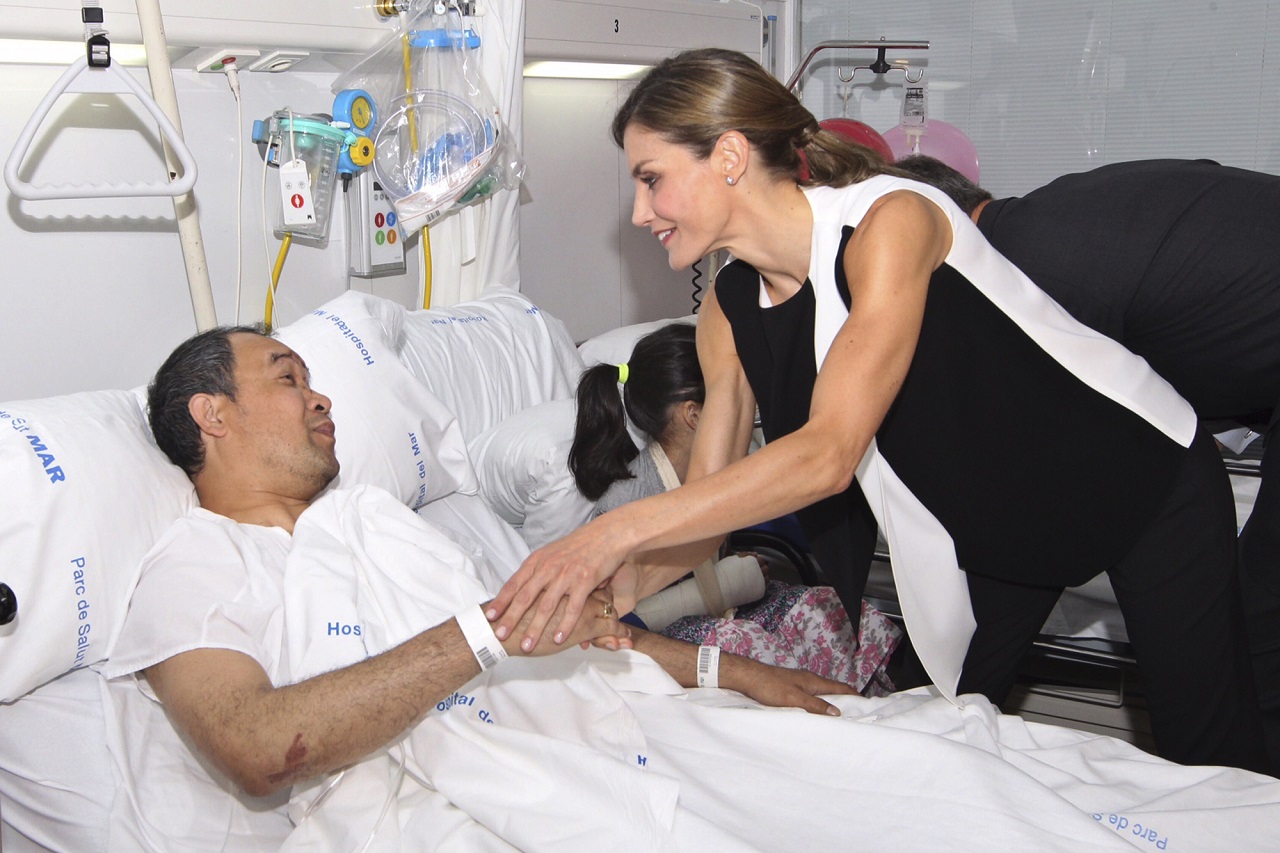 Spain's Princess Letizia speaks with one of the victims of the van attacks at a hospital in Barcelona , Spain, Saturday, Aug. 19, 2017.

The Latest on the Spain attacks (all times local):

Catalan emergency services say they have identified seven of the 14 people killed in the attacks in Barcelona and the nearby seaside town of Cambrils.

Of the 13 dead from the Barcelona attack, officials have identified four Spaniards, two Portuguese and one Italian. Family members or government officials also say an American man, another Italian man and a woman from Belgium were also killed there.

The one fatality from the attack in Cambrils was a Spanish woman.

The emergency service says Saturday that 54 people remained in the hospital, 12 of them in critical condition. They say 78 people have been released after being treated.

Excavation work is continuing at a house south of Barcelona where, according to Spanish police, members of an Islamic extremist cell plotted their attacks.

The deputy mayor of Alcanar, Jordi Bort, says police are trying to determine if any explosives were still in the house, and to secure them through controlled explosions.

The house was effectively destroyed on Wednesday during an accidental explosion. Authorities had initially dismissed the blast as a household gas accident, but now say it appears to be related to the plans for an even more deadly attack involving gas or explosives.

One person was killed during the Wednesday blast. Bort says police are also looking to determine if human remains found at the site belong to a second victim. Bort says so far positive identification hasn't been possible because DNA results haven't come in yet.

Muslims in the hometown of suspects arrested over last week's attacks in Spain have expressed their condolences to the victims.

In a note posted Saturday on the door of the mosque in Ripoll, a quiet, upscale town of 10,000 about 100 kilometers (60 miles) north of Barcelona, the community said it condemned the attack.

It said "The Annour Islamic Community of Ripoll expresses its strongest condemnation and rejection of the terrorist attack committed on Thursday in Barcelona.

"Catalan Muslims express their sympathy for the families of the victims, wishing for the complete recovery of the injured, and offering their solidarity with the people of Barcelona, Catalonia and Spain.

"Faced with this criminal act, the Annour Islamic Community of Ripoll reiterates its complete commitment to the fight against any form of terrorism, and we hope that those responsible for this attack are arrested and taken before a judge as soon as possible."

Spain's king and queen have visited the victims of the van attack in Barcelona who are recovering in local hospitals.

The royal couple visited one family in which two children and their father were recovering from wounds received when a van plowed down the city's main pedestrian promenade, killing 13 people and injuring 120 on Thursday.

A separate car attack a few hours later in the nearby coastal town of Cambrils killed one person and injured five early Friday.

Catalonia's emergency services say by Saturday, 54 people remained in the hospital, with 12 of them in critical condition, from both attacks.

Catalan police are confirming that the manhunt underway for any remaining members of the Islamic extremist cell is focusing on Younes Abouyaaquoub, a 22-year-old Moroccan.

Police spokesman Albert Oliva says police have carried out nine searches of apartments in Ripoll, the northern Catalan town where Abouyaaquoub and other suspects lived.

Oliva said Saturday: "We can confirm that the manhunt is on for the person" identified in the media. Spanish media have named Abouyaaquoub as the presumed ringleader of the cell and driver of the van that plowed into pedestrians in Barcelona.

Spanish Interior Minister Juan Ignacio Zoido has declared that the cell was effectively broken after five members were killed, four were in detention and as many as two were killed in a previous explosion. That leaves only one remaining member: Abouyaaquoub.

Italy's foreign ministry is confirming a third Italian was killed in the dual attacks in Spain.

The ministry said in a statement Saturday that Carmen Lopardo, 80, was killed in the "vile terrorist attack in Barcelona."

News reports said Lopardo had immigrated to Argentina in 1950 and was visiting Barcelona.

A small group of Muslims have gathered at Barcelona's Las Ramblas promenade to insist they aren't terrorists in the wake of the twin vehicle attacks that killed 14 people and injured dozens.

The protest by about 100 members of Barcelona's Muslim community was held at the Canaletas Fountain at the top of the promenade.

They shouted "We are not terrorists" and "Islam is peace."

Catalan's Moroccan community, in particular, has been in the spotlight after the four main suspects in the attacks claimed Moroccan roots.

Portugal's prime minister says a 20-year-old woman from Lisbon is among those killed in the Barcelona attacks.

The woman, whose 74-year-old grandmother was also killed in Thursday's attack on Las Ramblas, had initially been considered missing but Prime Minister Antonio Costa confirmed her death in a statement to reporters Saturday.

Portuguese media reported that the two were in Barcelona to celebrate the grandmother's birthday. Their names were not released.

The two Portuguese women are among 14 people killed in car attacks on Barcelona and the town of Cambrils, as part of what authorities call a terrorist plot claimed by the Islamic State group.

Spanish authorities have decided to maintain the country's terrorist threat rating at level 4, declaring that no new attacks were imminent.

French police are carrying out extra border checks on people arriving from Spain as authorities search for a fugitive suspect in the Barcelona attacks.

No arrests had been made by Saturday morning, according to a French security official, who described the checks along the normally open border as routine whenever neighboring countries signal a potential risk.

Another French security official said Spanish authorities flagged a Kangoo utility vehicle believed to have been rented in Spain by a suspect in Thursday's attacks and that may have crossed the nearby border into France.

Both officials were not authorized to be publicly named.

At multiple border posts in the winding roads crossing the western Pyrenees on Saturday, gendarmes stopped certain vehicles to check drivers' IDs and the contents of their cars. They targeted primarily vans, trucks and utility vehicles.

Catalan police say they are carrying out controlled explosions in the town where an extremist cell plotted the attacks in Barcelona and a seaside resort.

In a tweet Saturday, police urged residents of Alcanar not to be alarmed by the detonations in the town, where they believe the extremists rented a house used to prepare their attacks.

The house was destroyed by an apparently accidental explosion on Wednesday. Police believe the blast actually prevented a far more deadlier attack using explosives, forcing the extremists to use more "rudimentary" vehicles instead.

Representatives from the Spanish and Catalan government are meeting to determine the terrorist threat level for the country and its Catalan region, after Barcelona and the southern resort town of Cambrils were hit with terrorist attacks.

Following the Thursday afternoon and early Friday morning attacks that killed 14 people and wounded more than a hundred, Spain's threat level is now four on a scale that goes to five, a ranking that would warrant military deployments.

Authorities say the attacks were the work of a large terrorist cell that had been plotting for a long time from a house in Alcanar, 200 kilometers (124 miles) down the coast from Barcelona.

Senior police official Josep Lluis Trapero said that an apparently accidental butane gas explosion at the house, which killed one person, likely prevented the suspects from carrying out a far deadlier attack.

The Philippines government says a child missing after a vehicle plowed into pedestrians in Barcelona is the 7-year-old son of a Filipino woman who had been living in Australia.

The Philippines' Foreign Affairs Undersecretary for Migrant Workers Affairs Sarah Arriola said in a statement on Saturday that the 43-year-old Filipino woman was seriously injured in Thursday's attack. She had been based in Australia for the past three or four years.

Arriola says the woman and her son were in Barcelona to attend the wedding of a cousin from the Philippines.

Australia's prime minister has urged people to pray for the child.

Australian Prime Minister Malcolm Turnbull has asked people to pray for a young Australian boy who is missing after a vehicle attack on a popular Barcelona promenade that killed 13 people.

Turnbull said Saturday that the boy's mother was badly injured and is in a hospital following Friday's attack at the Las Ramblas promenade. Turnbull says the boy's family is searching for him. He did not release the boy's name.

Police in Catalonia say they have searched two buses in their hunt for violent extremists believed responsible for a pair of deadly attacks in the northwestern region of Spain.

Police say on their Twitter feed that they searched the buses in Girona and Garrigas, towns in the northwest of Catalonia, but the operation yielded nothing of importance. They provided no further information.

Authorities launched a manhunt for members of what they believe to be a Catalonia-based extremist group after 14 people were killed and more than 100 injured in attacks in Barcelona on Thursday and in Cambrils, south of Barcelona, on Friday.

Officials say at least one suspect is still at large.

Police say they have identified the five people, presumed to be the attackers, shot to death by police in the Cambrils incident but gave no details.

Four people have been arrested as part of the investigation.

Surveillance video from inside a Barcelona museum captured images of the van used in the fatal attack on pedestrians speeding down the Las Ramblas promenade where 13 people were killed and many more were wounded.

The video shows a person with a stroller just barely getting out of the white van's way and other people on the walkway scattering as it barreled down the walkway.

Museum goers who apparently either heard the van or people outside just after it went by are seen in the images gathering near the window and looking outside.

Authorities said the assailants after striking in Barcelona drove a second vehicle to the resort town of Cambrils and fatally injured one person early Friday morning.

The White House says Trump pledged to support Spanish authorities in their investigation and in bringing the perpetrators to justice.

Trump initially offered supportive words to Spain in a tweet Thursday after a van plowed through pedestrians in Barcelona. Thirteen people were killed. The State Department says at least one American was killed and one was injured in that attack.

One person was killed in a separate van attack in Cambrils, Spain