The Latest: Arsonists blamed for Spanish fires that killed 4 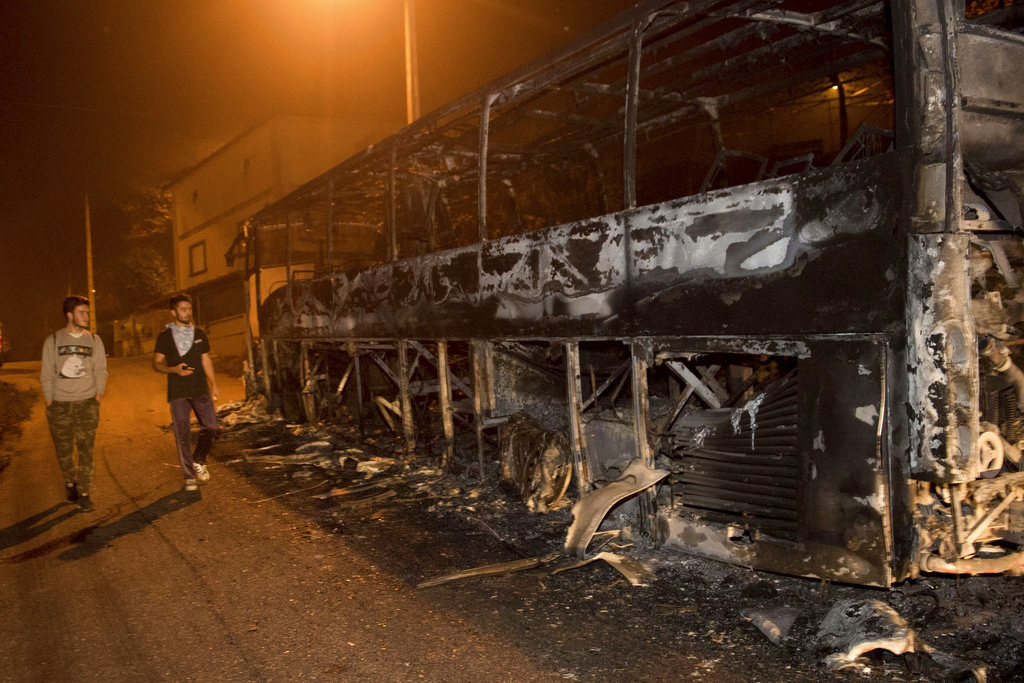 Residents walk past a burnt bus as a wild fire moves forward in Chandebrito, Pontevedra, in the northwestern Spanish region of Galicia, Spain on Monday, Oct. 16, 2017. Authorities in Portugal and Spain say that nine people died over the weekend in hundreds of wildfires fanned by strong winds caused by a hurricane. Three people, two of whom were trapped in a car, were killed as a result of more than 130 blazes reported in different areas, officials said. (AP Photo/Alba Sotelo)

The Latest on wildfires in Portugal and Spain (all times local):

A top Spanish official has blamed arsonists for causing most of the 105 fires now burning the northwestern Galicia region, leaving four people dead.

Regional president Alberto Nunez Feijoo said "Galicia is fed up" with being attacked by arsonists who make the most of weather conditions, adding that some purposely tried to cause most damage by targeting urban areas.

Feijoo says 15 of the fires are posing a risk to towns. He added that 90 percent of forest fires each year in Galicia are intentional.

He told reporters: "All of Galicia is weeping this morning for our razed hills, but especially for the loss of human lives."

Spanish Prime Minister Marian Rajoy, who is from Galicia, traveled to the region Monday.

Portugal's Civil Protection Agency says that apart from 27 deaths in a new spate of wildfires there are 51 injured and an unconfirmed number of missing.

Agency spokeswoman Patricia Gaspar tells a news conference that 15 of those hurt in Sunday's blazes are in serious condition.

Gaspar said Monday that police and other officials are trying to locate those reported missing. She said that the wildfire situation is still "critical" due to temperatures above 30 C (86 F), but cooler, wetter weather is approaching.

The deaths occurred in densely forested central and northern parts of Portugal.

Portugal's Civil Protection Agency says 27 people have died in a new spate of wildfires in the country.

Emergency services recorded more than 500 wildfires Sunday, the highest number of the year in a single day and the worst in more than 10 years.

Portugal has been especially hard hit by wildfires this year, including one that killed 64 people in June. A prolonged drought and mid-October temperatures of more than 30 C (86 F) have fueled the fires.

Rain was forecast to fall later Monday and bring some respite for firefighters.

Spain's prime minister says he's traveling to his native region of Galicia in the northwest where raging wildfires have killed at least three people and prompted the evacuation of thousands.

Mariano Rajoy tweeted: "I'm heading to Galicia. Solidarity of all Spain and prompt coordination to combat the fire and assist people."

In an earlier message, Rajoy had expressed condolences over the three fatalities, thanking workers and volunteers who are working to extinguish the fires.

Rajoy will be visiting an emergency coordination center in Vigo and supervising work in Pazo Bovan, one of the areas affected by the wildfires.

The fires grew over the weekend because of high temperatures and strong winds from Hurricane Ophelia in the Atlantic Ocean. Fires in neighboring Portugal have killed at least six people.

Authorities in Portugal and Spain say that nine people died over the weekend in hundreds of wildfires fanned by strong winds caused by a hurricane.

Civil Protection authorities in Portugal said that six people died and at least 25 were injured, most of them firefighters, during blazes raging in central and northern areas of the country.

Officials in the northwestern Spanish region of Galicia said that three people, two of whom were trapped in a car, were killed as a result of more than 130 blazes reported in different areas.

Authorities in Galicia said that the strong winds from Hurricane Ophelia and high temperatures fanned the fires, but investigators are also focusing on human causes. Light rainfall early Monday was expected to help extinguish the flames.