The Latest: Bank of England apologises for slave trade links 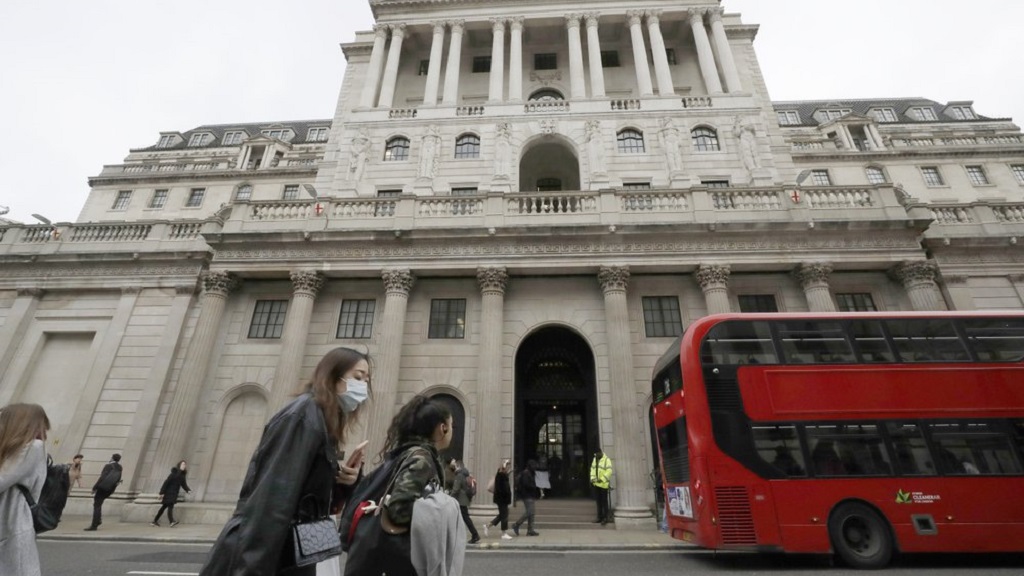 FILE - In this Wednesday, March 11, 2020 file photo, pedestrians wearing face masks pass the Bank of England in London. The Bank of England has apologized for the links past governors of the institution had with slavery. (AP Photo/Matt Dunham, file)

— Hundreds gather in Atlanta suburb as Confederate monument is taken down.

— Maryland police chief steps down amid reports of racial bias.

LONDON — The Bank of England has apologised for the links past governors of the institution had with slavery.

The central bank called the trade in human beings "an unacceptable part of English history," and pledged to not to display any images of former leaders who had any involvement.

The bank says in a statement Friday it is "aware of some inexcusable connections involving former governors and directors and apologizes for them.''

On Thursday, two British companies promised to financially support projects assisting minorities after being called out for past roles in the slave trade.

Insurance giant Lloyd's of London and the pub chain Greene King made the pledges after they were included in a University College London database of companies with ties to the slave trade.

DECATUR, Georgia — As midnight approached, hundreds gathered in an Atlanta suburb's town square and watched a crane swoop in and take down a 112-year-old Confederate monument.

The stone obelisk was removed from its perch in Decatur, Georgia, on the eve of Juneteenth amid jeers and chants of "Just drop it!"

The monument was among those around the country that became flashpoints for protests over police brutality and racial injustice in recent weeks, following the death of George Floyd at the hands of police in Minneapolis.

The monument to the Lost Cause that was erected by the United Daughters of the Confederacy was often vandalized and marked by graffiti.

The city of Decatur had asked a Georgia judge last week to order the removal of the monument, saying it had become a threat to public safety.

The DeKalb County judge ordered the 30-foot (9-meter) obelisk to be removed by June 26 and placed in storage indefinitely. His order was handed down just hours before 27-year-old Rayshard Brooks was shot and killed by an Atlanta police officer, renewing protests in the Georgia capital region.

UPPER MARLBORO, Maryland — A Maryland police chief is stepping down amid reports alleging racial bias and discrimination toward officers of colour.

Prince George's County police Chief Hank Stawinski resigned Thursday as the NAACP planned to hold a vote of no-confidence against his leadership. The resignation also comes after the American Civil Liberties Union detailed discriminatory practices and retaliation by the department in a 94-page report.

Thirteen black and Hispanic officers asked the ACLU to file a lawsuit on their behalf in 2018, accusing the department of allowing racist actions and punishing minority officers who reported the incidents. County Executive Angela Alsobrooks made the announcement. Stawinski didn't immediately respond to comment requests.

CLACKAMAS, Oregon — The mother of an African American boy filed a $300,000 lawsuit Thursday, saying three sheriff's deputies near Portland pinned him to the ground — one by pressing a knee on his neck — outside a suburban mall after the 12-year-old witnessed a fight and was walking away.

The incident happened last August, more than nine months before widespread national outrage over the killing of George Floyd after he was put in a similar hold by Minneapolis police.

The boy, Ka'Mar Benbo, is now 13 but was 12 at the time and the friends he was with repeatedly told Clackamas County deputies his age, the lawsuit said.

A spokesperson for the Clackamas County Sheriff's Office didn't respond to a request for comment Thursday from the Associated Press.

Chris Owen, spokesman for the Clackamas County District Attorney, said nothing had been submitted to prosecutors on the incident.

"If we get presented the necessary information, we will certainly evaluate it," he said.

Clackamas County is a suburban area southeast of Portland.