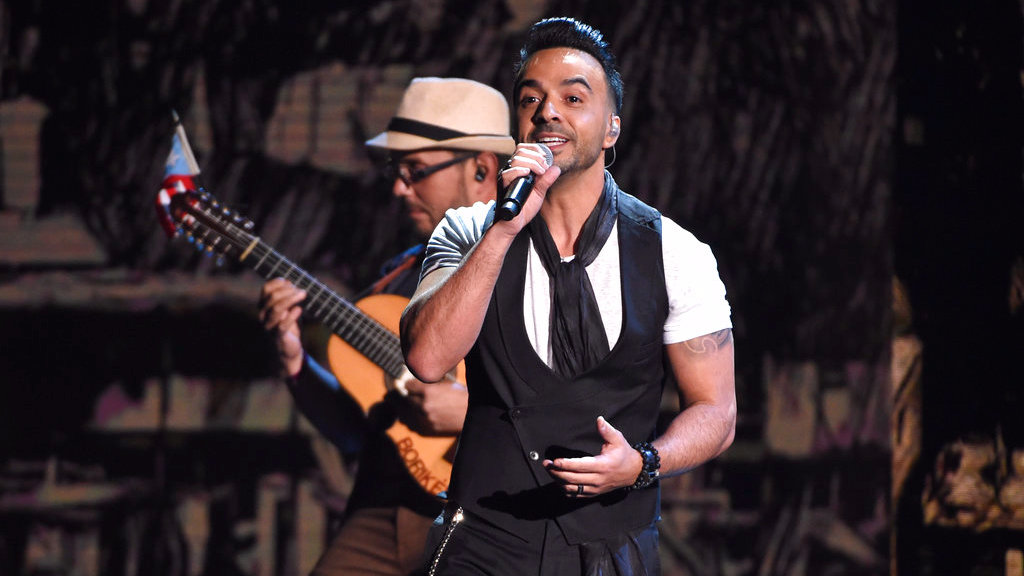 The Latest on the 18th Annual Latin Grammy Awards were presented Thursday at the MGM Grand Garden Arena in Las Vegas (all times local):

Luis Fonsi's megahit featuring Daddy Yankee was the biggest winner of the night Thursday, picking up four trophies. The song, whose video is the most watched on YouTube, was honored for record of the year, best short-form music video, best urban fusion/performance and song of the year.

Puerto Rican rapper Residente, who lead the nominations ahead of the ceremony in Las Vegas, took home trophies for best urban music album for his self-titled album and best urban song for "Somos anormales."

Meanwhile, Colombian megastar Juanes claimed the trophy for best pop/rock album, breaking the record of 21 awards that he shared with Calle 13.

The last award of the night went to "Salsa Big Band" of Ruben Blades with Roberto Delgado and orchestra.

Alejandro Sanz has dedicated his person of the year award at the Latin Grammys to the young immigrants living in the U.S. illegally, commonly referred to as "dreamers."

Sanz also dedicated the award to Puerto Rico, Mexico, Dominican Republic, Texas and Florida, all areas that were recently affected by natural disasters. He sang his hits "Corazon partio" and "No es lo mismo" with a group of "dreamers."

Sanz, who is celebrating two decades since the "Mas" album launched him to international stardom, was earned the award for his achievements in music and his philanthropic contributions to organizations such as Doctors Without Borders, Save the Children and Greenpeace.

Sanz told reporters backstage that laws sometimes "are written in law firms and people are not given consideration."

The 18th annual Latin Grammy Awards are being presented at the MGM Grand Garden Arena in Las Vegas.

Luis Fonsi's megahit "Despacito" featuring Daddy Yankee has won the record of the year award at this year's Latin Grammys.

The Latin Grammy Awards opened Thursday with a moment of silence for hurricane victims in Puerto Rico, followed by a performance by one of its native sons.

Wearing a T-shirt emblazoned with the Puerto Rican flag, rapper Residente kicked off this year's show with a performance of his song "Hijos del Canaveral," a tribute to his homeland.

Colombian megastar Juanes claimed the first prize awarded during the live show. He took home the trophy for best pop/rock album, breaking the record of 21 awards that he shared with Calle 13.

Residente leads the nominations with nine nods for his work post-Calle 13.

The megahit "Despacito," which highlights the color and beauty of a now-devastated San Juan, Puerto Rico neighborhood, has won the Latin Grammy for best short-form music video.

The video that has become the most watched music video ever on YouTube, with over 4.3 billion views. The award was handed out Thursday during a pre-telecast event in which the bulk of the awards were distributed.

Video director Carlos R. Perez says the success of the video and song in Spanish is a clear indication that "the Latino culture is becoming more and more of an influential part of not only the U.S. but globally."

The Luis Fonsi megahit earned four nominations this year: record and song of the year, as well as best urban fusion/performance for its remix with Justin Bieber and best short form music video for its clip.

The 18th annual Latin Grammy Awards will air live from the MGM Grand Garden Arena in Las Vegas at 8 p.m. EST on Univision. More than 15 performances are scheduled for the show.

Residente, Mon Laferte and the megahit "Despacito" have each earned trophies ahead of Thursday's 18th annual Latin Grammy Awards.

Residente takes home the trophy for the best urban music album during a pre-telecast event in which the bulk of the categories are awarded. He leads nominations with nine nods for his first solo album post-Calle 13.

The show will air live from the MGM Grand Garden Arena in Las Vegas at 8 p.m. EST on Univision. The Latin Recording Academy has promised performances by Alejandro Sanz, Maluma, Residente and more.

Laferte won the first Latin Grammy of her career in the category of best alternative song for "Amarrame."

"Despacito (Remix)," a version of the megahit of Luis Fonsi and Daddy Yankee featuring Justin Bieber won the award for best urban fusion/performance.

With his first solo album, Residente has everything to gain at this year's Latin Grammy Awards.

The Puerto Rican rapper leads the nominations ahead of the Thursday ceremony in Las Vegas with nine nods for his work post-Calle 13, including album, record and song of the year. Colombian sensation Maluma has the second most nominations this year with seven, while Shakira's comeback garnered six.

The largest celebration of Spanish-language music comes at a time when many Latinos are wondering if there's anything to celebrate this year as they've felt the effects of the Trump administration's immigration agenda and their communities were destroyed by natural disasters. The Latin Recording Academy has promised performances by Alejandro Sanz, Luis Fonsi, Maluma, Residente and more.

The show airs at 8 p.m. EST on Univision.