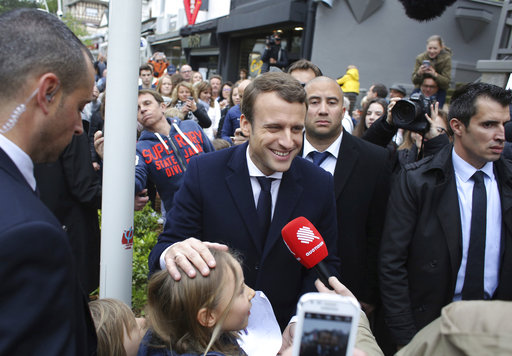 8:10 p.m.
France's prime minister says that centrist candidate Emmanuel Macron has won the French presidential election.
Bernard Cazeneuve said in a statement minutes after the last polls closed that the vote "testifies to the lucidity of the voters who rejected the deadly project of the extreme right." He said the vote shows an embrace of the European Union.
French polling agencies have projected that Macron has defeated Marine Le Pen 65 percent to 35 percent, with a record number of blank and spoiled ballots.
___
8 p.m.
Polling agencies have projected that centrist Emmanuel Macron will be France's next president, putting a 39-year-old political novice at the helm of one of the world's biggest economies and slowing a global populist wave.
The agencies projected that Macron defeated far-right leader Marine Le Pen 65 percent to 35 percent on Sunday.
If confirmed, Le Pen's showing would nonetheless be stronger than her National Front party has seen in its 45-year history.
The projections are based on vote counts in selected constituencies, then extrapolated nationwide.
Macron would be the youngest French president ever.
But Le Pen's projected showing, unusually low turnout and the record number of blank ballots are an indication of the headwinds facing Macron, a former economy minister who started his own political movement only a year ago.
___
6:40 p.m.
Supporters of French presidential candidate Emmanuel Macron are entering the courtyard outside the Louvre museum in Paris where he plans to celebrate election night.
Late Sunday afternoon, French police emptied the place of tourists. Police dogs searched the site.  Hundreds of Macron supporters were waiting quietly outside barriers to pass security checks, while Macron's volunteer staffers were handing them French tricolor flags.
Earlier in the day, the courtyard was briefly evacuated after a suspicious bag was discovered. The famous museum itself was not evacuated or closed.
Macron, a centrist, is running against far-right Marine Le Pen in the presidential runoff. If elected as France's next president, he plans to speak on the stage with the museum's large glass pyramid in the background.