The Latest: Jose re-strengthens to hurricane off coast of NC 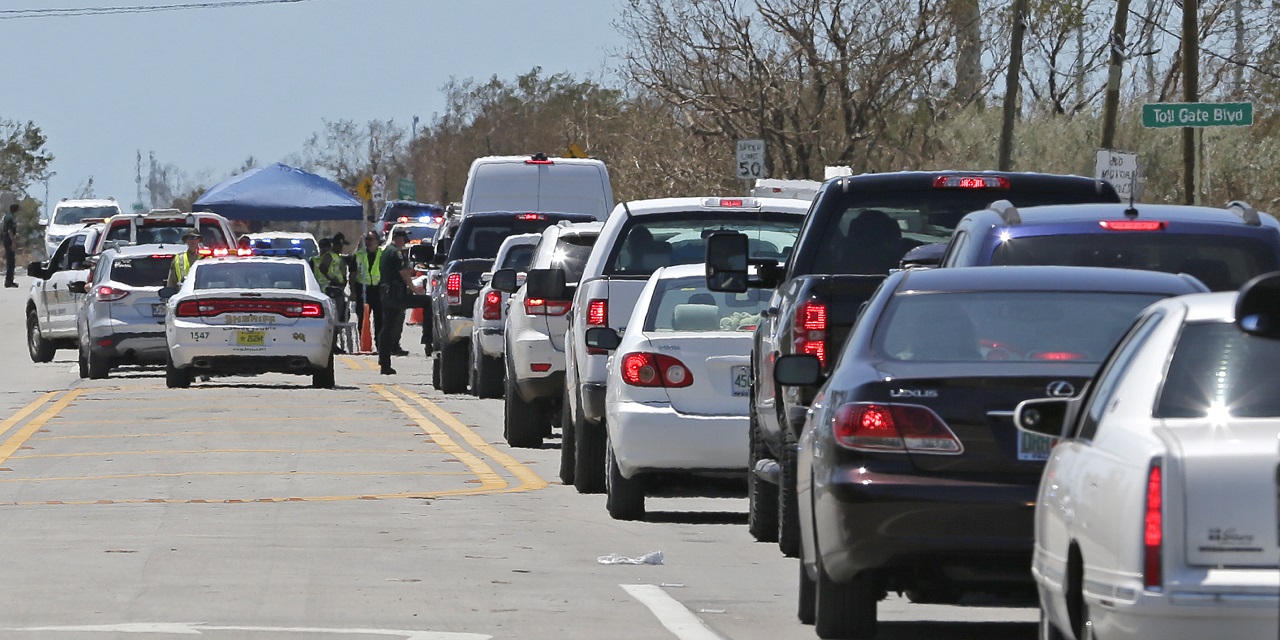 Motorists line up to enter the Florida Keys at a checkpoint in the aftermath of Hurricane Irma, Thursday, Sept. 14, 2017, in Florida City, Fla. Residents of the Florida Keys continue to be turned away.

The Latest on Hurricane Irma (all times local):

Jose has re-strengthened into a Category 1 hurricane in the Atlantic, but there is no current threat to land.

The U.S. National Hurricane Center said in an advisory Friday afternoon that Jose had sustained winds of 75 mph (120 kph). It was located about 640 miles (1,025 kilometers) south-southeast of Cape Hatteras, North Carolina, and about 485 miles (785 kilometers) southwest of Bermuda.

The hurricane was moving northwest at about 10 mph (17 kph), was expected to turn to the north-northwest by late Saturday and toward the north on Sunday.

Some strengthening was forecast through Saturday, with weakening possibly beginning on late Sunday.

The center said swells from the storm could create dangerous surf and rip current conditions in Bermuda, Bahamas, Hispaniola and Puerto Rico, as well as the southeastern coast of the U.S.

Long said at a briefing Friday that good progress is being made in getting people back into their homes or into temporary housing such as apartments or hotels. About 10,000 people in Florida remain in emergency shelters.

Federal officials are focused on restoring electrical power and getting gasoline into areas suffering fuel shortages. Long said the lack of electricity has affected fuel supplies because many gas stations haven't been retrofitted to run their pumps on generator power.

Energy Secretary Rick Perry, who appeared with Long, urged people still without electricity in Florida and other affected states to be patient. He said the severe damage from Irma's winds will require that parts of the power grid to effectively be rebuilt.

Perry said 60,000 utility workers from U.S. and Canada are in the disaster area working to get power back on.

Schools in one southwest Florida county have announced that classes won't begin again until Sept. 25.

Lee County schools Superintendent Greg Adkins told local news outlets Thursday that they'd hoped to re-open Monday, but repairs to buildings are taking longer than expected. He said the extra week will give officials more "breathing room" to deal with the challenges it faces in getting schools up and running again.

Adkins said most of the district's buildings received minor damage from the storm. In some cases, water got into buildings and trees were knocked down. Three schools need significant roof repair. And many of the portable classrooms were either damaged or destroyed. He doesn't yet have estimates on the repair costs.

He said all teachers and staff should report to school Sept. 22.

More than 80 percent of Floridians have gotten their power restored after Hurricane Irma roared through the state.

Tens of thousands of customers in southwest Florida and south Florida remain without electricity. Nearly 25 percent of all customers in Miami-Dade County still don't have power.

Florida Power & Light officials earlier this week said that most customers on Florida's east coast would have their electricity restored by Sunday evening. They said it would take until Sept. 22 to get electricity back to the majority of customers in southwest Florida.

Tens of thousands of customers in Pinellas County on the state's west coast still don't have electricity as well.

Authorities say a family of four is being treated for carbon monoxide poisoning from a generator in Hialeah, a suburb of Miami.

NBC 6 in Miami reports that a man came home early Friday and found his wife and two children unconscious. Police tell the station that all three eventually woke up and the entire family was taken to Mercy Hospital for treatment of symptoms that included headaches, chest pain and nausea.

The television stations reports that the victims had 20 percent carbon monoxide in their systems. A generator had been left near an open door of the family's apartment. Police told other tenants to turn off their generators while the investigation continues.

An NPS statement on the parkway's website says conditions vary across the parkway, and while some sections have reopened, others require more in-depth and technical cleanup to mitigate substantial tree and rock damage.

A woman has died and three men are in critical condition in a suspected case of carbon monoxide poisoning caused by faulty generator use in Florida's Palm Beach County.

Palm Beach County Fire Rescue Capt. Albert Borroto said crews responded an unknown medical call Thursday night in Loxahatchee. He says that as firefighters approached the home, their carbon monoxide detectors went off, which warned them of potential danger as they went inside.

Firefighters put on air tanks and found the woman dead inside the home with three critically ill men.

Borroto says the generator wasn't running when they arrived, but investigators believe it had been running all day. The generator is a large 15,000-watt model that's capable of powering an air conditioner. It was outside, near the garage, which was left open a few inches. He said that allowed the carbon monoxide to seep inside.

Georgia's agricultural leaders say Irma's path through the state has left pecan and cotton crops vulnerable, but could signal a boon for another signature state crop.

State Agriculture Commissioner Gary Black told WABE-FM that 50 percent of Georgia's pecan crop might be lost, which will have negative ramifications for an already struggling rural economy.

The station reports that crop consultants estimate between 25 percent and 50 percent of the cotton yield is gone, as cotton is susceptible to high winds as it nears harvest.

Several nursing homes have been evacuated because of a lack of power or air conditioning, while utility workers raced help to dozens of others still lacking electricity as of Thursday. Homebound seniors found help from charities, churches and authorities.

Meanwhile, detectives were combing through the Hollywood facility where eight elderly residents died amid sweltering heat.

Statewide, 64 nursing homes were still waiting for full power Thursday, according to the Florida Health Care Association. The separate Florida Assisted Living Association said many of its South Florida members lacked electricity. The group was working on a precise count.

The Latest: Trump hands out sandwiches at mobile home park

The Latest: 20th Irma victim in the US identified