The Latest: Maduro rejects European demands and US aid 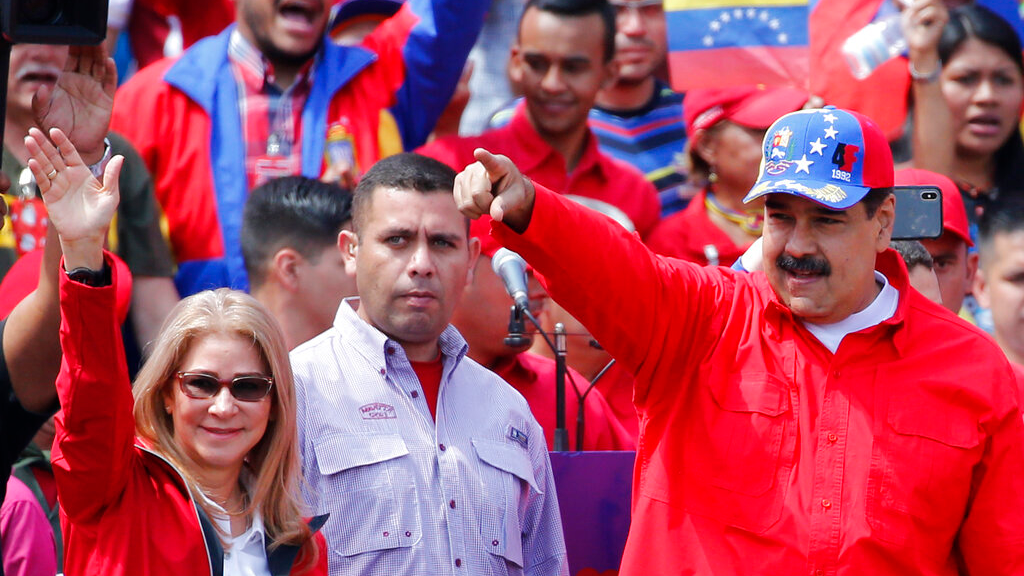 The Latest on Venezuela's political crisis (all times local):

Germany, Britain, and France are among the nations that announced support for Guaido on Monday. The EU nations say Maduro's election was fraudulent and that he ignored their deadline to announce a new round of democratic presidential elections.

Maduro was especially harsh on Spanish Prime Minister Pedro Sanchez, a fellow socialist. Maduro said Sanchez would have "blood on his hands" if a coup is carried out against him.

In a live address on state television, Maduro said he refuses ultimatums from any country.

Maduro also rejected a U.S.-backed effort to send emergency food and medicine into his country, saying Venezuela isn't a nation of beggars.

Guaido, meanwhile used Twitter to express gratitude to the EU leaders for supporting what he called Venezuela's fight for freedom.

A senior Canadian official says the country will announce new humanitarian assistance for countries most affected by the Venezuelan refugee crisis.

The official says the announcement will come Monday at a meeting of nations that have recognised Venezuelan opposition leader Juan Guaido as the interim president of his crisis-torn country.

Canadian Prime Minister Justin Trudeau and Foreign Minister Chrystia Freeland are hosting the meeting of the Lima Group, a regional bloc of 13 countries that have been vocal in denouncing Venezuelan President Nicolas Maduro.

The official says Venezuela will need substantive international support because the economic and social reconstruction effort in the country will be monumental.

The official spoke on condition of anonymity for lack of authorization to discuss it before an official announcement.

Venezuelan President Nicolas Maduro says in an Italian TV interview that he has written to Pope Francis asking for help in fostering dialogue.

Maduro said in the interview with Sky TG24 that he hopes the letter is in route or has reached the Vatican.

In the interview conducted at a military base, Maduro describes himself as being "in the service of Christ's cause and in this spirit" he has asked Francis to "facilitate and reinforce" dialogue with his "best effort, his willingness."

Maduro added he was hoping for a "positive response."

He appealed to Europe not to be "dragged along by the craziness" of President Donald Trump in raising the possibility of a foreign intervention.

The Netherlands and Austria have joined other European countries in recognizing Juan Guaido as Venezuela's interim president.

Dutch Foreign Minister Stef Blok says in a tweet that he made the call after an eight-day deadline for Venezuela to call free and fair elections expired. Blok said Monday the Dutch "want freedom and democracy to return to Venezuela asap."

Chancellor Sebastian Kurz announced the decision in a Spanish-language tweet on Monday after President Nicolas Maduro ignored an ultimatum to call a new election.

Kurz said Guaido, who heads the opposition-controlled National Assembly, has "our full support in his efforts to re-establish democracy in Venezuela."

Macron also declared that Venezuelans "have the right to express themselves freely and democratically."

Moments after Foreign Minister Jean-Yves le Drian said France is recognizing Guaido, Macron posted a message on Twitter on Monday to express his support for the head of the Venezuelan congress.

At least eight other European nations did the same on Monday after current Venezuelan President Nicolas Maduro defied their call to resign and hold a new vote. Sweden said the vote that brought Maduro to power was not free or fair.

Germany and several other countries in the European Union had given Venezuelan President Nicolas Maduro's government an eight-day deadline to call a new presidential election. That ultimatum expired on Sunday.

German Chancellor Angela Merkel said during a visit to Japan on Monday that Guaido "is the legitimate interim president."

Germany joins Spain, Britain, France, Sweden, Austria, Denmark and Lithuania in recognising Guaido on Monday. He also has the support of Washington and most South American nations.

Venezuelan President Nicolas Maduro is remaining defiant amid European Union pressure to stand down and is accusing the United States of preparing a coup in the South American country.

Maduro told Spanish TV channel La Sexta in an interview broadcast late Sunday that he "accepts ultimatums from nobody," amid demands by some EU countries that opposition leader Juan Guaido take over.

The Trump administration has also backed Guaido, after he declared himself the interim president of Venezuela on Jan. 23.

He accuses the U.S. of "wanting to return to the 20th century of military coups, subordinate puppet governments and the looting of resources."

In an interview Monday with Swedish broadcaster SVT, Wallstrom said Venezuelans "now must get new, free and fair elections instead."

She said "we support and consider Juan Guaido and the National Assembly as the only legitimate representatives of the Venezuelan people" — a move made by several European Union nations on Monday.

Wallstrom also says "Venezuela is a country in disrepair. There is a lack of food and medicines, it's (facing) inflation and mass demonstrations."

Guaido declared himself Venezuela's legitimate ruler on Jan. 23 and has the support of Washington and most South American nations.

Spanish Prime Minister Pedro Sanchez says his government is endorsing Juan Guaido as interim president of Venezuela and is urging him to call a presidential election as soon as possible.

Sanchez on Monday carried out his threat to recognize Guaido's leadership if embattled President Nicolas Maduro hadn't called a presidential election by Sunday.

Other European Union countries followed suit, a week after the European Parliament has called on the EU's member states to recognise Guaido as Venezuela's interim president.

Spain has strong historical, cultural and economic ties to Venezuela, and its support for Guaido is a diplomatic blow to Maduro.

Sanchez says, "we are working for the return of full democracy in Venezuela: human rights, elections and no more political prisoners."

He says Spain is also working on a humanitarian aid program for Venezuela.

Britain has joined Sweden and France in recognising Juan Guaido as the interim leader in Venezuela.

U.K. Foreign Secretary Jeremy Hunt says in a tweet that Venezuelan President Nicolas Maduro had not called for a new presidential election within the eight-day time limit set.

He tweeted that the "UK alongside European allies now recognises @jguaido as interim constitutional president until credible elections can be held. Let's hope this takes us closer to ending humanitarian crisis."

Opposition leader Guaido declared himself Venezuela's legitimate ruler on Jan. 23, and has the support of Washington and most South American nations.

Spain, France and Sweden have all announced that they are recognising Venezuelan opposition leader Juan Guaido as the country's interim president and are urging him to hold a new presidential election.

Spanish Prime Minister Pedro Sanchez told reporters in Madrid on Monday that "we are working for the return of full democracy in Venezuela: human rights, elections and no more political prisoners."

Swedish Foreign Minister Margot Wallstrom told Swedish broadcaster SVT the vote that brought Maduro to power was not a "free and fair election."