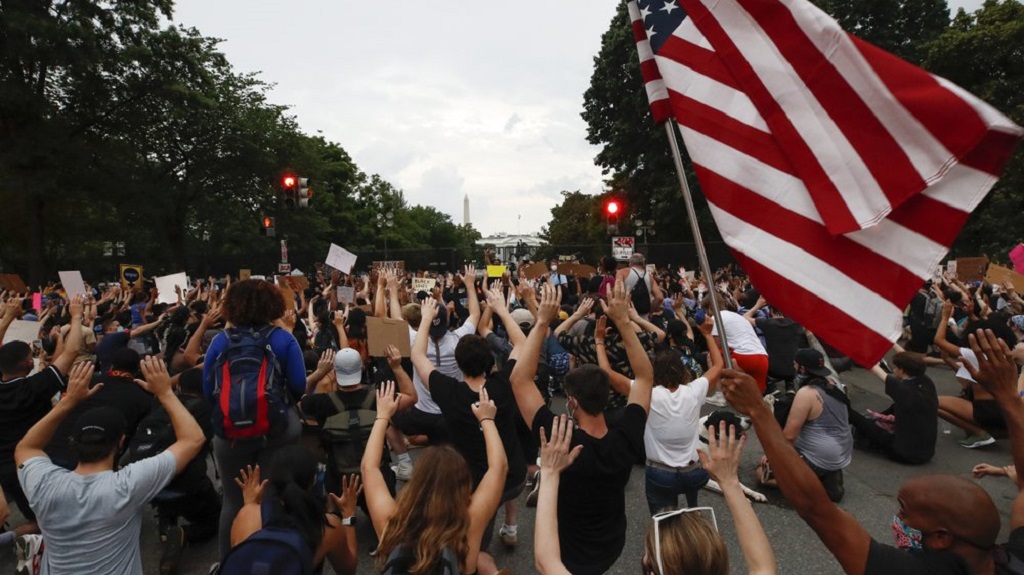 Demonstrators protest Thursday, June 4, 2020, near the White House in Washington, over the death of George Floyd, a black man who was in police custody in Minneapolis. Floyd died after being restrained by Minneapolis police officers. (AP Photo/Alex Brandon)

PARIS — Police have banned a planned protest against police violence in Paris on Saturday because of health measures restricting gatherings during the coronavirus pandemic.

A protest decrying systemic racism and calling for justice for Floyd and other victims of police brutality was planned to take place outside the US Embassy.

But on Friday, Police Prefect Didier Lallement said such protests "are not authorized" because virus safety measures "prohibit any gathering, in the public space, of more than 10 people."

He issued an order banning the Floyd demonstration and another protest planned for the same day.

Lallement said: "in addition to the disturbances to public order that these rallies can generate ... the health risks they could cause remain significant."

France has had over 29,000 people die in the pandemic.

BEIRUT — The Islamic State group says protests across the United States and the repercussions of the coronavirus on Western countries will weaken these nations and divert their attention from Muslim countries.

The comments published Friday in an editorial in the extremist group's online weekly newspaper al-Nabaa were its first on protests in America after last week's death of African American George Floyd while a policeman put a knee to his neck.

Al-Nabaa said protests have been occurring in the US since it was founded, but this year "coincide with the negative effects of the pandemic on the country's economy." Al-Nabaa said the pandemic will weaken "infidel states."

In recent weeks, the militants have taken advantage of the pandemic to launch deadly attacks in their former self-declared caliphate in parts of Iraq and Syria.

The group that once controlled large parts of Iraq and Syria used these territories to launch attacks worldwide that killed hundreds of people since declaring their so-called caliphate in 2014.

Twitter has blocked a Trump campaign video tribute to George Floyd over a copyright claim, in a move that adds to tensions between the social media platform and the US president, one of its most widely followed users.

The company put a label on a video posted by the @TeamTrump account that said, "This media has been disabled in response to a claim by the copyright owner."

The video was still up on President Donald Trump's YouTube channel and includes pictures of Floyd, whose death sparked widespread protests, at the start.

"Per our copyright policy, we respond to valid copyright complaints sent to us by a copyright owner or their authorized representatives," Twitter said in a statement.

The three minute and 45-second clip is a montage of photos and videos of peaceful marches and police officers hugging protesters interspersed with some scenes of burning buildings and vandalism, set to gentle piano music and Trump speaking.

It's the latest action that Twitter has taken against Trump, who has threatened to retaliate against social media companies.

COPENHAGEN, Denmark — A member of Finland's populist party has been expelled from its parliamentary group in response to a series of racist social media posts by the lawmaker — the latest one was on George Floyd.

The opposition Finns Party decided Thursday to expel Ano Turtiainen from the group. He has since conceded it was racist, deleted the tweet and apologized to the party that was formerly known as the True Finns, according to Finnish broadcaster YLE.

"This time that was not enough. The decision was unanimous," spokesman Ville Tavio said of the apology and the decision to expel Turtiainen, according to YLE.

Parliament speaker Matti Vanhanen described the tweet, showing a doctored image of Floyd being arrested with a pink head and the words "Pink Floyd," as "shocking and simply wrong from the standpoint from universal human values."

Turtiainen's exit means meant the Finns Party is no longer the largest group in the country's parliament.

JOHANNESBURG, South Africa — South Africa's ruling party says it is launching a "Black Friday" campaign in response to the "heinous murder" of George Floyd and "institutionalized racism" in the US, at home, in China and "wherever it rears its ugly head."

A statement by the African National Congress says President Cyril Ramaphosa on Friday evening will address the launch of the campaign that calls on people to wear black on Fridays in solidarity.

The campaign is also meant to highlight "deaths by citizens at the hands of security forces" in South Africa, which remains one of the world's most unequal countries a quarter-century after the end of the racist system of apartheid.

"The demon of racism remains a blight on the soul of our nation," the ANC statement says.

SYDNEY — Thousands gathered in Australia's capital on Friday to remind Australians that the racial inequality underscored by George Floyd's death was not unique to the United States.

The Canberra rally that attracted 2,000 demonstrators comes before larger rallies are planned for Australia's most populous cities on Saturday, with authorities concerned about maintaining social distancing.

Police were on Friday seeking a court order banning a rally in Australia's largest city, Sydney, because of the pandemic risk. A state government leader urged demonstrators not to attend a rally in Melbourne, the country's second-largest city.

Matilda House, an elder of the Ngambri-Ngunnawal family group who are the traditional owners of the Canberra region, said: "Australians have to understand that what's been going on the United States has been happening here for a long time."

Australia had to move beyond a colonial attitude "that blacks are only here to be walked on, trodden on and murdered," House said in the first speech of the rally.

NEW YORK — Patrick Mahomes, Saquon Barkley and Michael Thomas are among more than a dozen NFL stars who united to send a passionate video message to the league about racial inequality.

Thomas, the New Orleans Saints wide receiver who has led the league in receptions the past two seasons, opens the video with the statement: "It's been 10 days since George Floyd was brutally murdered."

The players then take turns asking the question, "What if I was George Floyd?"

The players then name several of the black men and women who have recently been killed, including Floyd, Breonna Taylor, Ahmaud Arbery and Eric Garner.

The video closes with the players insisting they "will not be silenced."

BUFFALO, NY — A police commissioner has suspended two officers following video that shows a Buffalo officer appearing to shove a man who walked up to police.

Video from WBFO shows the man appearing to hit his head on the pavement, with blood leaking out as officers walk past to clear Niagara Square on Thursday night.

Erie County Executive Mark Poloncarz tweeted that the man was hospitalized and stable, but his exact condition wasn't immediately known.

WIVB-TV reports that Buffalo police initially said in a statement a person "was injured when he tripped & fell."

New York Attorney General Letitia James's office has tweeted that they're aware of the video.

NEW YORK -- Protesters stayed on the streets of New York City after curfew for another day Thursday, spurred by the death of George Floyd.

Actions by the protesters included gathering at Brooklyn's Cadman Plaza, the site where police used batons against demonstrators who were out past the city-imposed curfew a night earlier.

Protesters continued past the 8 pm curfew Thursday, even after Gov. Andrew Cuomo and Mayor Bill de Blasio sought to deflect criticism over harsh tactics from police enforcing it.

Thousands of protesters were out after curfew, and so were police.

At some locations, officials watched, but didn't immediately move in. At other spots, they made orderly arrests without the batons and riot gear, like a night earlier.