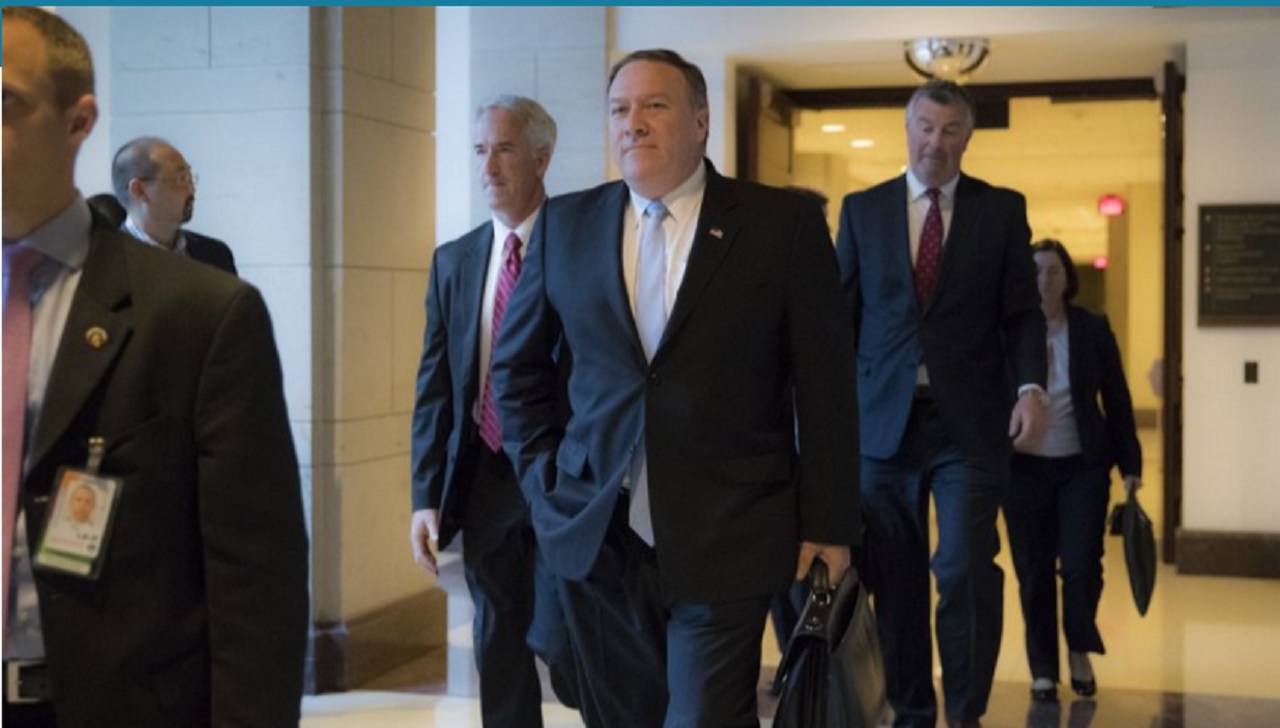 CIA Diector Mike Pompeo departs the Capitol after briefing members of the House Intelligence Committee in the aftermath of President Donald Trump reportedly sharing classified information with two Russian diplomats during a meeting in the Oval Office, in Washington, Tuesday, May 16, 2017.

The Latest on President Donald Trump (all times EDT):

Russian President Vladimir Putin has lashed out at U.S. politicians whipping up what he described as “anti-Russian sentiment” for being either “stupid” or “dangerous.”

Speaking at a joint news conference with the visiting Italian prime minister, Putin said on Wednesday Moscow initially found debates about Russia’s meddling in U.S. politics as “funny” but said Moscow is now “concerned because it’s hard to imagine what the people who produce such nonsense can come up with next.”

Putin dismissed the U.S. politicians, whom he did not identify, as either being “stupid” or “dangerous and unscrupulous” who are wittingly “causing the damage to their own country.”

Asked what he thinks of Trump presidency, Putin said it’s up to the American people to judge but his performance can only be rated “only when he’s allowed to work at full capacity,” implying that someone is hampering Trump’s efforts.

Trump came under fire earlier this week after it was revealed that he shared the sensitive intelligence with Russian Foreign Minister Sergey Lavrov and Russian ambassador to the U.S. Sergei Kislyak.

Speaking at a joint news conference with the visiting Italian prime minister on Wednesday, Putin said he had “no other explanation” as to why Trump came under attack other than “political schizophrenia.” Putin even suggested that Russia share the records of last week’s talks between Trump and Lavrov with the U.S. Congress, if the White House approved.

Putin joked that that he would reprimand Lavrov because “he hasn’t shared those secrets with us.”

The Kremlin isn’t commenting on the details of the classified information that President Donald Trump shared with the Russian foreign minister and the Russian ambassador last week.

The White House on Tuesday defended Trump discussing with Russian Foreign Minister Sergey Lavrov and Ambassador to the U.S. Sergey Kislyak an Islamic State group terror threat related to the use of laptop computers on aircraft.

Speaking to Russian news agencies on Wednesday Yuri Ushakov, an aide to President Vladimir Putin, would not comment the contents of last week’s talks among Trump, Lavrov and Kislyak.

Ushakov said “any contacts” with the U.S. president are “important” but he would not reply to the question whether the classified information that Trump reportedly shared with Lavrov and Kislyak was valuable for Russia.

The White House issued a furious denial after the notes were disclosed late Tuesday, near the end of a tumultuous day spent beating back potentially disastrous news reports from dawn to dusk.

The bombshell Comey news came as the beleaguered administration was still struggling mightily to explain Monday’s revelation that the president had disclosed highly classified information to the Russian foreign minister and the country’s ambassador to the United States.

Defending Trump’s actions, officials played down the importance and secrecy of the information, which had been supplied by Israel under an intelligence-sharing agreement, and Trump himself said he had “an absolute right” as president to share “facts pertaining to terrorism” and airline safety with Russia.

Trump defends Comey firing, says both parties will thank him