The Latest: Rescues attempts mount as Harvey pours it on 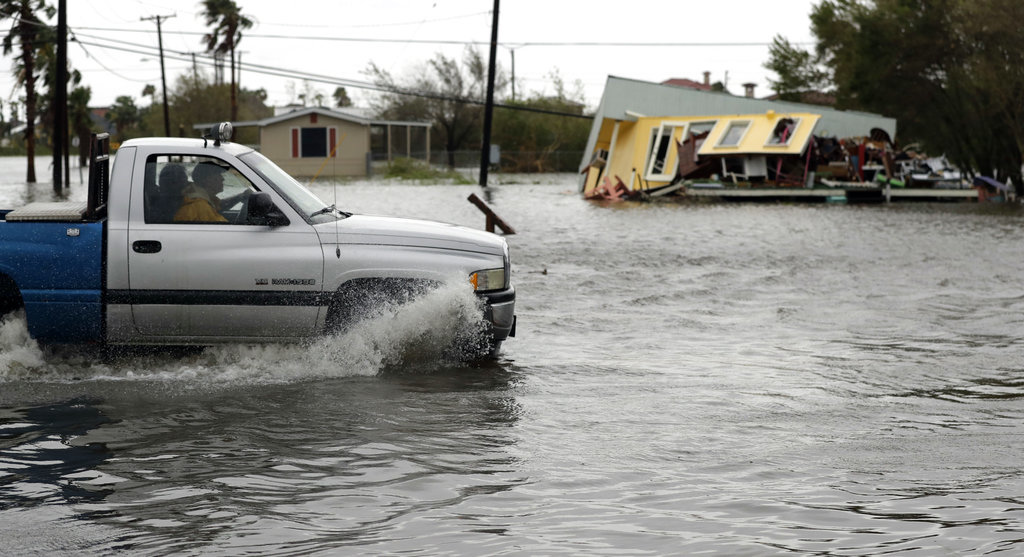 A truck in flood waters passes a home damaged in the wake of Hurricane Harvey, Saturday, Aug. 26, 2017, in Aransas Pass, Texas. Harvey rolled over the Texas Gulf Coast on Saturday, smashing homes and businesses and lashing the shore with wind and rain so intense that drivers were forced off the road because they could not see in front of them. (AP Photo/Eric Gay)

The Latest on Tropical Storm Harvey (all times local):

Authorities say rescue attempts continue in Houston for those stranded inside flooded homes and submerged vehicles in the wake of Harvey.

The Houston Chronicle reports that hundreds of calls have been fielded for water rescues as of early Sunday, including Houston police officials who evacuated two apartment complexes and rescued more than 50 children.

Gonzalez actively used Twitter overnight to field assistance for those trapped inside water-soaked homes, attics and vehicles. Those appealing for assistance or being steered to help via Gonzalez's Twitter feed included a person suffering "cardiac-arrest," and a woman who posted: "I have 2 children with me and the,water is swallowing us up. Please send help."

Gonzalez at one point appealed for calm and patience, saying officials were "trying to make it to everyone as best we can."

Turner's official Twitter account said "911 services at capacity. If u can shelter in place do so, a few inches in your home is not imminent danger. Only call if in imminent danger."

The hurricane center says in its 4 a.m. Sunday update that the tropical storm has maximum sustained winds of 45 mph (72.42 kph) and remains stationary about 45 miles (72.42 kilometers) northwest of Victoria, Texas.

The center says Harvey is likely to weaken to a tropical depression later Sunday. Harvey made landfall Friday night as a Category 4 hurricane.

Meanwhile, the National Weather Service says a Flash Flood Emergency over west and central Harris County, where Houston is located, as well as for eastern Fort Bend and northern Brazoria counties remains in effect until 6:15 a.m. Sunday, calling it a "Particularly Dangerous Situation."

Jersey Village, Texas, officials are recommending that people who live along the White Oak Bayou, about 17 miles northwest of Houston, consider whether they need to evacuate their homes.

Jersey Village City Manager Austin Bleess says the city issued a notice to residents about 1:30 a.m. saying the bayou looked like it would be out of its banks before long. He says city officials worried that streets may soon become impassable and wanted those residents to have time to make arrangements.

"Certainly if people can stay in their homes, they can do that," Bleess said. "It's quite possible that the streets could get impassable so we wanted to get that recommendation out."

Bleess says the city is in the process of opening a storm shelter at the Champion Forest Baptist Church, Jersey Village chapter.

The National Hurricane Center says Harvey continues to weaken at a slow pace as it produces torrential rains across parts of Southeast Texas.

In its early Sunday update, the hurricane center said the tropical storm has maximum sustained winds of 45 mph (72.42 kph) and it is practically stationary about 45 miles (72.42 kilometers) northwest of Victoria, Texas.

The airport in Austin, about 165 miles (265.53 kilometers) west of Houston, reported sustained winds of 38 mph.

The center says Harvey is likely to weaken to a tropical depression later Sunday. Harvey made landfall Friday night as a Category 4 hurricane.

Meanwhile, the National Weather Service extended a Flash Flood Emergency over west and central Harris County, where Houston is located, as well as for eastern Fort Bend and northern Brazoria counties until 6:15 a.m. Sunday, calling it a "Particularly Dangerous Situation."

The Harris County medical examiner's office confirmed the death of one person late Saturday in Harris County, but the office did not identify the cause of death.

Gary Norman, a spokesman for the Houston emergency operations center, says the woman appeared to have gotten out of her vehicle in high water. She was found by neighbors about 30 yards away from the vehicle. Norman says she was pronounced dead at the scene by a doctor who was in the area.

Harvey came ashore Friday night as a Category 4 hurricane, but has since been downgraded to a tropical storm.