The Latest: 'Serious' signs of arson seen in Greece fire 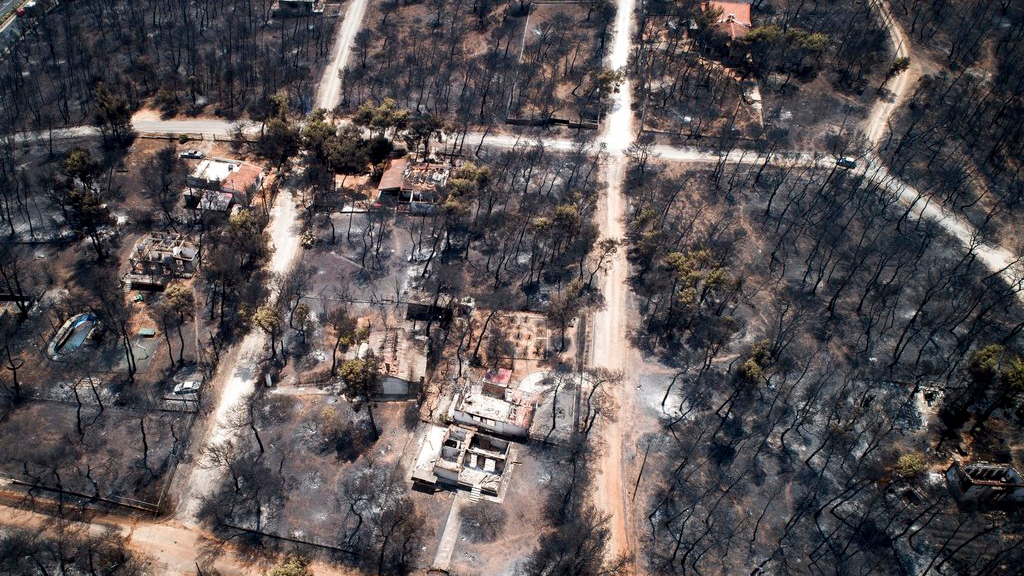 This Wednesday, July 25, 2018 aerial photo shows burnt houses and trees following a wildfire in Mati, east of Athens. Frantic relatives searching for loved ones missing in Greece's deadliest forest fire in decades headed to Athens' morgue on Thursday, July 26, 2018 as rescue crews and volunteers continued searches on land and at sea for potential further victims. (Antonis Nikolopoulos/Eurokinissi via AP)

The Latest on Greece's forest fires (all times local):

Greek authorities say they have "serious indications" a wildfire near Athens that killed at least 82 people was set deliberately.

The death toll from the fire that swept through a coastal area east of Athens rose to 82 on Thursday morning as the search for more victims on land and at sea continued.

Germany's federal criminal police department says a team of its forensics specialists is in Greece to help officials there identify victims from this week's deadly forest fires.

The team includes veterans of such major disasters as the 2002 midair plane crash over Ueberlingen, Germany that killed 71 people and the 2004 Indian Ocean tsunami that killed at least 225,000 across multiple Asian countries.

The Greek national fire department said Thursday morning that the death toll from the fire that broke out Monday night was 82.

The chief coroner in Athens says the task of identifying victims is difficult because most of the bodies at the morgue were severely burned.

Another complicating factor is wind-whipped flames raced through a large area. Authorities are working to put together a complete list of those missing.

A spokesman for the Belgian foreign ministry says a Belgian tourist was killed in Greece's ferocious wildfires as he tried to flee blazes in the summer resort of Mati north of Athens.

The spokesman, who spoke to the Associated Press Thursday on customary condition of anonymity, said the tourist was among a larger group staying at an area hotel that was ordered evacuated to the nearby sea as the flames approached.

But he said the exact circumstances under which the Belgian man died during Monday's blaze are unclear.

Belgian Foreign Minister Didier Reynders had confirmed the man's death in post on his personal Twitter account on Wednesday. Reynders said that the Belgian embassy in Athens is assisting the man's "young son and family."

Frantic relatives searching for loved ones missing in Greece's deadliest forest fire in decades are heading to Athens' morgue, as rescue crews and volunteers continued searches on land and at sea for potential further victims.

Those arriving at the morgue Thursday were being informed of the necessary steps to match the missing and the dead, including providing DNA samples and dental records.

The fire northeast of Athens in the area of Rafina, a seaside resort of permanent residences and holiday homes popular with Athenians and tourists, broke out Monday and swept through the area fanned by gale-force winds. Hundreds fled to nearby beaches, with many swimming out to sea to escape the ferocious flames and choking smoke that killed 81 people.