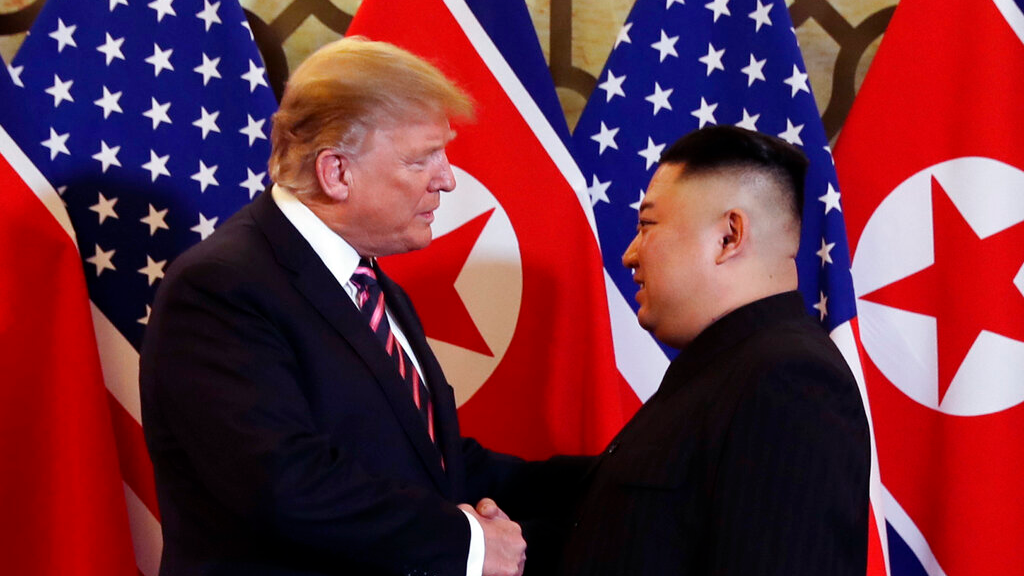 The Latest on the summit between North Korean leader Kim Jong Un and U.S. President Donald Trump (all times local):

President Donald Trump and North Korean leader Kim Jong Un are striking a positive tone as they begin their second summit in Vietnam.

Trump says, "I thought the first summit was a great success and I think this one, hopefully, will be equal or greater than the first." He says it's an honor to meet with Kim once again.

Trump stresses North Korea's "economic potential" as he prepares to encourage Kim to give up his country's nuclear weapons.

Speaking through an interpreter, Kim said Wednesday he is "confident of achieving the great results that everyone will welcome" during the summit.

President Donald Trump and North Korean leader Kim Jong Un are exchanging greetings as they kick off their second summit in Hanoi, Vietnam.

The two leaders exchanged handshakes, laughs and some small talk at the Sofitel Legend Metropole Hanoi hotel, where they're scheduled to meet for 20 minutes before sitting down for what the White House has described as a "social dinner."

Trump told reporters of the meeting: "We look forward to it, we both do."

Asked whether he might formally end the Korean War, he responded: "We'll see."

Trump earlier made the case that North Korea could thrive economically like Vietnam if the North ends its pursuit of nuclear weapons.

Trump said: "We'll see what happens, but he wants to do something great."

North Korean leader Kim Jong Un has arrived at a hotel in Hanoi, Vietnam, ahead of his planned dinner with U.S. President Donald Trump.

Kim is set to have what U.S. officials call a "social dinner" with Trump at Hanoi's Metropole Hotel on Wednesday.

The two leaders are to meet again on Thursday for a formal meeting on Kim's advancing nuclear program.

They met for the first time in Singapore last June, and that meeting ended with Kim pledging to work toward "complete denuclearization of the Korean Peninsula."

Trump and Kim are scheduled to meet for 20 minutes before sitting down for what the White House has described as a "social dinner" together.

Kim will be joined by Kim Yong Chol, his chief interlocutor with the U.S., and North Korea's minister of foreign affairs Ri Yong Ho.

Less than two hours before he is set to meet with North Korean leader Kim Jong Un in Vietnam, U.S. President Donald Trump is complaining about news coverage of their second summit.

In a Wednesday tweet, Trump is criticizing "false reporting (guessing)" about his intentions with respect to North Korea but isn't citing any.

He adds: "Kim Jong Un and I will try very hard to work something out on Denuclearization & then making North Korea an Economic Powerhouse."

Trump in recent days has signaled there is some flexibility on his previous demands that North Korea denuclearize before it sees some relief from crushing U.S. and international sanctions.

Trump and Kim are set to meet for what the White House is calling a "social dinner" on Wednesday and have formal meetings on Thursday.

U.S. President Donald Trump and North Korean leader Kim Jong Un will meet for what the White House is calling a "social dinner," as they begin their second summit in Vietnam.

White House press secretary Sarah Sanders says each of the leaders will be joined Wednesday by two of his senior-most aides, as well as interpreters.

Trump is to be joined by Secretary of State Mike Pompeo (pahm-PAY'-oh) and acting White House chief of staff Mick Mulvaney. Kim will bring Kim Yong Chol, his chief interlocutor with the U.S., and North Korea's minister of foreign affairs Ri Yong Ho.

They will be dining at Hanoi's Metropole Hotel, which also will host their formal meetings Thursday.

U.S. President Donald Trump is continuing to take political shots on foreign soil even as he prepares for a high-stakes meeting with North Korean leader Kim Jong Un.

Trump is tweeting during downtime at his hotel in Hanoi that he has now "spent more time in Vietnam than Da Nang Dick Blumenthal."

Trump was referring to Connecticut Sen. Richard Blumenthal, who served in the Marine Corps Reserves during the Vietnam War and apologized in 2010 for saying he had served in Vietnam.

Trump adds that Blumenthal's "war stories of his heroism in Vietnam were a total fraud."

Blumenthal is a Trump critic and has brushed off Trump's attacks in the past, tweeting in 2017 that Trump's "bullying hasn't worked."

Trump also is tweeting that he talked about the incident in his meetings with Vietnam's leaders Wednesday. That would be a highly unusual topic of conversation for an American president on the world stage.

A spokesman of South Korean President Moon Jae-in said Wednesday that any progress in Hanoi would be a positive development and downplayed concerns that Trump would fail to get a deal from Kim that meaningfully restricts the North's nuclear weapons capabilities.

Spokesman Kim Eui-kyeom says it would be unfair to rate the summit as a failure if it comes short of "big deals," saying "small deals" can be keys that open up bigger agreements later. The spokesman says, "A thousand-mile journey begins with the first step."

Moon has tried to maintain an impression that things are moving toward the North's denuclearization in the face of growing skepticism. He is trying to keep Washington hard-liners at bay and create more space for inter-Korean engagement.

North Korean officials have toured Vietnam's scenic Halong Bay and a nearby industrial site while leader Kim Jong Un spent his second morning in Hanoi inside a hotel preparing for his meetings with U.S. President Donald Trump.

Kim is expected to meet Trump during a dinner meeting later Wednesday.

U.S. aircraft manufacturer Boeing signed agreements with VietJet for 100 737 MAX planes and with Bamboo Airways for 10 787 Dreamliners as the two leaders looked on Wednesday.

The White House did not immediately provide details on the agreements.

Trump is scheduled to sit down with North Korea's Kim Jong Un later Wednesday in Hanoi for a second round of nuclear talks.

The mayor of Hanoi, Vietnam, is urging residents to be on their best behavior during the summit between North Korean and U.S. leaders so they can show the world the "civilized, elegant, friendly and hospitable people" of the nation's capital.

The statement from Hanoi Mayor Nguyen Duc Chung, posted on the city's website Tuesday, called for residents to "maintain and sustain Hanoians' code of behavior."

The mayor also urged residents to dress well and decorate the city with flags and flowers to welcome the visitors here for the summit.

An estimated 3,000 journalists are in Hanoi to cover the summit on nuclear disarmament.

The mayor says residents should also "refrain from hiking prices of goods and services during the summit."

President Donald Trump is calling the relationship between the U.S. and Vietnam an "example" of what can become of North Korea if it gives up its nuclear weapons.

Trump says, "We both felt very good about having this very important summit in Vietnam because you really are an example as to what can happen, with good thinking."

The Vietnamese leader says his country has "been making all necessary preparations to ensure the best conditions for the success of this very special meeting."

Trump is thanking Vietnam for hosting the summit and for agreeing to new trade deals with American companies, including Boeing.

U.S. President Donald Trump is meeting with his Vietnamese counterpart hours before he is set to sit down with North Korea's Kim Jong Un.

Trump is greeting Vietnamese President Nguyen Phu Trong, whose country is hosting the second summit between the leaders of the two technically-warring nations.

The two leaders are set to sign a commercial trade agreement Wednesday before Trump is to meet with Vietnam's prime minister.

Trump's courtesy call to the host nation's leadership is meant to provide Kim with a visualization of a potential future should he give up his country's nuclear weapons in a deal with the U.S. After a decade of bloody conflict that ended more than four decades ago, the U.S. and Vietnam are now economic and strategic partners.

President Donald Trump's eldest son is accusing Democrats of trying to distract his father during his summit with North Korea's Kim Jong Un.

Donald Trump Jr. told Fox News on Tuesday that he believed the Democrats deliberately scheduled the congressional testimony of Michael Cohen, the president's former fixer, opposite the summit in Hanoi, Vietnam.

Trump Jr. said that the Democrats were trying to "counterprogram the kind of progress" that could be achieved in the Vietnam gathering and that it was evidence of the "disdain" they hold for the president.

He also argued that it was proof the Democrats were more interested in scoring political points than in national security by attempting to "stymie" the denuclearization talks.

Cohen was sentenced to three years in prison for crimes including a campaign finance violation that he says was at the direction of the president.

President Donald Trump says Vietnam, the site of his second round of nuclear talks with Kim Jong Un, is thriving economically and that North Korea could, too, if it would give up its pursuit of nuclear weapons.

Before sitting down with Kim later Wednesday in Hanoi, Trump tweeted that "North Korea would be the same, and very quickly, if it would denuclearize. The potential is AWESOME, a great opportunity, like almost none other in history, for my friend Kim Jong Un."

In a second tweet, Trump took a shot at Democrats in Washington, saying they should stop telling him what to do with North Korea and "ask themselves instead why they didn't do 'it' during eight years of the Obama Administration?"