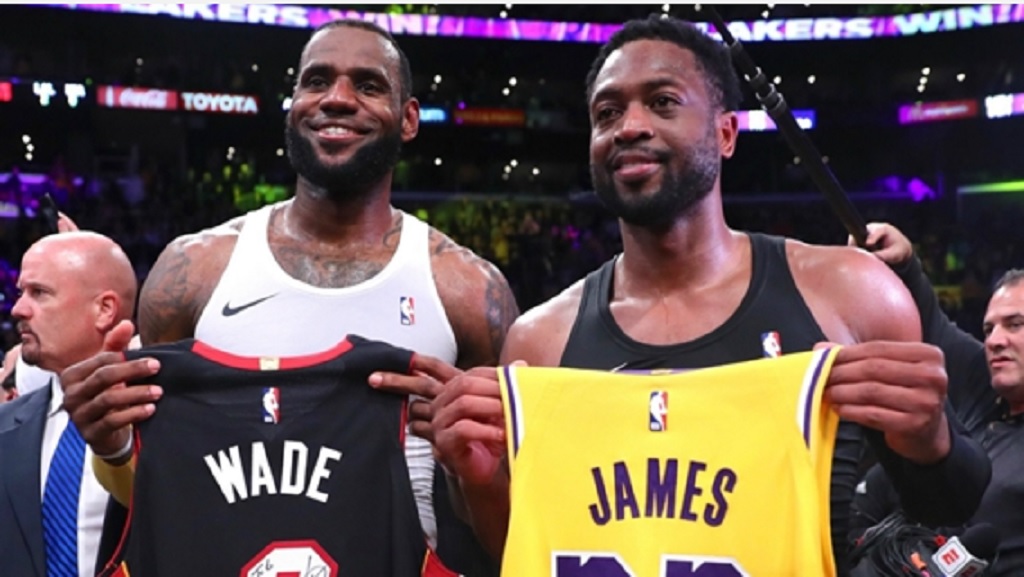 James and Wade were part of the 2003 NBA Draft and they were selected first and fifth, respectively.

They were team-mates for four seasons in Miami, claiming back-to-back NBA championships together in 2012 and 2013 and reaching the Finals four times.

James and Wade also shared the court with the Cleveland Cavaliers for 46 games last season, but Monday was their last encounter before Wade retires at the end of the season.

And James came out on top on an emotional night at Staples Center, where he led the Lakers with 28 points, 12 rebounds and nine assists, while Kyle Kuzma chipped in with 33 points.

Wade was ice cold to start and missed his first five field goals. He finished with 15 points on six-of-19 shooting before the 36-year-old and James exchanged jerseys post-game.

Meanwhile, reigning champions the Golden State Warriors extended their winning streak to four games thanks to Stephen Curry's 38 points in a 116-108 victory against the Minnesota Timberwolves as Draymond Green made his return to the line-up.

Anthony Davis bounced back from his underwhelming six-point performance on Sunday by scoring 41 points on 17-of-34 shooting in the New Orleans Pelicans' 113-100 loss to the Boston Celtics.

Luke Kennard scored a career-high 28 points on 11-of-18 shooting as the Detroit Pistons suffered a 116-102 defeat at the Philadelphia 76ers.

Oklahoma City Thunder star Paul George scored 31 points on a super efficient eight-of-10 shooting in a 122-113 victory over the Utah Jazz. George connected on five of his six three-point attempts.

Tobias Harris scored 33 points on 11-of-19 shooting in a 123-119 overtime victory for the Los Angeles Clippers against the Phoenix Suns.

Osman fails to impress as Cavs go down

Cedi Osman played 30 minutes for the Cleveland Cavaliers, but he scored eight points on three-of-13 shooting in a 108-92 loss to the Milwaukee Bucks.

Markieff Morris scored six points on two-of-11 shooting in the Washington Wizards' 109-101 defeat against the Pacers.

Both Portland and Houston have lost three of their last five games. Damian Lillard and CJ McCollum have been performing at a high level, but their supporting cast has not been good enough to get the job done lately. James Harden is leading the NBA in points per game, but the Rockets have struggled with depth on the wing and at the point guard spot. The Rockets expect Brandon Knight to play for the first time since his 2017 ACL surgery on Tuesday, so the game could give an exciting look into the structure of a deeper Rockets team. Houston have more talent down low in Clint Capela, but the game will likely be decided by guard play.