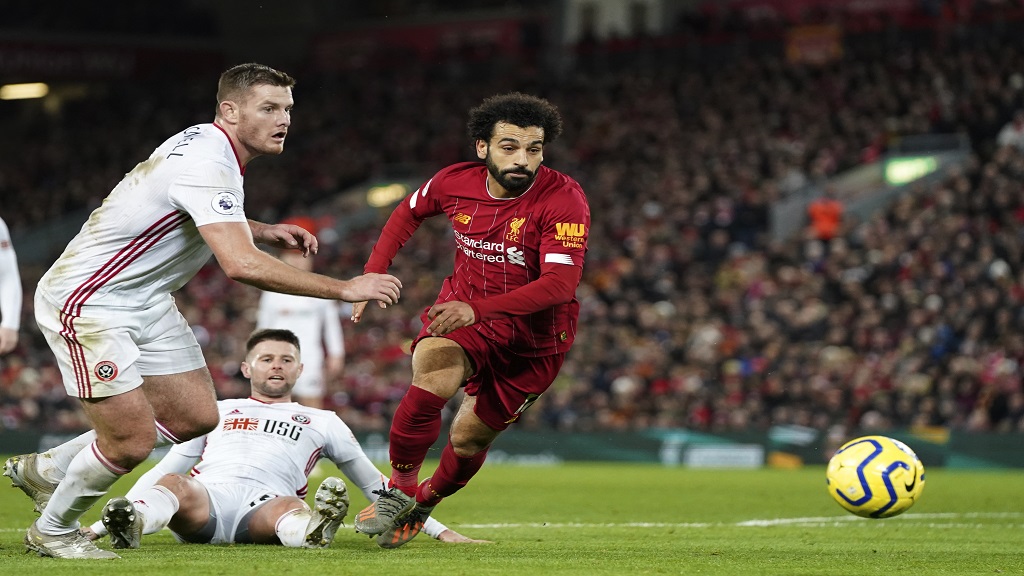 Liverpool will become only the third English Premier League (EPL) side to go unbeaten for more than a year after Mohamed Salah and Sadio Mane inspired Thursday's 2-0 win over Sheffield United at Anfield.

The Reds last suffered defeat on January 3 last year in a 2-1 loss to Manchester City and, on the day before the first anniversary of that reverse, they had little difficulty dispatching the Blades to ensure they pass that marker.

Jurgen Klopp was forced into a pre-match change when Naby Keita suffered a groin injury, though it seemingly had little impact as Liverpool were ahead by the fourth minute thanks to Salah.

The solid performance of Manchester United-owned goalkeeper Dean Henderson – who was also aided by the post in the second half – helped keep the score down, but Mane wrapped the win up in the 64th minute at the end of a blistering move to restore Liverpool's 13-point lead at the Premier League summit.

Dean Henderson showed his quality soon after, however, producing a remarkable save to deny Salah a second as he turned Jordan Henderson's cross towards goal.

The left-hand post was the next object in Salah's way, as his teasing cross in the 61st minute missed everyone and came back off the upright – Dean Henderson grabbing it before it could then cross the line, though there was no stopping the Reds soon after.

Alisson quickly rolled the ball out to Robertson and he fed the ball up the line for Mane, who offloaded to Salah and received an incisive return pass into the box, before finishing past the goalkeeper at the second time of asking.

United should have pulled one back late on, but Oli McBurnie could not get enough on Jack O'Connell's cross and Alisson stopped it just before it could cross the line.

What does it mean? Reds' run roars on

Although Liverpool last lost on January 3, 2019, their unbeaten run technically began nine days later with a 1-0 victory over Brighton and Hove Albion.

With their next Premier League outing not until January 11, they have only one more match standing in the way of their streak surpassing a full year.

Liverpool's Egyptian star did very little wrong on Thursday. Were it not for Dean Henderson's excellence, he would have almost certainly got a hat-trick, while he also provided the pass that teed up Mane.

Baldock's bad day at the office

The match started poorly for Baldock, as his slip allowed Robertson to set up Salah for the opener in the fourth minute. He never really recovered, struggling with the Scotland international and Mane throughout.

EPL: Almiron off the mark, Everton and Arsenal play out bore draw