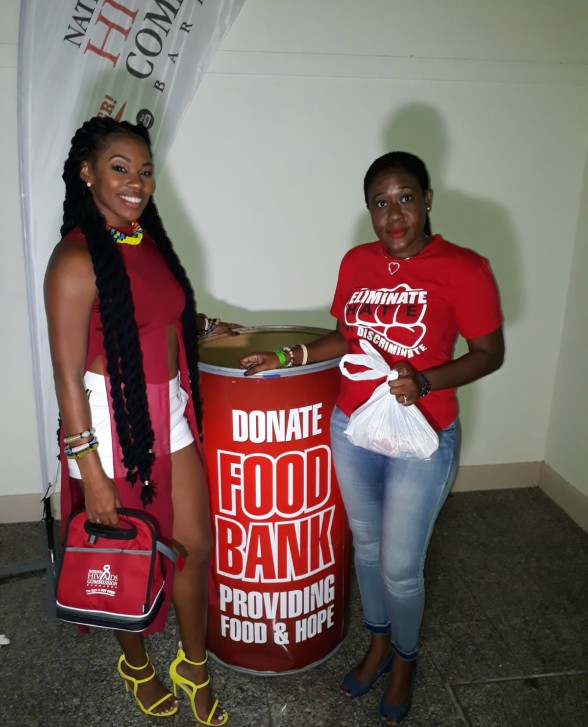 A call has been made for local singers and entertainers to lend their voice to spreading the message of HIV/AIDS awareness to the public.

This call came from Behavioural Change Specialist with the HIV/AIDS Commission, Cecilia Neblett-Murray during a handover of donations last Sunday at the Llyod Erskine Sandiford Center. The donations, from the patrons of Mahalia’s Corner, will go the HIV Food Bank.

“I would like to ask you to encourage other artistes to come on board, to be Ambassadors for the [HIV] Commission, to reducing the levels of HIV in this country,” Neblett-Murray said during the handover.

Earlier this year the HIV Food Bank had revealed they were in urgent need of perishable and non-perishable food items for clients.

Mahalia Cummins, lead singer of the band, 2 Mile Hill, and host of Mahalia’s Corner said the group was pleased to be on board with the initiative for the HIV/AIDS Commission’s food bank.

“As artistes who put on a show like Mahalia’s Corner, as a platform for other artistes, we have the power to get messages across to the public that they may not get otherwise.”

She said the band, and by extension the show, has the power to educate and bring more awareness to the HIV fight and they are happy to take on the huge responsibility.

“There is a lot of messaging going out all the time but why not add to that? Why not help where we can? We have the power to do that so we will never turn it down?”