Local chefs bring the flavour at Food and Rum Festival 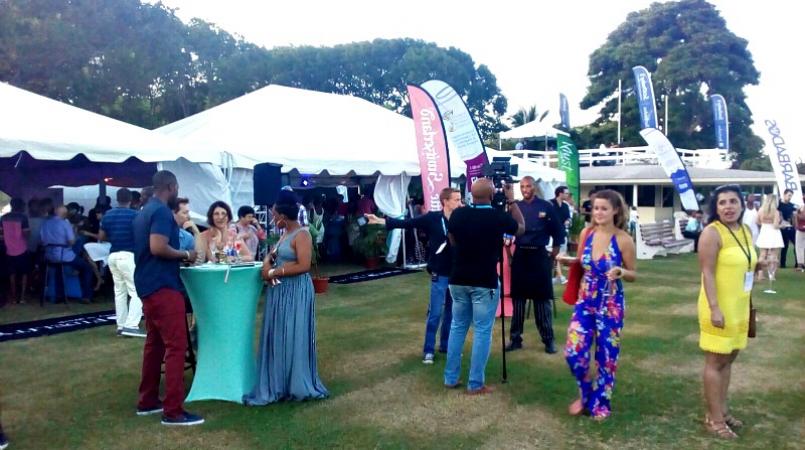 Patrons headed to Holders Hill Polo Club on Saturday, November 19 as The Barbados Food and Rum hosted their Taste The Spirits Of Polo Signature Rum event from 3:00 pm up until 7:00 pm.

Local chefs showcased their talent in this fun yet sophisticated setting as patrons were treated to delicious food and rum while witnessing polo, mingling and listening to music.

As Barbados' celebrates 50 years of Independence the festival leaned more to highlighting local chefs and Barbadian cuisine this year.

Loop News caught up with Jason Howard, a self-taught chef, who patrons pointed out as one of their favourites of the evening.

Howard, who specialises in modern Caribbean cuisine, described his craft as taking historical dishes and transforming them into something modern, funky, full of colour and life.

“What stood out to me is that this year they changed it around and they've actually focused on the local chefs pushing cuisine out and backing the local chefs and having them to do great food with local produce also!”

“I think that the feedback I would have gotten today was incredible! Everyone was saying that they loved the food as they kept coming back. You know when you hear the first preliminary feedback you tell yourself people are trying to be nice but then as the evening went along I kept getting more and more people coming to me and talking to me for hours on end telling me how great the food was. At the end of the day, I think we hit the mark and we did what we came here to do.”

'I would say that this event is important to get these young chefs out there and get Bajan chefs out to the public so that they are known and also so that these young chefs can show off the use of the local produce and make the public aware that there are different ways to use these produce. I would encourage people to come out and support because this is something Bajan and it’s something that we should be proud of – it's supporting our own chefs and our own local suppliers so come out and support your own!”

The first-timer admitted that he would definitely be coming back to the festival, even if not directly involved.

“This is the place to be...food and rum! What else could you want?' he smiled.

Chef Omar Robertson from Infusion Catering Services had a lot to say about traditional Bajan cooking. The chef, who has done a lot of traveling, takes influences from around the world and infuses them together to come up with something unique and different.

“There's nothing more Barbadian than rum and the combination of food and rum is as Barbadian as it gets! This is something that we need to keep doing and is something that we need to allow chefs to really shine in. If we are really to become the culinary capital [of the Caribbean] then we would really have to start pushing ourselves more where food is concerned. Tourists can go anywhere in the world and have Italian or French cuisine so when they visit Barbados they should try something that comes from here. I think this event with chefs like myself and Scott, Jason, Dane, Lauren...that's what we’re trying to do – give you a really nice interpretation of Bajan cuisine and using stuff that's traditionally Bajan.”

Chef Lauren Evelyn also stood out for her beautifully decorated desserts which one patron described as 'breathtaking' , as well as Chef Dane Saddler who did a variety of dishes.

Kirk Brown who hosted and DJed at the polo event last year was seen mingling with patrons and sampling food and beverages.

'This year I'm doing nothing but supporting! This event stimulates the locals and the tourists and really gives you something to look forward to,' he said. Browne, who confessed that he would be attending all the events this year, described the event as 'good for tourism' and 'great for the island!'. He professed that for entrepreneurs, 'It gives them a much-needed boost!'

'I like business a lot so from my perspective everyone is working, everyone is making money as well as exposing themselves. From the DJ, to the soundman, the bartenders, the bus boys, chefs, advertisers and all the way through to the radio stations!,' he said.

Browne highlighted Polo and the events at The Cliff and Hilton as his favourite events for the festival.