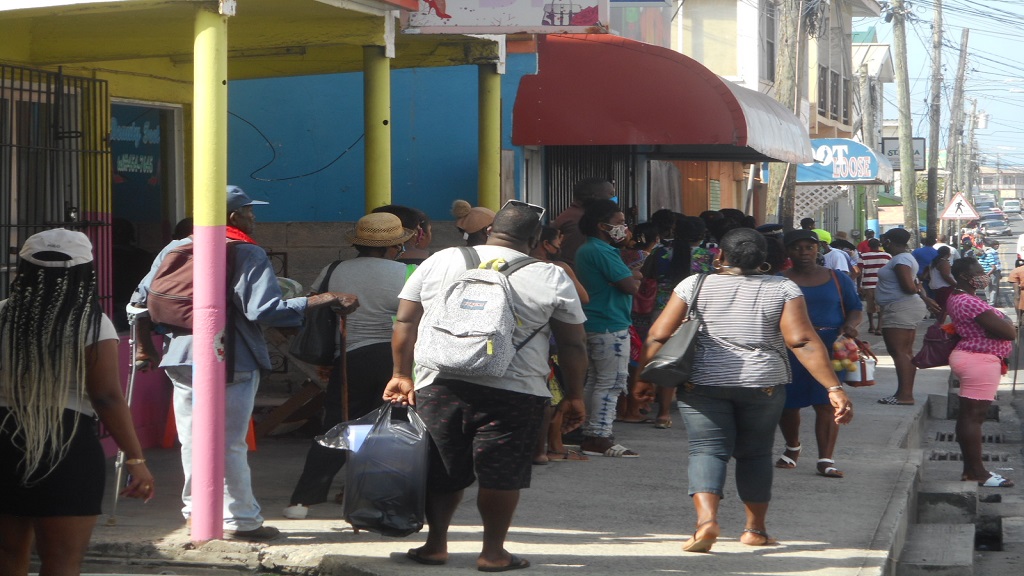 The desperation for alcoholic beverages in St Lucia since the suspension of all classes of liquor licenses over a month ago was quite evident in Vieux-Fort today, Friday, May 8, 2020, when the sale of alcohol in stores was once again allowed.

As early as 6 am today, persons from various parts of the south lined up in front of Uptowns Liquor in Beanfield, Vieux-Fort, braving the scorching early morning heat, waiting for the popular supermarket to open.

All the other liquor stores in Vieux-Fort also had long lines, with people disregarding the importance of social distancing amidst the coronavirus pandemic.

Many people bought large quantities of alcoholic beverages for fear that the government may announce another suspension of the liquor licenses. They envisaged that some young men would disregard the protocols government put in place to contain the spread of the deadly coronavirus, which could necessitate another ban.

According to some women Loop News spoke with, they also bought large quantities of alcoholic beverages to celebrate Mother's Day this Sunday, May 10.

Based on the type of rum seen purchased by many young men, it appears Bounty rum is a popular choice.

Tyrana Joseph said she is happy to be able to purchase alcoholic beverages after a long time but expressed the view that it can lead to problems among young men.

One young man jokingly told Loop News: “For months we have been sanitizing our hands, now it’s the time for us to sanitize our mouths”

Another young man said that it was high time the suspension of all classes of liquor license be lifted because it creates more frustration in the country since some people are already struggling to cope with the loss of their jobs.

However, the sight of people on long lines to purchase alcohol beverages was not a pleasing one to many, who wondered why some people would go through all that hassle to purchase something which they say has no real nutritional value.

Lifting of COVID-19 liquor ban in St Lucia being considered

Say no to alcohol for now! 4 Myths about alcohol and COVID-19