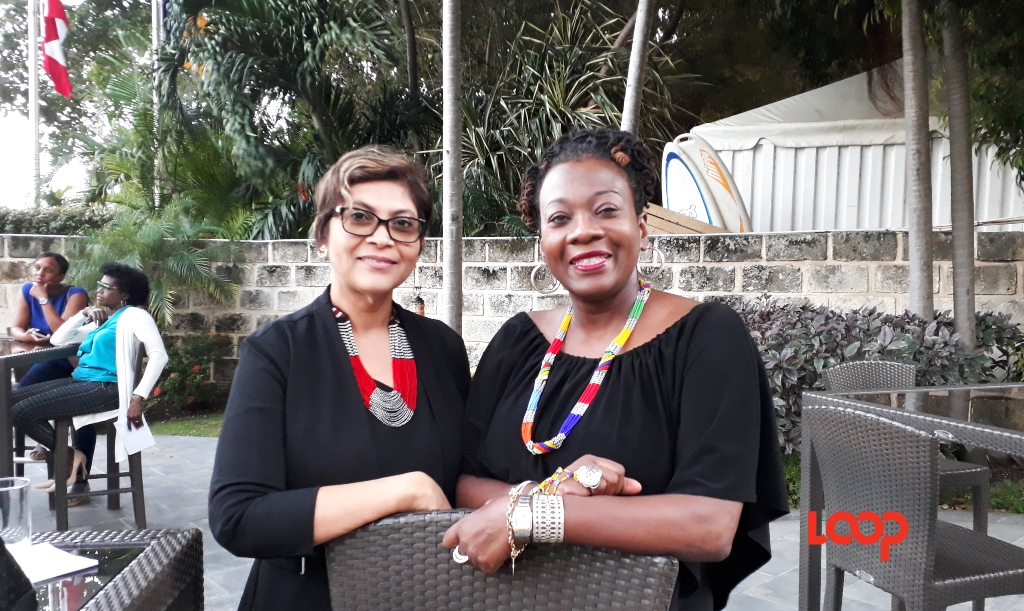 Justices Jacqueline Cornelius and Lisa Ramsumair-Hinds may serve in different Caribbean jurisdictions but they share the same passions for judicial reform and activism against gender-based violence, especially against women and girls, not only regionally but also globally.

Both women serve as court officials for the High Courts of their respective island nations, Cornelius in Barbados and Ramsumair-Hinds in Trinidad and Tobago. They are also trainers, focused on gender-sensitive adjudication, for the Canadian-funded Judicial Reform and Institutional Strengthening (JURIST) Project in the Caribbean program aimed at improving regional court governance and administration.

Most recently, they worked with Barbados’ judicial officers who attended a two-day workshop on Gender Sensitive Adjudication & Training. Prior to that, they were in South Africa sharing their knowledge with counterparts about gender protocols, sexual offences and sexual violence against women and girls.

Their current activism has taken place against the backdrop of the “16 Days of Activism Against Gender-Based Violence”, an international campaign initiative supported by UN Women and UN Women Caribbean and coordinated annually by the Center for Women’s Global Leadership. This year’s campaign launched globally on November 25, the International Day for the Elimination of Violence Against Women, and ended on December 10, Human Rights Day.

She further noted the training focused on removing barriers to justice and drafted gender protocols, guidelines on sexual offences and best practices, etc., developed by stakeholders of the judiciary across the region under the JURIST Project. They were bringing a “gender lens” to areas where “gender myths” may be common like family law, sexual offences, domestic violence and human trafficking.

“Looking to see the myths and inequities that are particularly prevalent in those areas of law, and training judges in how to avoid those myths, how to examine their own bias and how to overcome their bias through following very specific guidelines and training,” Cornelius explained about the gender-sensitive adjudication training which utilizes trainers from different regional jurisdictions.

Ramsumair-Hinds emphasized that this regional approach included support from the Caribbean Association of Judicial Officers (CAJO) and UN Women. Approximately 50 judicial officers received the specialized training so that they could then serve as trainers for their colleagues participating in the program. For example, Magistrate Carl Quamina, from Trinidad, also lead training at the workshop with Cornelius and Ramsumair-Hinds.

Ramsumair-Hinds further highlighted a recent trip to South Africa, in which she was able to share her knowledge at a UN Women South Africa conference about the issue of gender and sexual violence against women, which is a global issue. She believed that this type of cross-regional, cross-country knowledge sharing was making a difference in addressing these global issues and pushing judicial officers to be better in their respective areas.

While acknowledging that “every type of capacity building will take time to build and effect change”, Ramsumair-Hinds cited observed changes in approach and reasoning in participants at the December session who took part in the JURIST Project first training session in July. “It will take time, but I know that we’re getting there,” she added.

“When you enhance human rights, when you have the access to justice that people are entitled to it is actually less exhausting. You know what is exhausting? Injustice and inequality,” stated Cornelius, when queried whether as judicial activist and in the ongoing fight against gender violence they sometimes felt exhausted. Bringing about improvements to the judicial systems as “upholders of the law” and creating an equitable and accessible environment for their constituents was “rewarding,” she added.

“What helps us to recover quickly is that we always keep the end in mind. The bottom line is that once there is no consequences in violence against women and girls it will continue with impunity. So, we keep addressing what we can do, what we can do from our position as judicial officers to bring about an end to gender violence, and once you keep that goal in mind, you keep going towards it,” noted Ramsumair-Hinds.