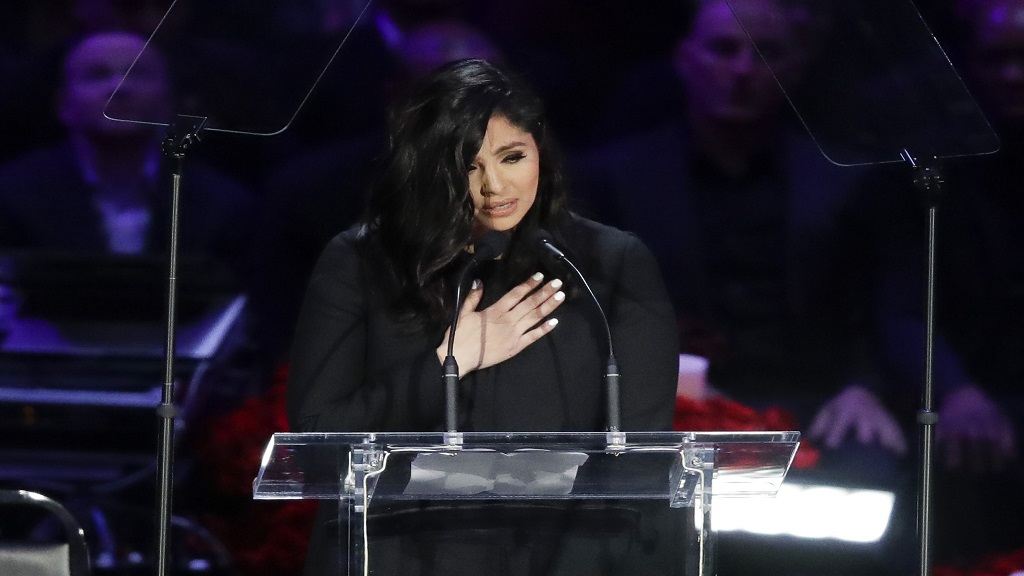 Vanessa Bryant speaks during a celebration of life for her husband Kobe Bryant and daughter Gianna Monday, February 24, 2020, in Los Angeles. (Photos: AP)

Kobe Bryant’s wife remembered him as a devoted father and husband who arrived early for school pickups and wrote heartfelt cards and letters.

Rob Pelinka, Bryant’s longtime agent and closest friend, recalled getting a text from the NBA superstar moments before he was killed last month in a helicopter crash. The message asked for help in securing an internship for another friend’s daughter.

Michael Jordan called Bryant “a little brother” and said when he died, "a piece of me died.”

Bryant's athletic achievements were only part of the reason that 20,000 Lakers fans gathered Monday for a public memorial service at Staples Center in downtown Los Angeles. The event offered another chance to honour Bryant, his 13-year-old daughter, Gianna, and the other seven victims of the crash with tears, memories and laughs. 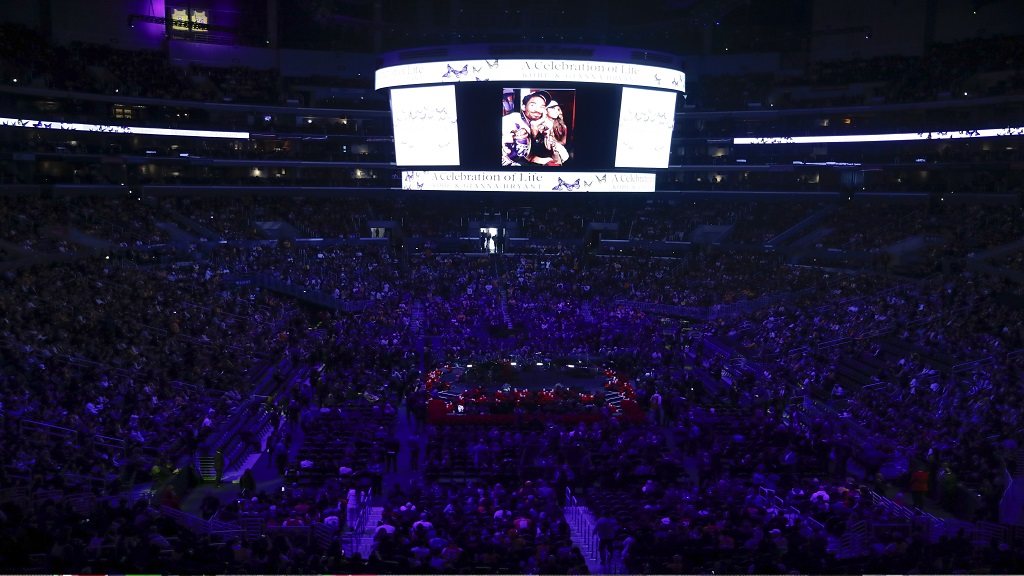 Fans arrives for a celebration of life for Kobe Bryant and his daughter Gianna.

Los Angeles already knew that Bryant was much more than a basketball player. His friends and family told the world.

“I couldn't see him as a celebrity, nor just an incredible basketball player,” Vanessa Bryant said. “He was my sweet husband and the beautiful father of my children. He was mine. He was my everything.”

The ceremony included musical numbers by Beyonce, Alicia Keys and Christina Aguilera. The event concluded with a screening of “Dear Basketball,” Bryant's Academy Award-winning short film about reluctantly saying goodbye to his passion upon his retirement from the Lakers in 2016.

Fans, many wearing Bryant's jersey or team colours, filled the seats at the downtown arena where Bryant played for the final 17 seasons of a two-decade NBA career spent entirely with Los Angeles' most popular sports franchise. 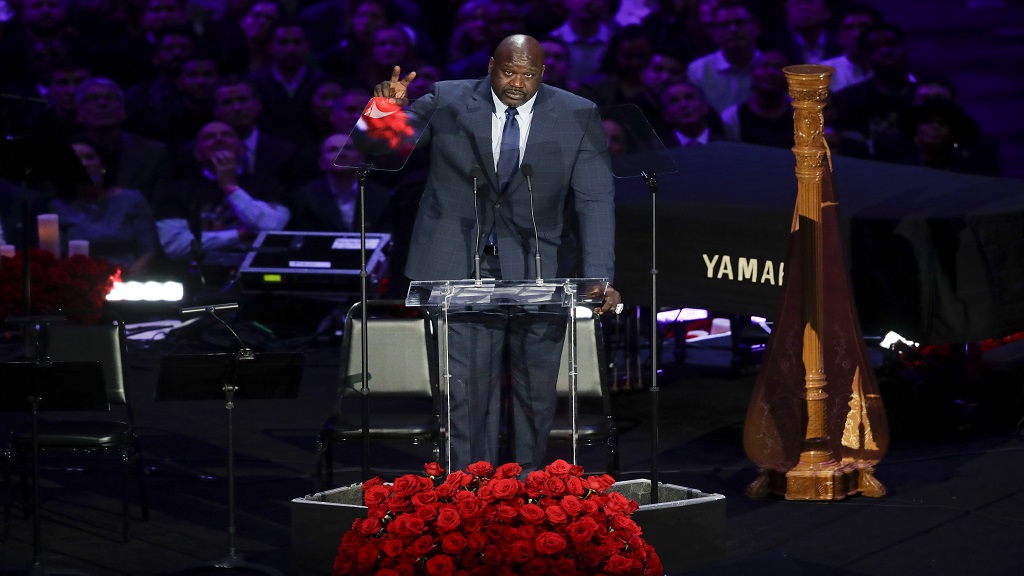 Shaquille O'Neal speaks during the function.

After Jimmy Kimmel welcomed the crowd, Vanessa Bryant provided a poignant window into the family's life with Gianna and her three sisters — Natalia, Bianka and Capri.

“God knew they couldn't be on this Earth without each other,” said Vanessa Bryant, who had been with Kobe since 1999. “He had to bring them home to have them together. Babe, you take care of our Gigi. And I got Nati, Bibi and Coco. We're still the best team.”

Vanessa Bryant was followed on the podium by basketball stars Diana Taurasi and Sabrina Ionescu and University of Connecticut women's coach Geno Auriemma. Kobe Bryant was a passionate advocate for women’s basketball, and Gigi Bryant was a promising young player who aspired to play at UConn. 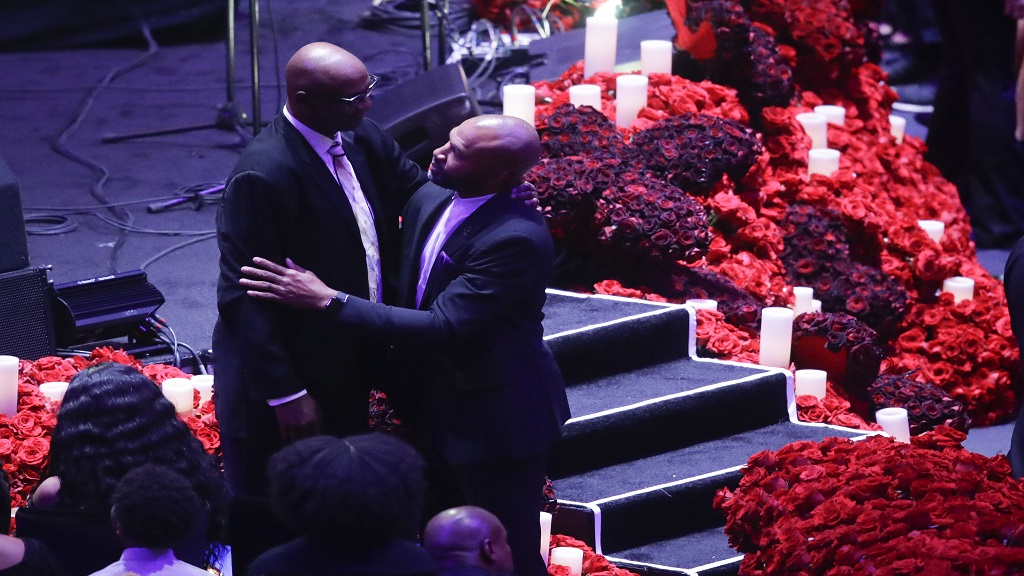 Pelinka referred to the day of the crash as “when the axis of the world seemed to shift forever, for all of us.” Pelinka was also Gigi Bryant’s godfather, and the families were close.

He revealed that Bryant had texted him asking for help in getting an internship with a baseball agent for teenager Alexis Altobelli, who lost her parents and younger sister in the crash moments later.

“Kobe lived to make other people’s lives better, all the way up to his final text,” Pelinka said. 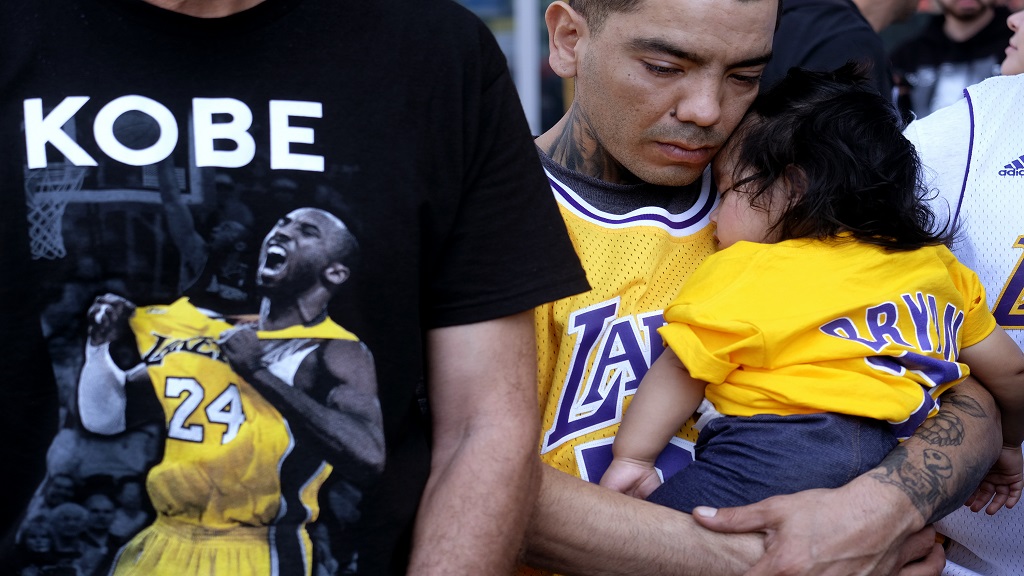 Erik Dominguez holds his 11-month-old daughter Isabella while watching the live stream of the public memorial for Kobe Bryant and his daughter, Gianna, outside the Staples Center in Los Angeles.

Jordan, the Chicago Bulls star whose career was wrapping up as Bryant's was starting in the late 1990s, praised Bryant as “one of my dear friends. He was like a little brother. ... As I got to know him, I wanted to be the best big brother that I could be."

O'Neal and Bryant joined the Lakers together in 1996 and won three consecutive championships during eight tumultuous seasons in purple and gold. Although their relationship was often rocky in public, O'Neal said the two were always friendly in private, even comparing their dynamic to John Lennon and Paul McCartney.

Calling Bryant “a loyal friend and a true Renaissance man," O'Neal said the pair "pushed each other to play some of the greatest basketball of all time.”

O'Neal also got the biggest laugh in the somber service with a profane joke about an exchange in which Shaq told Kobe there was no “I” in team, but Bryant responded by noting that there is an “M-E.” 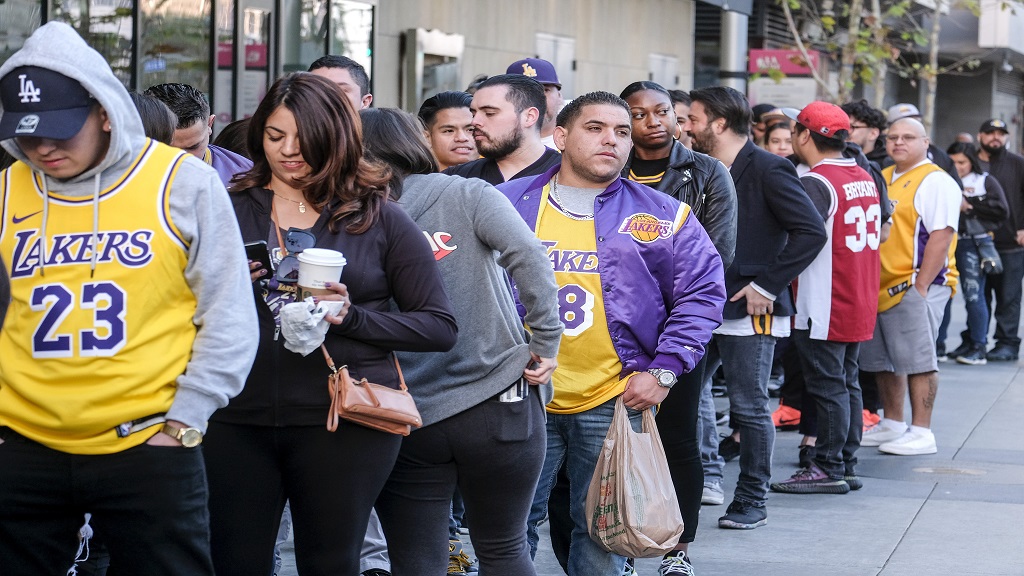 Fans line up to get into the Staples Center to attend the public memorial.

The ceremony began with Beyonce performing her songs “XO” and “Halo" with dozens of backup musicians. Keys performed Beethoven's “Moonlight Sonata” later in the programme, and Aguilera sang “Ave Maria.”

The five-time NBA champion's two retired jersey numbers — 8 and 24 — hang high above the arena where he became the third-leading scorer in league history. Lakers star LeBron James surpassed him on the night before Bryant's death.

Hours before the service, Vanessa Bryant sued the owner of the helicopter that crashed in the fog. The wrongful-death lawsuit claimed that the pilot, Ara Zobayan, was careless and negligent by flying in cloudy conditions.

Money from ticket sales at the sold-out memorial will be given to the Mamba and Mambacita Sports Foundation, which supports youth sports programmes in underserved communities and teaches sports to girls and women.

Samantha DeJesus, 32, and her brother George Galano, 31, paid $448 for their two seats. DeJesus said she got notified late that she had received tickets in a lottery and wasn’t sure if she wanted to pay that much.

But the siblings, who saw their first Lakers game at the Forum against the Utah Jazz in the 1990s, said they couldn’t miss it.

DeJesus called the ceremony “very emotional” and cried throughout.

“I loved every single eulogy that was given,” she said. “You knew it was meant from the heart.”

Galano, who was moved by the rendition of “Moonlight Sonata” by Alicia Keys, said he’s struggled to accept the tragedy since January 26 and the memorial brought him closure.

“Now it’s just reality,” he said. “I’m glad they did this so we could move on and heal.”