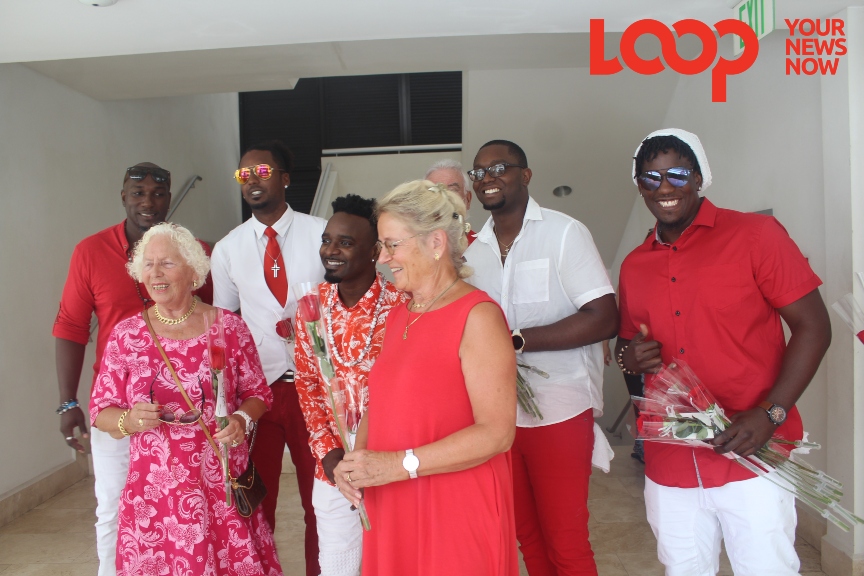 Smartly outfitted in the reds and whites synonymous with the season of love, the six males of the talented group proved to be a pleasure for both the eyes and the ears. As they roamed the halls, they serenaded several lucky shoppers who patronized the businesses that call the Lifestyle Centre home.

They even entertained special requests from diners celebrating birthdays, bringing additional smiles to faces with personalized renditions of “Happy Birthday to You”.

However, the main musical extravaganza took place against the beautiful backdrop of the Waterfall Courtyard where G-Syndicate once again proved there was nothing traditional, or comparable, about their talent.

The group’s versatility was clear as they belted selections from across several genres. Patrons were treated to a diverse set which included covers of Shai’s “If I Ever fall in Love Again”, “Beres Hammond’s “No Disturb Sign” and even Chaka Khan’s “Ain’t Nobody”. One of their original songs “Good Lovin’” was similarly well received from those who gathered to enjoy and capture their performances on their electronic devices.

One thing that must be said about the band is with each arrangement they showcased a ‘freshness’ that enhanced every delivery. Their seamless transitions between genres, blending romantic ballads with groovy reggae renditions and then transitioning to uptempo beats, left the courtyard audience in awe.

“It’s always a pleasure to be invited back to Limegrove. The response from patrons is always refreshing and the distribution of roses adds another dimension to the entire experience. Although some ladies seemed a bit apprehensive about receiving a rose while in the company of their significant other, they readily accept once they realize that the rose is provided compliments of Limegrove Lifestyle Centre. Our song selection complements the ambience here and we are always well received. It’s an event G-Syndicate looks forward to yearly.”

The rousing applause received, whistles of appreciation and even the sporadic instances of dancing suggest that G-Syndicate was once again successful in spreading the love throughout the luxury lifestyle centre.

Upon completion of their courtyard concert, one patron was overheard saying “Are they finished already? I could listen to them all evening!”

WATCH: Something for everyone at G-Syndicate Christmas Concert