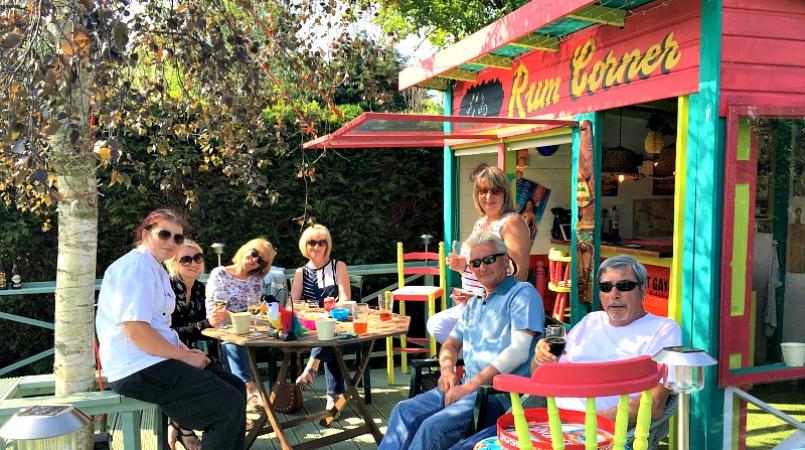 The couple from Kent, England was honoured in July 2016 on their 25th visit to Barbados.

Trinkets, food and liquor samples, and other small tokens are the typical holiday souvenir, but for Kent couple Nicholas and Deborah Siminson it was simply not enough.

They have built a ‘Rum Corner’ in their backyard in Teynham, inspired by the iconic Barbados rum shop.

Their unique watering hole has garnered some media attention back in England, as it has been entered into a competition to be featured on popular UK TV show, George Clarke’s Amazing Spaces.

According to the Kent Online, the Siminsons, who visit Barbados once a year, are big fans of the show.

Mr. Siminson told that publication: “We always watch it every year and thought it would be nice to do a similar project that would bring a bit of the Caribbean to England.

They’ve labelled the bar ‘Rum Corner’ and filled it with memorabilia from their travels, such as maps, posters, a Banks Beer calendar and – of course – Bajan rum.

They use the space to entertain friends who enjoy having a taste of the Caribbean.

“Everyone loves it though and we get nothing but compliments, which is nice, especially given the amount of hard work that went into it,” Siminson told Kent Online. “My wife says the only thing that’s missing is the sand.”

The Barbados Tourism Product Authority (BTPA) regularly treats loyal visitors to the island and according to tourism officials, the Siminsons were honoured on their 25th visit to Barbados in July 2016.