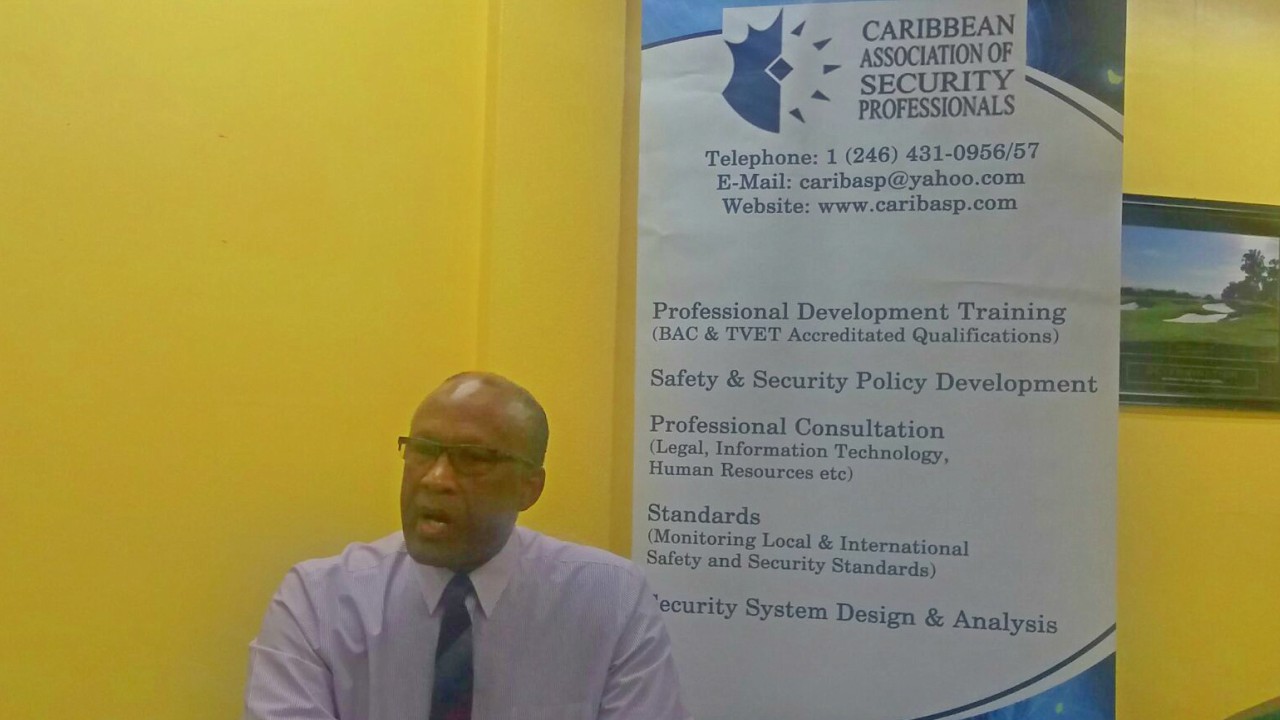 Make better use of technology to help protect the public from criminals!

This was the assertion of Oral Reid, Executive Director of the Caribbean Association of Safety and Security Professionals (CASP), who is making a case for the use of closed-circuit television (CCTV) cameras in a number of scenarios to improve security.

He questioned the security measures in place at many ATMs around the island, saying the CASP is concerned about a number of issues, including "the lack of adequate CCTV coverage at the ATM machines".

Last month, 58-year-old Colleen Payne died after being shot at an ATM in Black Rock, St. Michael. Three teens have been charged for her murder.

Reid noted today, "It is alright to say or to assume that there may be camera coverage within the facility such that you can see who is doing a transaction, but what about the external of the facility?"

Asked who would be responsible for holding commercial banks accountable for the installation and location of these systems of convenience, Reid maintained that measures must be put in place to ensure they are accountable for the security around ATMs:

"We are at the juncture now where we have to make a decision on matters of these types, since we have seen enough crimes occur in Barbados to encourage us to begin to focus on this, such that we continue to provide a safe environment for people who may wish to continue using ATM machines and to see them as the convenience they are for after banking hours business transactions.

"It must be done in a safe manner and we believe that commercial banks ought to be held responsible."

Emphasising that CCTVs need to cover more than the point of transaction, Reid added that better lighting is also an issue in the immediate environs of the ATMs.

He illustrated, "I was even prompted by a member of the Board to take a look at an ATM machine that is located in the parish of St Philip... where given the location of that ATM machine it is wide open and the persons doing the transaction can never see who is behind or beside or will run to snatch what they have taken from the machine. And therefore it has brought us to this point."

Reid also asserted it was time CCTV be used generally to supplement security forces on the ground in public spaces.

Conveying CASP's concern about recent violent crimes that have taken the alarming turn of causing injury to innocent bystanders, he said:

"We strongly believe that the time has come when the policing of these events must move beyond just the police officers at venues and that we ought to embrace aspects of electronic security solutions."

A number of armed men pursued a 20-year-old Tareid Rock on to the crowded Spring Garden Highway at the end of Grand Kadooment, killing him and leaving at least 18 others with gunshot injuries. Then on Friday, a gunman targeting another man in Fairchild Street Market resulted in a nearby woman being shot in her leg.

While suggesting a range of measures to arrest this problem, Reid outlined the use of technology in helping police to identify those perpetrators. He contended that those involved in the Spring Garden shooting would have been known by now if the island had a better network of closed-circuit television (CCTV) cameras.

He therefore recommended the use of electronic security solutions "which will see us deploying cameras at strategic points, especially when it is recognised that you are going to have a national event that is likely to attract thousands of persons."

He concluded, "I believe that if there had been cameras deploying in the areas identified, we might have been in a position to identify the perpetrators of these acts. I am therefore calling for a review of the manner in which national events are policed."