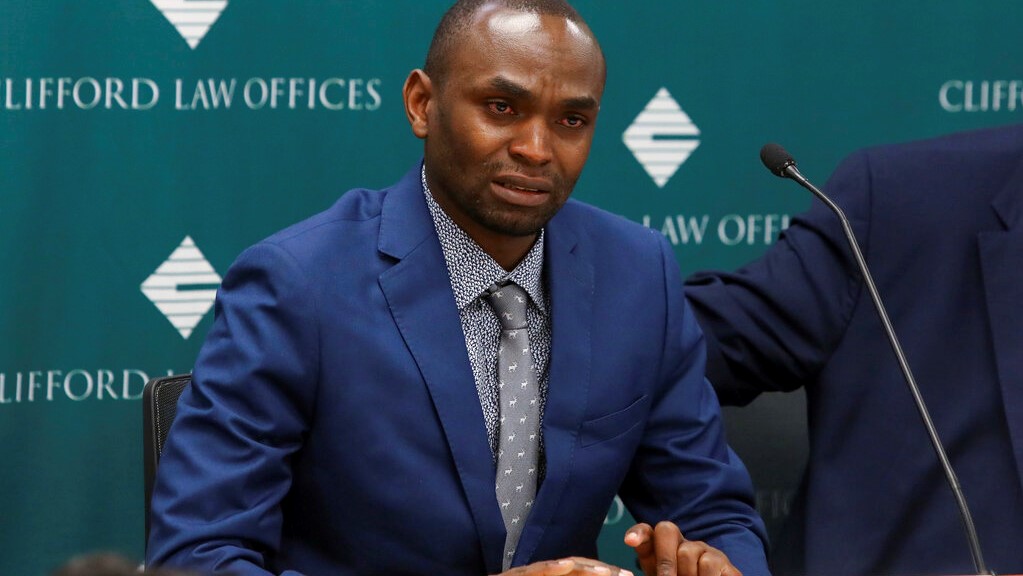 In this April 29, 2019, file photo, Paul Njoroge, who lost his wife and three young children in the March 10 crash of an Ethiopian Airlines' Boeing 737 Max 8 aircraft, speaks at a news conference in Chicago. (AP Photo/Teresa Crawford, File)

A man who lost his wife, mother-in-law and three young children in the crash of a 737 Max in Ethiopia says Boeing should scrap the plane and top executives should resign and face criminal charges.

Paul Njoroge, who is due to testify before Congress in the U.S. on Wednesday, said in an interview that 737 Max planes should have been grounded after a deadly crash off the coast of Indonesia in October. Instead, they kept flying until another crashed five months later near Addis Ababa, Ethiopia, shortly after takeoff, claiming the lives of his family and 152 others.

If Boeing and the Federal Aviation Administration had done their jobs properly, Njoroge said, "these planes would have been grounded in November and today I would be enjoying summer with my family, I would be playing football with my son."

Njoroge (ja-ROW-ga) will be the first relative of any of the 346 passengers who died in the two crashes to testify before Congress. He will be accompanied by Michael Stumo, whose daughter, Samya, also died in the March 10 Ethiopian Airlines crash. The Max has been grounded worldwide since shortly after that crash and it's not clear when it will be certified to fly again.

In testimony he submitted to the House aviation subcommittee, Njoroge says passengers' families have several demands that must be met before the Max is allowed to fly again, including a new, top-to-bottom review of the plane by regulators.

In an interview, Njoroge went further, saying the plane should never fly again because of what he considers an irredeemable design flaw.

Because the size and placement of the plane's engines raised the risk of an aerodynamic stall, Boeing devised flight-control software called MCAS. Preliminary reports indicate that the software pushed the nose of the plane down in both crashes, and Boeing is working on changes to make MCAS more reliable and easier to control.

Boeing did not tell pilots about MCAS until after the first crash, in October off the coast of Indonesia.

"They didn't want people to know about the design flaw, and that's why they kept the existence of MCAS hidden," Njoroge said.

"I'd like to see (Boeing CEO) Dennis Muilenburg and the executives resign because they caused the deaths of 346 people," Njoroge said. "They should be held liable criminally for the deaths of my wife and my children and my mom-in-law and 152 others in the crash of Ethiopian Airlines flight 302 because that was preventable."

Chicago-based Boeing said it lamented the impact that the crashes are having on families of those on board.

"These incidents and the lives lost will continue to weigh heavily on our hearts and on our minds for years to come," the company said in a statement. "We are committed to working with the communities, customers and the aviation industry to help with the healing process."

Njoroge was born in Kenya and now lives in Toronto, where he works as an investment professional. A Chicago aviation lawyer, Robert Clifford, sued Boeing on his behalf over the deaths of his wife, Carol, his son and daughters, 6-year-old Ryan, 4-year-old Kelli and 9-month-old Rubi, and his wife's mother.

They were on their way to visit family in Kenya when the Nairobi-bound plane crashed.

Njoroge accused Boeing of trying to shift blame to foreign pilots in Indonesia and Ethiopia to avoid grounding the Max, which he called "utter prejudice."

After the October 29 crash involving Indonesia's Lion Air, Boeing issued a bulletin to pilots reminding them about Boeing instructions for handling a nose-down pitch of the plane. After the Ethiopian crash, Muilenburg said the pilots did not completely follow the procedures. The preliminary report indicated the Ethiopian pilots tried the procedures nearly until the end but could not save the plane, and they were flying extremely fast.

Muilenburg has repeatedly apologized in public to families of the passengers. Njoroge said he has not received personal condolences.

"It would be very important if Boeing executives can meet with the family members in person and apologize to them," he said. "That would help."

Wednesday's hearing will be the House aviation panel's third on the Max. Other witnesses will include representatives from the National Transportation Safety Board and unions representing pilots, flight attendants, airline mechanics and safety inspectors.

The jet's grounding is meanwhile having an impact on airlines around the world, with Europe's busiest carrier, Ryanair, saying Tuesday it will cut flights and close some bases beginning this winter because of the delay to deliveries of the Boeing planes. It expects the Max jets to be back in service before the end of the year, though the date is uncertain.

American Airlines and United Airlines this month both said they will keep the Boeing 737 Max plane off their schedule until November 3, leading to flight cancellations.