Man of the Year 2017 announced 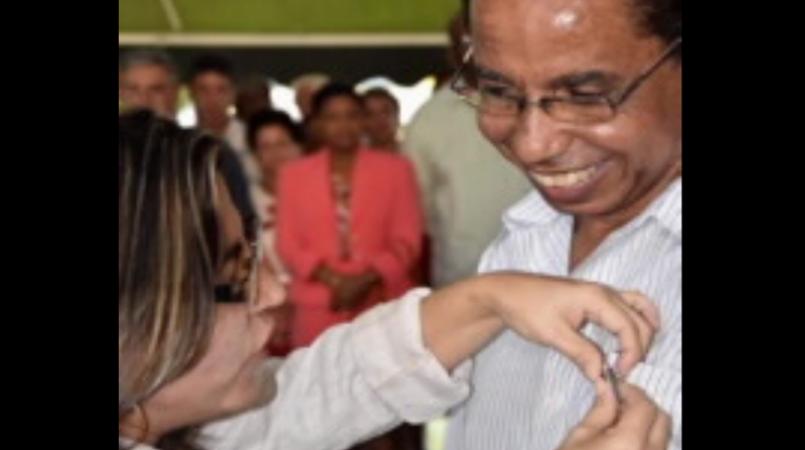 He has dubbed himself the ‘Minister of Responsibility’ and this year he truly took a stand for the Barbadian people on numerous occasions.

He goes against the grain.

Related article :Comissiong to PM: You are wrong!

His opinion may not be popular but once he has grounds, he will go to the end for a cause he deems worthy.

Vincentian by birth, Attorney-at-law, social activist and Pan Africanist David Comissiong is Loop’s Man of the Year 2017 for Barbados.

This year, Comissiong proved that ‘knowledge is power’ and on that note, he could even take the title for Most Powerful Man of 2017 locally.

Never coming to the table without stats, facts and proof, this year he showed that he is not a man to be intimidated, no matter how big the challenge.

He spoke out when Barbadian dancers based in Barbados were left off of the big CARIFESTA XIII stage. He called it a ‘travesty’ and he asked if the organisers and Culture Minister were saying that local dancers who have travelled the region to dance in some instances, were not good enough for the CARIFESTA XIII stage. And eventually, though through invites by regional acts, his dream of seeing locals on that platform was attained.

When the statue of Lord Nelson was vandalized he was quick to point out to Loop News that the people of Barbados have called for the statue's removal already. There were town halls and a commission, all that was left to do, was to do the people’s bidding. Yet, Nelson still stands in National Heroes Square, formerly Trafalgar Square in Bridgetown.

But the biggest win for Comissiong this year and the most public display of his acumen and prowess as a lawyer was when he took on the Hyatt challenge.

The Attorney-at-law walked up the steps to the High Court to file two motions in the space of two months to halt building construction on the Hyatt Centric in The City.

Comissiong filed applications for an injunction challenging the permission granted by Prime Minister the Rt. Hon. Fruendel Stuart, who has responsibility for Town and Country Planning matters, for construction to begin. Construction work on the Hyatt officially began on March 15, and Comissiong went to the High Court in March and again in April.

The case was adjourned many times, and dragged on throughout the year, but on Wednesday, December 20, 2017, parties involved in the case went before Justice Sonia Richards in the Supreme Court to hear the ruling for whether Comissiong has the legal standing to challenge Stuart’s decision, as Minister responsible for Town and Country Planning matters, to grant building permission to Vision Development for construction of the Downtown Hyatt Hotel. The Judge ruled in Comissiong’s favour.

Comissiong told the media he firmly believes he has been appointed as “Minister of Responsibility” and he intends to act in the best interest of Barbadians in upholding justice.

“We are all called upon humbly to be ministers of love and justice and righteousness and all of us must resolve to be the protectors of our country to where we believe that something is going wrong… to do God’s will in an active, determined manner.”

“What I am doing with this case, I am doing it in humility and I am seeking to be a minister of justice and righteousness, I am trying to look out for the best interest of this country.”

The defendants have appealed the Judge’s decision and Comissiong said, as he prepares to enter into more legal proceedings, he is maintaining that the decision by Stuart was made in the absence of an Environmental Impact Assessment (EIA) and it needs to be revisited.

He may have only won the battle so far, but he assures he’s ready for the war.

Related article :Rihanna wins 2017, and not with music

This year Comissiong also called on parents and guardians to challenge to the sudden closure of the Alma Parris School, and he spoke out on the Venezuelan crisis as well.

Not one to stand on the sidelines, he even voiced his opinion as it relates to West Indies cricket. Stating that he is in complete agreement with the former captain of the West Indies cricket team, Darren Sammy, he called for changes to the West Indies Cricket Board and believed that the current WICB president Dave Cameron was no longer fitting to be the Head.

Commissiong bowled some yorkers this year, sent people’s stumps flying on occasions and even killed some projects’ progress, with his words, demonstrating that ‘the pen is mightier than the sword’.

In addition to being named Man of the Year 2017 by Loop News, this year he was awarded the Medal of Friendship by the Cuban Institute of Friendship with the People (ICAP). He received the award for his support for Cuba over the years. Comissiong is a founding member of the Cuba-Barbados Friendship Association and is the current Coordinator of the Caribbean Chapter of the International Network of Intellectuals, Artists and Activists In Defence of Humanity.