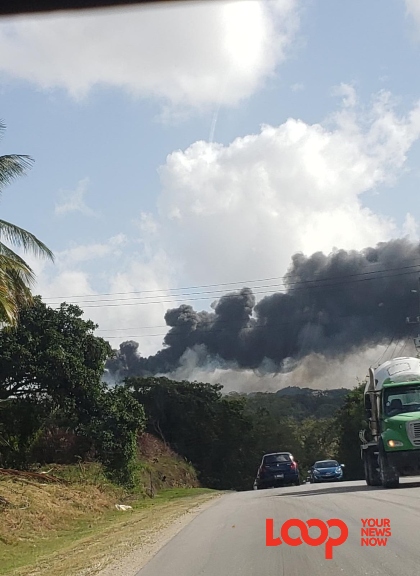 Billowing smoke could be seen coming from the Mangrove landfill

The fire at the Mangrove landfill is raging again.

This would be the second consecutive day that the Sanitation Service Authority (SSA) is battling with fire at the St Thomas location. Just before 4.30 pm the resumption of billowing smoke alerted those in the surrounding areas that all was not well at the island’s dumping site as was to be expected after some of the promises of the SSA yesterday. However, it was reported that this afternoon’s blaze was as a result of a grassy area and some small tyres which reignited.

In a statement to the press Communications Specialist for the SSA, Carl 'Alff' Padmore disclosed, “This afternoon a spark ignited a grass section over by the landfill in the same area where we had actually brought the fire under control. It’s a small grass area and the [Barbados] Fire Service is on the scene.” Padmore went on to give the assurance, based on information received from the Fire Service, that the fire would be extinguished in a short space of time. He assured that the situation was under control.

As motorists traversed the stretch of highway closest to Arch Hall, swelling black smoke loomed above. However, Padmore assured, “The black smoke you are seeing is posing, at this stage, no major hazard to the residents in Arch Hall.”

The Communication Specialist went on to thank the residents of Arch Hall for their patience and urged them to continue exercising whatever caution they deemed fit, considering the situation. He said that the projected time for total containment is 9 pm tonight. Originally the SSA had projected it would take a total of two days to bring yesterday’s blaze under control.

'We've been at this juncture before': SSA working to contain tyre fire