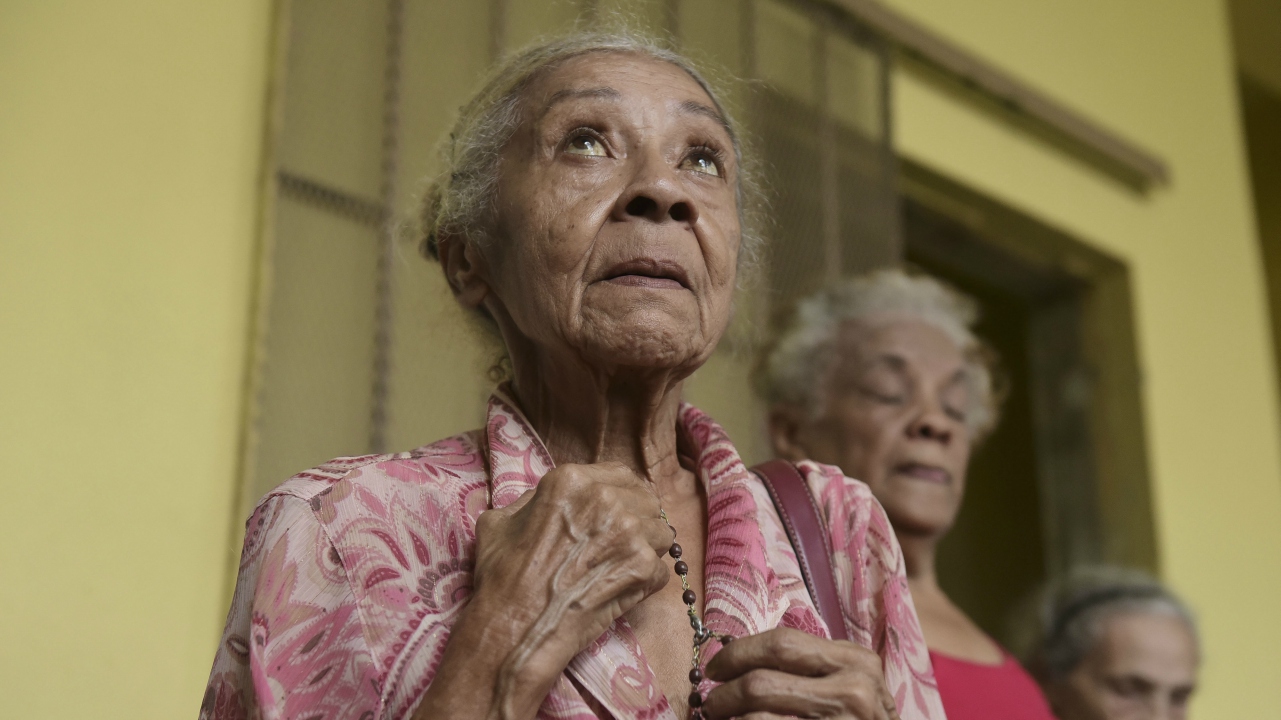 A woman seeking shelter prays her rosary at the Juan Ponce de Leon Elementary School before the arrival of Hurricane Maria, in Humacao, Puerto Rico, Tuesday, Sept. 19, 2017. Puerto Rico is likely to take a direct hit by the category 5 hurricane. Authorities warned people who live in wooden or flimsy homes should find safe shelter before the storm's expected arrival on Wednesday. (AP Photo/Carlos Giusti)

The latest on powerful Hurricane Maria (all times local):

The National Hurricane Center in Miami says an Air Force Reserve hurricane hunter plane took the reading Tuesday evening as the storm was about 70 miles (115 kilometers) southeast of St. Croix.

Maria is moving west-northwest at 10 mph (17 kph), and is expected to pass near the U.S. Virgin Islands on Tuesday night and hit Puerto Rico on Wednesday.

An even stronger Hurricane Maria is moving steadily toward the Virgin Islands and Puerto Rico and is likely to still be a powerful category 5 storm when it arrives.

The National Hurricane Center in Miami reported that Maria's winds had intensified to 165 mph (265 kph) late Tuesday afternoon, and that some additional strengthening was possible Tuesday evening.

A hurricane warning was in effect for Puerto Rico and the U.S. and British Virgin Islands, as well as St. Kitts, Nevis, and Montserrat and portions of the Dominican Republic.

Hurricane center forecasters say it "now appears likely" that Maria will still be at category 5 intensity when it moves over the U.S. Virgin Islands and Puerto Rico.

The center of the hurricane was forecast to move near or over the U.S. Virgin Island of St. Croix and Puerto Rico on Tuesday night and Wednesday, bringing with it "life-threatening" flooding from rain and storm surge.

France's interior minister has made an initial damage assessment after Hurricane Maria passed over two French Caribbean islands and says at least 150,000 homes are without electricity.

Interior Minister Gerard Collomb said in Paris on Tuesday that the hurricane left 80,000 households in Guadeloupe and 70,000 in Martinique without power.

The extent of the damage from Tuesday's hurricane is yet to be assessed on those islands and in Guadeloupe. Collomb says Martinique's airport is still operating.

The Guadeloupe prefecture said earlier that one person died and two others were missing there. Collomb said there were three people wounded in Martinique, including one seriously.

The center said the hurricane was expected to remain an "extremely dangerous" category 4 or 5 hurricane when it passes near or over the Virgin Islands overnight, and Puerto Rico on Wednesday.

An official from the Caribbean island of Dominica says officials have been told that extremely powerful Hurricane Maria tore the roofs off 70 percent of the island's homes and that there have been unconfirmed reports of deaths.

Consul General Barbara Dailey told The Associated Press in a phone interview from New York that officials have not been able to reach anyone on the island since 4 a.m. Tuesday and that they are extremely concerned.

Maria swept over the island overnight as a Category 5 storm, the highest on the Saffir-Simpson Hurricane Wind Scale.

Dailey noted that her house on the island lost its roof, as did the official residence of the prime minister, Roosevelt Skeritt.

She says Dominica will be in desperate need of aid and emergency supplies in the coming days.

Officials say one person has died on the French Caribbean island of Guadeloupe after being hit by a falling tree.

It's the first death attributed to Category 5 Hurricane Maria.

Authorities say the person did not comply with orders to remain indoors on Tuesday morning. They say two other people are reported missing after their boat sank off La Desirade island, just east of Guadeloupe.

About 40 percent of the island is without power. That's 80,000 homes. Flooding has been reported in several communities, especially along the southern coast.

Officials say Les Saintes, Marie-Galant, Petit-Bourg and La Desirade have been the hardest hit. Roads are littered with fallen branches and trees but only limited infrastructure damage has been reported.