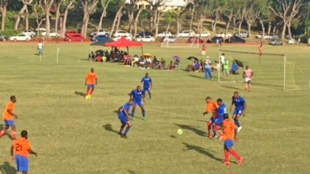 These are the key ingredients for a top quality, unforgettable and successful football tournament, at least according to tournament organizer of the Banks International Masters Football competition Paul “Starsky” Wright.

Wright spoke to Loop Sports on the final day of competition of the 22nd edition of the tournament, which saw X-men repeat as champions in the Over 50 division and their “Trini” brothers Era Masters winning the Over 40s for the first time; making it a clean sweep for the twin-island republic.

Since staging the inaugural event 22 years ago, Wright stated they have had some issues, but managed to handle them with the help of his trusted colleagues Adrian “Ockey” Donovan and Grant “Doom” Trebble.

“Our number one expense is transportation, but we provide the buses for all the teams.  The buses arrive two hours prior to kick-off, teams are awarded ten minutes grace period, after that the bus leaves, because we want teams to be here an hour before their match kicks off.

"It has cost a fortune to transport everyone to the west coast, but we have never had a late kick off in 22 years”, said Wright.

After two decades of consistency, the tournament organizers have done what no other Caribbean nation has done. That is to go consecutive years of staging the competition and as Wright stated, the unique atmosphere and professionalism ensures that happens.

He added the tournament does not only have sporting benefits and implications for the country but also plays it part financially:

“We brought in over 800 people for five to 14 days.  We estimate about three million dollars in foreign exchange is being brought into the island because of this [the tournament].

We have six teams from Canada, four from the USA and one group from the UK which has 45 people."

He said based on the positive feedback expressed by the majority of players and spectators, the organizers are hoping to stage the 2019 edition at the pristine venue.

Wildey and Wadadah to face off in masters football clash