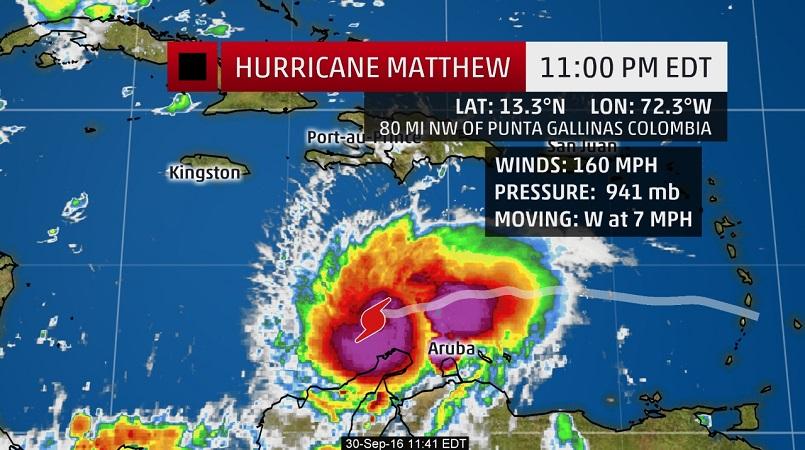 Hurricane Matthew strengthened to a rare Category 5 late Friday evening, and it continues to make its northward passage through the central Caribbean – on a trajectory which could see the storm slamming in to sections of eastern Jamaica and Cuba.

Matthew is the first Category 5 hurricane since Hurricane Felix in 2007, and only the sixth ever category 5 storm to be confirmed in October in the north Atlantic's recorded history.

Of significance, the still strengthening system poses a danger to Jamaica, parts of Hispañola, eastern Cuba and the Bahamas early next week.

The central pressure continues to drop as Matthew intensifies, although not as quickly as was occurring on Friday morning into the afternoon.

A hurricane watch has been issued for Jamaica. Winds of 75 mph or greater are possible on Monday, and tropical storm force winds may begin late Sunday.

A tropical storm warning continues for the northern coast of Colombia. Winds of 40 mph or greater are likely in northern Colombia on Friday evening.

A tropical storm watch has been issued for the southern coast of Haiti from the border of the Dominican Republic to Port-Au-Prince. Tropical storm force winds may begin there by late Sunday.

What has baffled many meteorologists is Matthew’s rapid intensification phase, which saw the system strengthen from a tropical storm to a Category 5 in just 36 hours – but the good news is the hurricane’s  ‘power-up’ may be coming to an end.

According to experts at the National Hurricane Centre in Miami, Florida, some fluctuations in intensity are possible over the next day or so. Matthew may undergo an "eyewall replacement cycle," which occurs when strong bands of wind and rain replace the eyewall of a hurricane. This is common in extremely powerful hurricanes of this stature.

Image credit via The Weather Channel