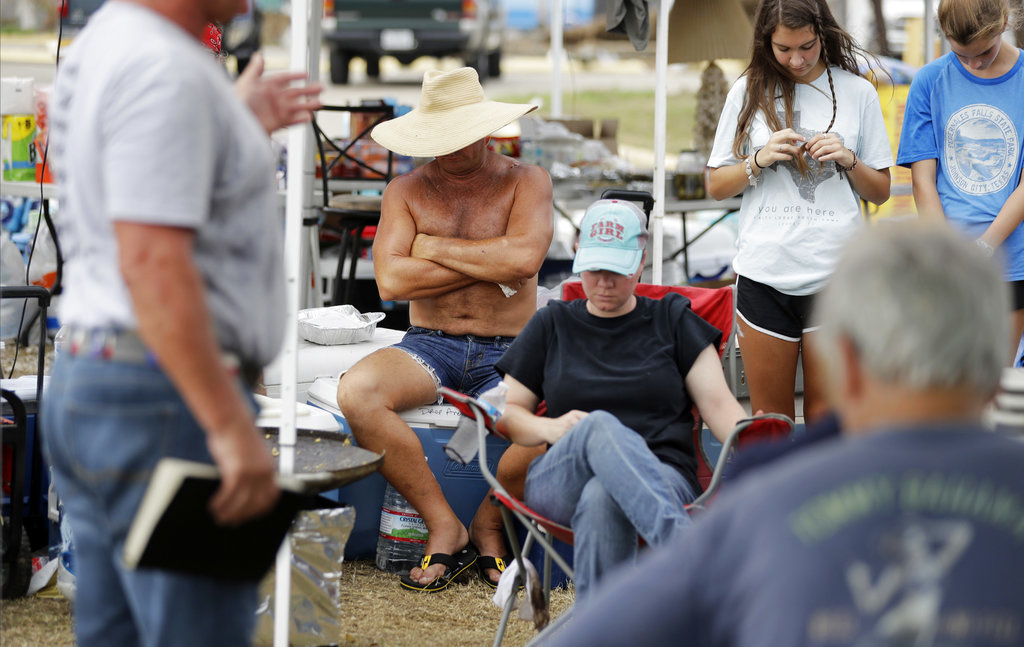 Houston's mayor insists that America's fourth-largest city is "open for business," but with areas under water, people not yet in their homes, and billions in damage to repair, major disasters that Harvey created are by no means resolved.

Mayor Sylvester Turner said much of the city was hoping to get back on track after Labor Day.

"Anyone who was planning on a conference or a convention or a sporting event or a concert coming to this city, you can still come," he told CBS. "We can do multiple things at the same time."

One worry, of further explosions at a damaged chemical plant, eased after officials carried out a controlled burn Sunday evening of highly unstable compounds at the Arkema plant in Crosby. Three trailers had previously caught fire after Harvey's floodwaters knocked out generators.

Authorities said Monday it is now safe for residents of a 1.5-mile (2.4 kilometer) evacuation zone around the Arkema plant to return. They were forced to leave Tuesday.

Floodwaters also have inundated at least five toxic waste Superfund sites near Houston and some may be damaged, though Environmental Protection Agency officials have yet to assess the full extent of what occurred.

Texas Gov. Greg Abbott told CNN the EPA is "working on some of them already," but "they have restraints on their ability to check out some of them just simply because of the water."

Turner said Houston's drinking water hadn't been affected by the storm, but told CBS, "We would hope that the EPA would be on the ground now to take a look at those Superfund sites, to make sure that contamination is contained and limited."

Other issues across the region: too much water still in houses, but no water to drink.

Utility crews went door-to-door Sunday shutting off power and warning those still in some waterlogged homes in western parts of the city that more flooding was possible — not from rain, but from releases of water from overtaxed reservoirs. Thousands of Houston dwellings were under mandatory evacuation orders, though about 300 people were thought to be refusing to leave.

People briefly returned Sunday to some homes in the area, which included brick two-story and ranch homes bordering Buffalo Bayou, to try to salvage valuables.

More than a week since the storm hit, the 4 feet (1.2 meters) of water in her parents' home had receded just a foot (3o centimeters), said Karen Mace. She was trying to retrieve family photos from the one-story ranch her parents built and have lived in for 56 years, which backs up to Buffalo Bayou.

"It came up fast. They had to get out by canoe," Mace said, adding they thought the home would have to be demolished.

Harvey slammed into Texas on Aug. 25 as a Category 4 hurricane, but brought the worst flooding to Houston and other areas as a tropical storm. The rain totaled nearly 52 inches (1.3 meters) in some spots, and the storm is blamed for at least 44 deaths.

In other storm-ravaged neighborhoods, people worried about thefts.

Police in the southwest Bellaire neighborhood received reports of scavengers picking through water-damaged possessions and urged those cleaning up to keep anything left outside to dry closer to their homes and separate from what was considered a total loss. In the suburb of Dickinson, one homeowner used orange spray paint on a sheet of dirty plywood to warn: "Looters Will B Shot."

Meanwhile, repairs continued on the water treatment plant in Beaumont, about 85 miles (140 kilometers) from Houston, which failed after the swollen Neches River inundated the main intake system and backup pumps halted. And outside the town of Liberty, about 45 miles (70 kilometers) from Houston, dozens of people were still cut off by the swollen Trinity River. A Texas National Guard helicopter landed at the local fire department with pallets of drinking water.

President Donald Trump has asked Congress for a $7.9 billion down payment toward Harvey relief and recovery efforts. Abbott suggested the cost of recovery could be as much as $180 billion.

The Latest: Trump says Harvey has 'profoundly' affected US