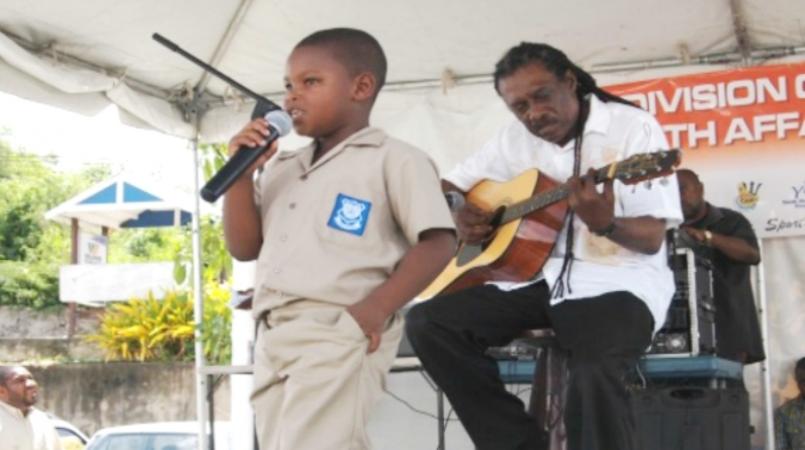 Anthony ‘Mighty Gabby’ Carter has been using his musical talents to assist the students of the St. Paul’s Primary School in charting a positive path forward.

The Mighty Gabby and Kezan ‘Bit Bit’ Walker were one of the entertainment acts at the Ministry of Youth Sports and Culture Open Day. Bit Bit delivered a rendition of Beautiful and Unspoilt backed by Gabby on guitar which was more than well received by the audience and students and Ministry staff.

The veteran folk singer, calypsonian and cultural ambassador spoke with Loop News about the ongoing musical program at the primary school. He explained that it came out of a workshop with other calypsonians such as Red Plastic Bag, Smokey Burke and Kid Site. The program targets children from Class 3 where they study a range of musical disciplines, including song-writing for folk and calypso, stage presence, harmonies and choreography.

He said a challenge was trying to get parents on board with programme as they always thought it would clash with studies.

“At first they [the parents] were a little reluctant because the parents especially near to 11-Plus time always felt that they felt they didn’t want their children involved. But when we explained to them how important it was, and the principal explained the children marks went up sometimes by 20 per cent... once they realised, they started to support us.

"We focus on bringing the best quality that we can to the children, with patience, no shouting or hollering at them or anything like that and instilling discipline and respect and manners.”

He also said the positive results of the St. Paul’s music programme has prompted him to replicate the programme in other primary and secondary schools.

“I am confident that sometime between now and early next year that it can be initiated in other schools. The same programme, but not the same songs, I always try to teach different songs. Right now I go through the schools but we are looking at going through the Ministry to get it into other schools.”

Bit Bit, who has been coming up under the guidance of the Mighty Gabby, will be going on to represent his school at the Richard Stoute Teen Talent contest later this year.