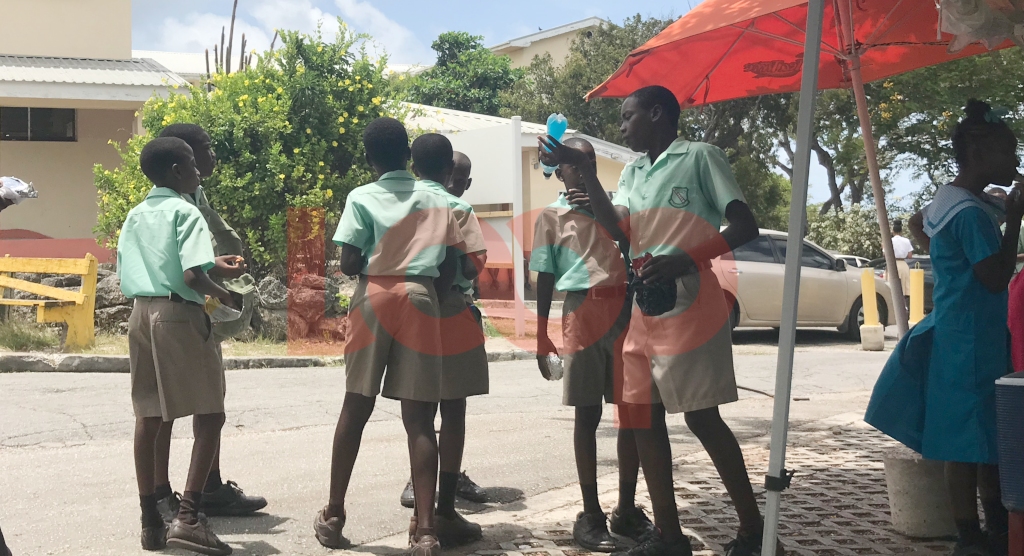 Milton Lynch Boys during the break

Milton Lynch Primary School was impacted by environmental challenges, but the principal and Class 4 teachers refused to let the 11-plus students be knocked off track by the disruption to classes.

The group of boys, aged 10 and 11, were relocated to the Ivan Harewood Centre at the Christ Church Parish Church, a stone's throw away from the primary school’s Water Street location.

The principal of Milton Lynch Primary, Everton Briggs told the media that the preparation was the "usual stuff" with teachers conducting business as usual over the years but in the final year "we had a lot of lessons going on even though the school had the challenges with the environmental issues. We had classes at the Christ Church Church Centre for the Class 4s and that worked out very well,  then in the Easter we had classes here. Those children were well prepared for the examination."

Asked how the school closures affected the students, three mothers who were waiting outside the Christ Church Foundation School this morning while their sons wrote the Composition-part of the Barbados Secondary School Entrance Examination (BSSEE), told Loop News: “It was good”.

They also sang the praises of the school's authorities for the decisions taken.

It was a chorus of agreement among the trio.

On the topic of ensuring that the classes continued seamlessly for the Class 4 boys, one mother went on to explain:

“I think that was really good ‘cause to put the children on break, they would’ve missed out a lot. So I think it was really, really good. I was still glad that the teachers took their time and like my son’s teacher, they would pray and they would do certain things. I think they did really well. So people saying about ‘Milton Lynch this and Milton Lynch that’ but until your child goes there and you get to interact with the teachers it is a whole different thing to on the outside.”

A selected number of students who needed additional assistance also got the opportunity to attend classes and write past papers at Christ Church Foundation School during the Easter break, and one mother said that too was a good move.

“Even with the mock exam they did here, it helped my son. It was good. Milton Lynch is a good school. It just needed the right leadership, but it good.”